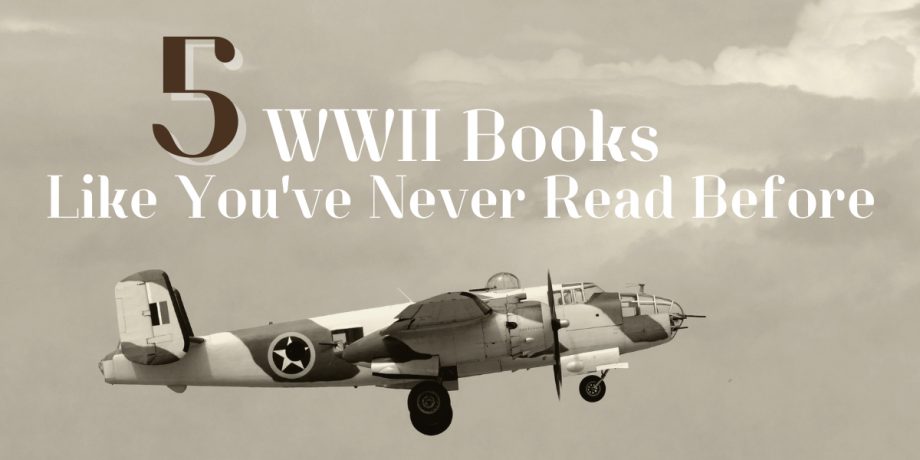 These 5 books are the epitome of WWII like you’ve never read before, trust us 🤯. You know those books that you’d give anything to be able to read them for the first time again? Well, these are those. So grab these incredible reads, curl up with your favorite blanket and prepare yourself for a journey – and feel free to reach out to us anytime, we can go through it together!

The Daughter of Auschwitz by Tova Friedman, Malcolm Brabant

WITH A FOREWORD BY SIR BEN KINGSLEY

A powerful memoir by one of the youngest survivors of Auschwitz, Tova Friedman, following her childhood growing up during the Holocaust and surviving a string of near-death experiences in a Jewish ghetto, a Nazi labor camp, and Auschwitz.

“I am a survivor. That comes with a survivor’s obligation to represent one and a half million Jewish children murdered by the Nazis. They cannot speak. So I must speak on their behalf.”

Tova Friedman was one of the youngest people to emerge from Auschwitz. After surviving the liquidation of the Jewish ghetto in Central Poland where she lived as a toddler, Tova was four when she and her parents were sent to a Nazi labour camp, and almost six when she and her mother were forced into a packed cattle truck and sent to Auschwitz II, also known as the Birkenau extermination camp, while her father was transported to Dachau.

During six months of incarceration in Birkenau, Tova witnessed atrocities that she could never forget, and experienced numerous escapes from death. She is one of a handful of Jews to have entered a gas chamber and lived to tell the tale.

As Nazi killing squads roamed Birkenau before abandoning the camp in January 1945, Tova and her mother hid among corpses. After being liberated by the Russians they made their way back to their hometown in Poland. Eventually Tova’s father tracked them down and the family was reunited.

In The Daughter of Auschwitz, Tova immortalizes what she saw, to keep the story of the Holocaust alive, at a time when it’s in danger of fading from memory. She has used those memories that have shaped her life to honour the victims. Written with award-winning former war reporter Malcolm Brabant, this is an extremely important book. Brabant’s meticulous research has helped Tova recall her experiences in searing detail. Together they have painstakingly recreated Tova’s extraordinary story about the world’s worst ever crime.

The Lipstick Bureau by Michelle Gable

Inspired by a real-life female spy, a WWII-set novel about a woman challenging convention and boundaries to help win a war, no matter the cost.

1944, Rome. Newlywed Niki Novotná is recruited by a new American spy agency to establish a secret branch in Italy’s capital. One of the OSS’s few female operatives abroad and multilingual, she’s tasked with crafting fake stories and distributing propaganda to lower the morale of enemy soldiers.

Despite limited resources, Niki and a scrappy team of artists, forgers and others—now nicknamed The Lipstick Bureau—find success, forming a bond amid the cobblestoned streets and storied villas of the newly liberated city. But her work is also a way to escape devastating truths about the family she left behind in Czechoslovakia and a future with her controlling American husband.

As the war drags on and the pressure intensifies, Niki begins to question the rules she’s been instructed to follow, and a colleague unexpectedly captures her heart. But one step out of line, one mistake, could mean life or death…

The German Wife by Kelly Rimmer

“Skillfully researched and powerfully written, The German Wife will capture you from the first page.” —Madeline Martin, New York Times bestselling author of The Last Bookshop in London

The New York Times bestselling author of The Warsaw Orphan returns with a gripping novel inspired by the true story of Operation Paperclip: a controversial secret US intelligence program that employed former Nazis after WWII.

Berlin, 1930—When a wave of change sweeps a radical political party to power, Sofie von Meyer Rhodes’s academic husband benefits from the ambitions of its newly elected chancellor. Although Sofie and Jürgen do not share the social views growing popular in Hitler’s Germany, Jürgen’s position with its burgeoning rocket program changes their diminishing fortunes for the better. But as Sofie watches helplessly, her beloved Berlin begins to transform, forcing her to consider what they must sacrifice morally for their young family’s security, and what the price for their neutrality will be.

Twenty years later, Jürgen is one of the many German scientists offered pardons for their part in the war, and taken to America to work for its fledgling space program. For Sofie, this is the chance to exorcise the ghosts that have followed her across the ocean, and make a fresh start in her adopted country. But her neighbors aren’t as welcoming or as understanding as she had hoped. When scandalous rumors about the Rhodes family’s affiliation with Hitler’s regime spreads, idle gossip turns to bitter rage, and the act of violence that results will tear apart Sofie’s community and her family before the truth is finally revealed.

“An unforgettable novel that explores important questions highly relevant to the world today.” —Christine Wells, author of Sisters of the Resistance