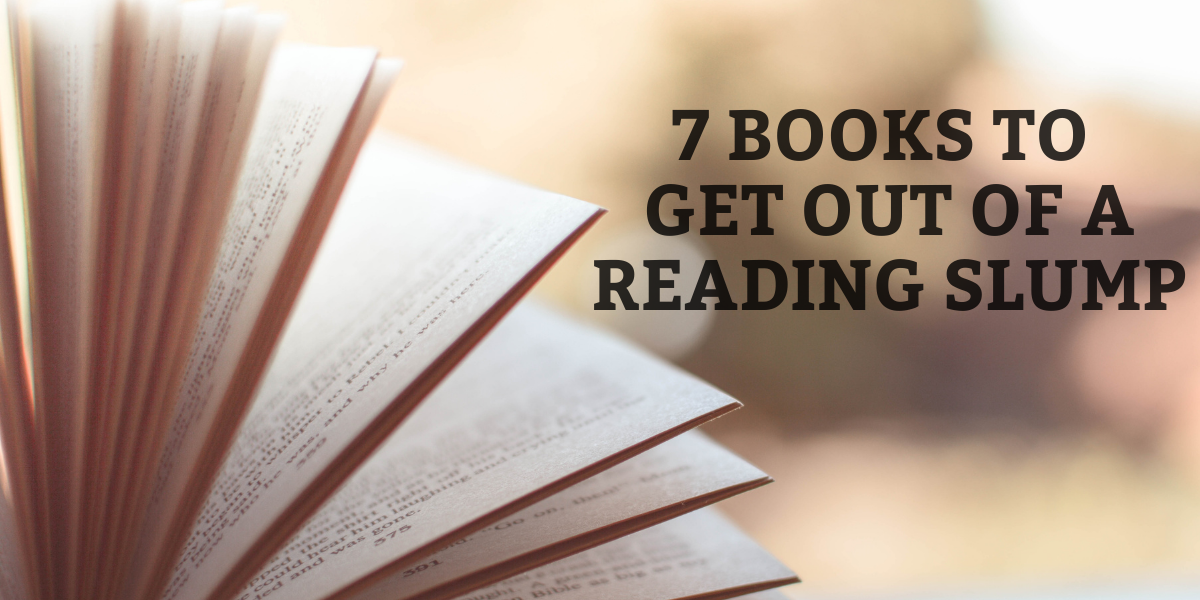 Are you in a reading slump? Don’t worry…we’ve been there and know how difficult it can be to get out of one. However, with the right sort of reads, you’ll be reaching for all the books on your bookshelf in no time! Our favorite books to get us back into reading are sometimes short, sometimes sweet, sometimes suspenseful, but above all, super engaging. Here’s just a few noteworthy recommendations.

One Summer in Paris by Sarah Morgan

USA TODAY bestselling author Sarah Morgan returns with this heartwarming novel about the power of friendship, love and what happens when an ending is just the beginning…

To celebrate their twenty-fifth wedding anniversary, Grace has planned the surprise of a lifetime for her husband—a romantic getaway to Paris. But she never expected he’d have a surprise of his own: he wants a divorce. Reeling from the shock but refusing to be broken, a devastated Grace makes the bold decision to go to Paris alone.

Audrey, a young woman from London, has left behind a heartache of her own when she arrives in Paris. A job in a bookshop is her ticket to freedom, but with no money and no knowledge of the French language, suddenly a summer spent wandering the cobbled streets alone seems much more likely…until she meets Grace, and everything changes.

Grace can’t believe how daring Audrey is. Audrey can’t believe how cautious newly single Grace is. Living in neighboring apartments above the bookshop, this unlikely pair offer each other just what they’ve both been missing. They came to Paris to find themselves, but finding this unbreakable friendship might be the best thing that’s ever happened to them…

How far would you go to find The One?

A simple DNA test is all it takes. Just a quick mouth swab and soon you’ll be matched with your perfect partner—the one you’re genetically made for.

That’s the promise made by Match Your DNA. A decade ago, the company announced that they had found the gene that pairs each of us with our soul mate. Since then, millions of people around the world have been matched. But the discovery has its downsides: test results have led to the breakup of countless relationships and upended the traditional ideas of dating, romance and love.

Now five very different people have received the notification that they’ve been “Matched.” They’re each about to meet their one true love. But “happily ever after” isn’t guaranteed for everyone. Because even soul mates have secrets. And some are more shocking than others…

A word-of-mouth hit in the United Kingdom, The One is a fascinating novel that shows how even the simplest discoveries can have complicated consequences.

The Road to Rose Bend by Naima Simone

If it was only about her, she might never have come back to Rose Bend.

But it’s not only about her anymore.

Sydney Collins left the small Berkshires town of Rose Bend eight years ago, grieving her sister’s death—and heartbroken over her parents’ rejection. But now the rebel is back—newly divorced and pregnant—ready to face her fears and make a home for her child in the caring community she once knew. The last thing she needs is trouble. But trouble just set her body on fire with one hot, hot smile.

Widower and Rose Bend mayor Coltrane Dennison hasn’t smiled in ages. Until a chance run-in with Sydney Collins, who’s all grown-up and making him want what he knows he can’t have. Grief is his only connection to the wife and son he lost, and he won’t give it up. Not for Sydney, not for her child, not for his heart. But when Sydney’s ex threatens to upend everything she’s rebuilt in Rose Bend, Cole and Sydney may find that a little trouble will take them where they never expected to go.

Book 1: The Road to Rose Bend

The Funny Thing About Norman Foreman by Julietta Henderson

A triumphant and touching debut about the unlikeliest superstar you’ll ever meet.

Twelve-year-old Norman Foreman and his best friend, Jax, are a legendary comedic duo in waiting, with a plan to take their act all the way to the Edinburgh Fringe. But when Jax dies, Norman decides the only fitting tribute is to perform at the festival himself. The problem is, Norman’s not the funny one. Jax was.

There’s also another, far more colossal objective on Norman’s new plan that his single mom, Sadie, wasn’t ready for: he wants to find the father he’s never known. Determined to put a smile back on her boy’s face, Sadie resolves to face up to her own messy past, get Norman to the Fringe and help track down a man whose identity is a mystery, even to her.

Julietta Henderson’s delightfully funny and tender debut takes us on a road trip with a mother and son who will live in the reader’s heart for a long time to come, and teaches us that—no matter the odds—we must always reach for the stars.

Share with us what book got you out of your last reading slump!