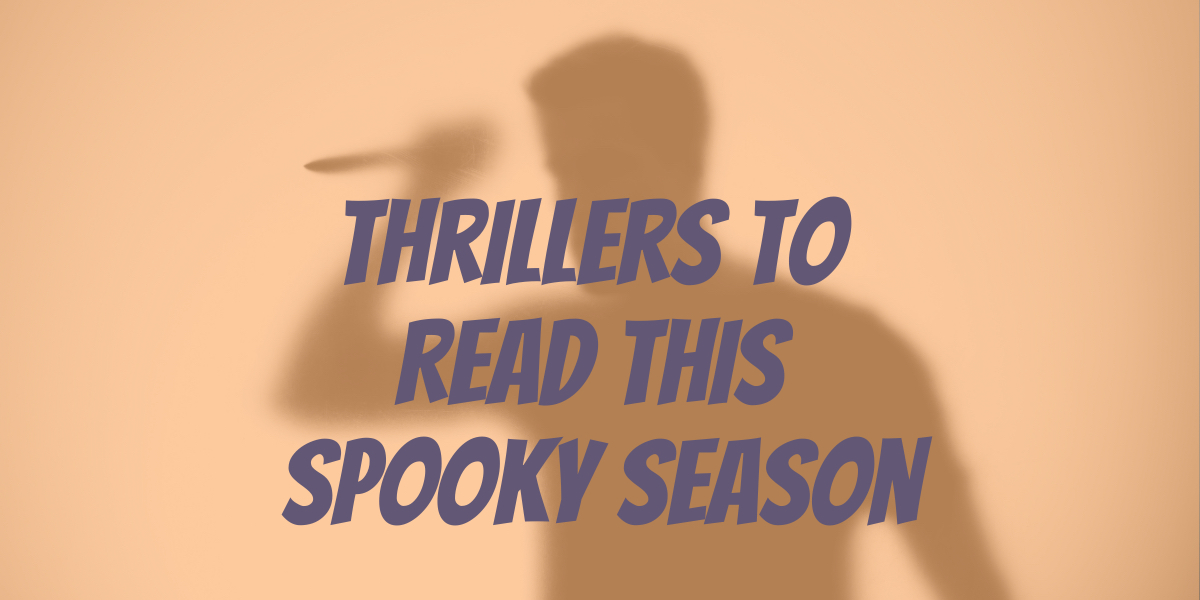 This is not a drill! Halloween is ten days away! I hope your October has been the spookiest this season has ever been, but if not, then I have some thrilling titles that will spook you into the Halloween mood! Here’s to only reading these titles by candlelight, keeping your safety pillow nearby, and always checking behind the shower curtain….you know, just in case.

People don’t just disappear without a trace…
Shelby Tebow is the first to go missing. Not long after, Meredith Dickey and her six-year-old daughter, Delilah, vanish just blocks away from where Shelby was last seen, striking fear into their once-peaceful community. Are these incidents connected? After an elusive search that yields more questions than answers, the case eventually goes cold.

Beth Murphy is on the run…

For nearly a year, Beth has been planning for her escape. She’s thought through everything — a new look, new name and new city — because one small slip and her husband will find her.

A couple hundred miles away, Jeffrey returns home from a work trip to find his wife, Sabine, is missing. Wherever she is, she’s taken almost nothing with her. Her abandoned car is the only evidence the police have, and all signs point to foul play.

As the police search for leads, the case becomes more and more convoluted. Sabine’s carefully laid plans for her future indicate trouble at home, and a husband who would be better off with her gone. But are things really as clear cut as they seem? Where is Sabine? And who is Beth? The only thing that’s certain is that someone is lying and the truth won’t stay buried for long.

“You won’t be able to stop turning the pages!” —Shari Lapena, New York Times bestselling author of The Couple Next Door

Think twice before you swipe.

Secrets, obsession and vengeance converge in this riveting thriller about an online dating match turned deadly cat-and-mouse game, from the New York Times bestselling author of Confessions on the 7:45

The Mother Next Door by Tara Laskowski

“If the women of Big Little Lies were the moms of East Coast high schoolers, they’d be right at home in The Mother Next Door—a witty, wicked thriller packed with hidden agendas, juicy secrets, and pitch-perfect satire of the suburban dream.”—Andrea Bartz, New York Times bestselling author of We Were Never Here

The annual Halloween block party is the pinnacle of the year on idyllic suburban cul-de-sac Ivy Woods Drive. An influential group of neighborhood moms—known as the Ivy Five—plans the event for months.

Except the Ivy Five has been four for a long time.

When a new mother moves to town, eager to fit in, the moms see it as an opportunity to make the group whole again. This year’s block party should be the best yet… until the women start receiving anonymous messages threatening to expose the quiet neighborhood’s dark past—and the lengths they’ve gone to hide it.

As secrets seep out and the threats intensify, the Ivy Five must sort the loyal from the disloyal, the good from the bad. They’ll do anything to protect their families. But when a twisted plot is revealed, with dangerous consequences, their steady foundation begins to crumble, leaving only one certainty: after this year’s block party, Ivy Woods Drive will never be the same.

From award-winning author Tara Laskowski, The Mother Next Door is an atmospheric novel of domestic suspense in which the strive for perfection ends in murder…

“Trust no one, absolutely no one while reading The Mother Next Door because everyone has secrets, all of them are liars, and everybody has at least one thing to lose. Tara Laskowski’s brilliantly paced tale of perfect-suburbia-until-you-scratch-the-surface is as compelling as it is twisted.”—Hannah Mary McKinnon, bestselling author of You Will Remember Me

Where I Left Her by Amber Garza

“In this high-tension domestic drama, nothing is as it seems. Don’t look away, you won’t want to miss a thing!” —J.T. Ellison, USA TODAY bestselling author of Her Dark Lies

From the author of When I Was You comes a spine-tingling new thriller about a mother’s worst nightmare come true, when her teenage daughter goes to a sleepover and doesn’t come back.

Whitney had some misgivings when she dropped her increasingly moody teenage daughter, Amelia, off at Lauren’s house. She’d never met the parents, and usually she’d go in, but Amelia clearly wasn’t going to let something so humiliating happen, so instead Whitney waved to her daughter before pulling away from the little house with the roses in front.

But when she goes back the next day, an elderly couple answers the door—Amelia and Lauren aren’t there, and this couple swears they never were, that she’s at the wrong house. As Whitney searches for Amelia, she uncovers a trail of lies her daughter has told her—from the Finsta account to rumors of a secret relationship. Does she really even know this girl she’s raised? And Amelia’s not the only one with secrets. Could Whitney’s own demons have something to do with her daughter’s disappearance, and can Whitney find her before it’s too late?

The Unknown by Heather Graham

Someone wants to watch the city burn…

Sienna Murray was only fourteen when she pulled her neighbors out of a raging house fire. A decade later, she still can’t explain what happened that night, how she knew to save them at just the right moment—or why she receives the same mysterious warning when it happens again…

New member of the Krewe of Hunters elite paranormal team Detective Ryder Stapleton doesn’t believe in coincidences. So when the suspicious fire he’s called to investigate reveals a cryptic link to Sienna, he can’t help but think the unassuming museum curator has something to hide. But he soon discovers they have more in common than he ever thought—and a growing attraction neither can deny.

If they’re going to have a future, Sienna and Ryder need to catch a serial arsonist roaming the shadowy streets of New Orleans…before the city burns down around them.

“A dark mystery, surprises and a cast of characters that will have you glued to the pages.” —Fresh Fiction on Seeing Darkness

The Mirror Man by Jane Gilmartin

“Great concept and brilliantly executed.”—John Marrs, international bestselling author of The One

Meet Jeremiah Adams. There are two of him.

The offer is too tempting: be part of a scientific breakthrough, step out of his life for a year, and be paid hugely for it. When ViMed Pharmaceutical asks Jeremiah to be part of an illegal cloning experiment, he sees it as a break from an existence he feels disconnected from. No one will know he’s been replaced—not the son who ignores him, not his increasingly distant wife—since a revolutionary drug called Meld can transfer his consciousness and memories to his copy.

From a luxurious apartment, he watches the clone navigate his day-to-day life. But soon Jeremiah discovers that examining himself from an outsider’s perspective isn’t what he thought it would be, and he watches in horror as “his” life spirals out of control. ViMed needs the experiment to succeed—they won’t call it off and are prepared to remove any obstacle. With his family in danger, Jeremiah needs to finally find the courage to face himself head-on.

Marion Lane and the Midnight Murder by T.A. Willberg

“This is the most fun I’ve had with a book this year. Every page is a delight and the mystery got its hooks into me from the first chapter.” – Stuart Turton, bestselling author of The 7½ Deaths of Evelyn Hardcastle

The letter was short. A name, a time, a place.

Marion Lane and the Midnight Murder plunges readers into the heart of London, to the secret tunnels that exist far beneath the city streets. There, a mysterious group of detectives recruited for Miss Brickett’s Investigations & Inquiries use their cunning and gadgets to solve crimes that have stumped Scotland Yard.

Late one night in April 1958, a filing assistant at Miss Brickett’s receives a letter of warning, detailing a name, a time, and a place. She goes to investigate but finds the room empty. At the stroke of midnight, she is murdered by a killer she can’t see—her death the only sign she wasn’t alone. It becomes chillingly clear that the person responsible must also work for Miss Brickett’s, making everyone a suspect.

Marion Lane, a first-year Inquirer-in-training, finds herself drawn ever deeper into the investigation. When her friend and colleague is framed for the crime, to clear his name she must sort through the hidden alliances at Miss Brickett’s and secrets dating back to WWII. Masterful, clever and deliciously suspenseful, Marion Lane and the Midnight Murder is a fresh take on the Agatha Christie-style locked-room murder mystery, with an exciting new heroine detective.

9 titles not enough for you? Head on over to our Spooky Reads store for more!

Did you hear that? You locked the front door…right? Tell us your spookiest story in the comments!