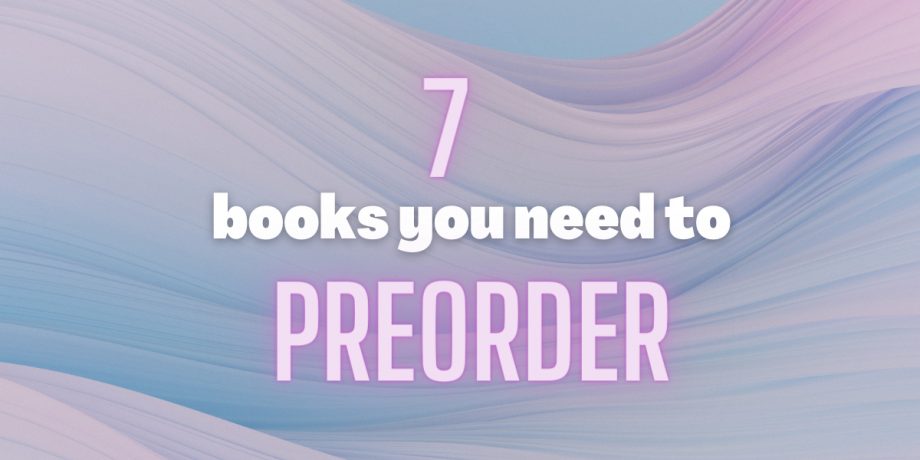 Does your TBR need a little refresh? Do you love the anticipation of an incoming purchase delivery? Well, you’ve come to the right place! We have 7 highly-anticipated books that you need to pre-order, like now! From thrillers to books that make you cry, this list has them all. We think you deserve to treat yourself, so enjoy and happy reading!

Three couples rent a luxury cabin in the woods for a weekend getaway to die for in this chilling locked-room thriller by New York Times bestselling author Lisa Unger.

What could be more restful, more restorative, than a weekend getaway with family and friends? An isolated luxury cabin in the woods, complete with spectacular views, a hot tub and a personal chef. Hannah’s loving and generous tech-mogul brother found the listing online. The reviews are stellar. It’s his birthday gift to Hannah and includes their spouses and another couple. The six friends need this trip with good food, good company and lots of R & R, far from the chatter and pressures of modern life.

But the dreamy weekend is about to turn into a nightmare. A deadly storm is brewing. The rental host seems just a little too present. The personal chef reveals that their beautiful house has a spine-tingling history. And the friends have their own complicated past, with secrets that run blood deep. How well does Hannah know her brother, her own husband? Can she trust her best friend? And who is the new boyfriend, crashing their party? Meanwhile, someone is determined to ruin the weekend, looking to exact a payback for deeds long buried. Who is the stranger among them?

Daughters of the New Year by E.M. Tran

A captivating debut novel that moves backwards in time to trace five generations of Vietnamese mothers and daughters, drawing on Vietnamese zodiac astrology to chart the fateful events of their lives

What does the future hold for those born in the years of the Dragon, Tiger, and Goat?

In present day New Orleans, Xuan Trung, former beauty queen turned refugee after the Fall of Saigon, is obsessed with divining her daughters’ fates through their Vietnamese zodiac signs. But Trac, Nhi and Trieu diverge completely from their immigrant parents’ expectations. Successful lawyer Trac hides her sexuality from her family; Nhi competes as the only woman of color on a Bachelor-esque reality TV show; and Trieu, a budding writer, is determined to learn more about her familial and cultural past.

As the three sisters begin to encounter strange glimpses of long-buried secrets from the ancestors they never knew, the story of the Trung women unfurls to reveal the dramatic events that brought them to America. Moving backwards in time, E.M. Tran takes us into the high school classrooms of New Orleans, to Saigon beauty pageants, to twentieth century rubber plantations, traversing a century as the Trungs are both estranged and united by the ghosts of their tumultuous history.

A “haunted story of resilience and survival” (Meng Jin, Little Gods), Daughters of the New Year is an addictive, high-wire act of storytelling that illuminates an entire lineage of extraordinary women fighting to reclaim the power they’ve been stripped of for centuries.

The perfect romcom for dog lovers! Pets of Park Avenue is the story of a self-confessed hot mess who learns that life is more fun when things don’t go according to plan.

What do you do when The One is also the one who broke your heart?

Self-proclaimed hot mess Scout Myers is determined to prove she’s finally got her act together. Raised by grandparents who saw her as her wayward mother’s wayward daughter, Scout’s used to being written off. So when the opportunity for a promotion arises at Paws in the City, the talent agency where she works, Scout is desperate to rise to the occasion. With shared custody of her little sister also on the line, Scout can’t afford a single mistake…like suddenly needing a canine stand-in for an important photoshoot. Luckily (or not) she knows the owner of the perfect pup replacement: the estranged husband she walked out on years ago.

On the surface, it appears Lane Halliday’s life has been blissfully drama free without Scout, but she suspects her handsome-as-ever not-quite-ex-husband doth protest too much. Working together even feels like old times—except for all that lingering, unresolved tension. But Scout’s not sure she’s ready to confront the reasons she left Lane, and when she discovers his plans to finalize their divorce, everything suddenly feels very real, leaving Scout to wonder whether true love might be worth a little hot mess.

A stunning and witty debut novel about a young woman’s emotional journey through unimaginable loss, pulled along by her tight-knit Nigerian family, a posse of new friends, and the love and laughter she shared with her husband. Onyi Nwabineli is a fresh new voice for fans of Yaa Gyasi, Queenie and I May Destroy You.

Here are three things you should know about my husband:

And here is one thing you should know about me:

Bonus fact: No. I am not okay.

A Mother Would Know by Amber Garza

A woman questions everything she knows about her son when a local woman is found dead.

Valerie has been forgetting things. Her daughter worries about her being on her own in her big Victorian house—one rumored to be haunted after a tragedy decades earlier—and truth be told, she is a little lonely. With few options, she asks her adult son to move home, but it’s not quite the reunion she hoped for. Hudson is taciturn, moody and frequently gone.

The neighbors already hold a grudge against Hudson, and they aren’t happy about his return. When a young woman is found murdered a block away, suspicion falls on him immediately, without a shred of evidence. While Valerie fights to defend her son, she begins to wonder who she really invited into her home.

It’s a horrible thing for a mother to even think…but is it possible she’s enabled a monster? A monster she is living with, alone?

When We Were Friends by Holly Bourne

In this darkly funny novel, two women reunite after a decade of estrangement, only to confront the forces that destroyed their friendship in the first place.

From the day they first meet as teenagers, Fern and Jessica are best friends. Despite their differences, they are there for each other throughout everything, navigating the difficulties of growing up and fitting in. That is, until Jessica crosses a line that Fern can’t forgive.

A lot has changed for them both—but can their relationship be different now that they are older? Is it possible for either of them to rewrite the roles they’ve been cast in? Or will their shared history ultimately be doomed to repeat itself again?

Set between the present day and the early ’00s, When We Were Friends is a blisteringly funny and devastating novel: both a joyful celebration of female friendship and a razor-sharp look at the damage we can all cause to those we claim to love the most.

Before Your Memory Fades by Toshikazu Kawaguchi

The latest novel in the international bestselling Before the Coffee Gets Cold Series, following four new customers in a little Tokyo café where customers can travel back in time.

In a small back alley in Tokyo, there is a café that has been serving carefully brewed coffee for more than one hundred years. But this coffee shop offers its customers a unique experience: the chance to travel back in time.

From the author of Before the Coffee Gets Cold and Tales from the Cafe comes another story of four new customers, each of whom is hoping to take advantage of Café Funiculi Funicula’s time-traveling offer. Along with some familiar faces from Kawaguchi’s previous novels, readers will also be introduced to a daughter, a comedian, a sister and a lover, each with something they wish they had said differently.

With his signature heartwarming characters and immersive storytelling, Kawaguchi once again invites the reader to ask themselves: what would you change if you could travel back in time?

Okay, be honest, how many packages are you now waiting on? Don’t worry, we don’t judge.