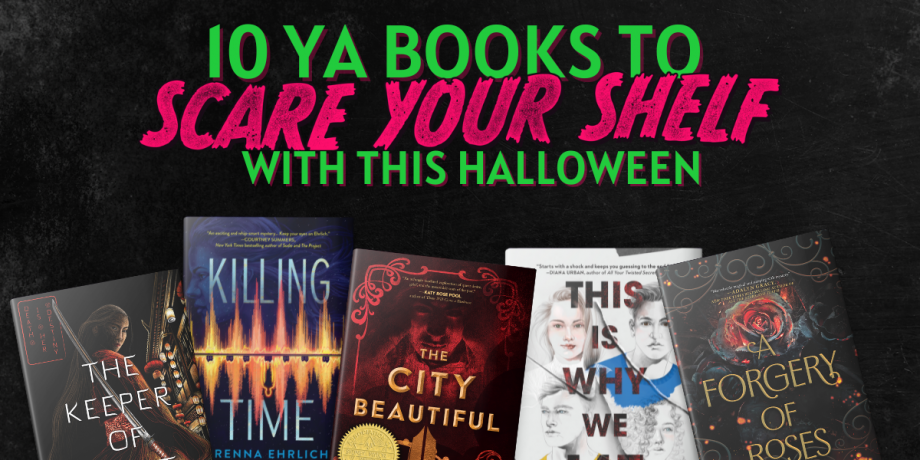 Looking for some good books to scare your shelf with this Halloween season? We have you covered with these 10 spooky YA reads that range from gothic historical fantasies to Yokai demons, to fantastic whodunnits. Some may even have you leaving the light on long after you’ve finished reading them.

“Chillingly sinister, warmly familiar, and breathtakingly transportive, The City Beautiful is the haunting, queer Jewish historical thriller of my darkest dreams.”—Dahlia Adler, creator of LGBTQreads and editor of That Way Madness Lies

Death lurks around every corner in this unforgettable Jewish LGBTQ+ historical fantasy about a city, a boy, and the shadows of the past that bind them both together.

“Women accused of witchcraft. Fearsome girls with arcane knowledge. Toil & Trouble features fifteen stories of girls embracing their power, reclaiming their destinies, and using their magic to create, to curse, to cure, to kill…and to live.”

Can you tell Aden Polydoros is a great author to read during All Hallows Eve? From the author of The City Beautiful comes a haunting fantasy following Toma, adopted daughter of the benevolent undead, making her way across a civil war-torn continent to save her younger sister as she discovers she might possess magical powers herself.

This is Why We Lie

When Jenna Dallas and Adam Cole find Colleen O’Dell’s body floating off the shore of their coastal town, the community of Gardiners Bay is shaken. But even more shocking is the fact that her drowning was no accident. This whodunnit will leave you guessing until the very end.

A thrilling novel about a secret society and the dangers that lie in wait for anyone brave enough to join—perfect for fans of Karen M. McManus, Kara Thomas, and Maureen Johnson.

A Forgery of Roses

Myra has a gift many would kidnap, blackmail, and worse to control: she’s a portrait artist whose paintings alter people’s bodies. Guarding that secret is the only way to keep her younger sister safe now that their parents are gone. But one frigid night, the governor’s wife discovers the truth and threatens to expose Myra if she does not complete a special portrait that would resurrect the governor’s dead son.

Natalie Temple, who’s never been one for beaches or parties in the first place, is reeling from the murder of her favorite teacher, and there’s no way this true-crime-obsessed girl is going to sit back and let the rumor mill churn out lie after lie—even if she has to hide her investigation from her disapproving mom and team up with the new boy in town…

Lies My Memory Told Me

From the thrilling voice of Sacha Wunsch comes a heart-stopping psychological mystery in a world where memories can be shared—and one girl can’t trust any of them.

The Disappearance of Sloane Sullivan

No one wants me to tell you about the disappearance of Sloane Sullivan. Not the lawyers or the cops. Not her friends or family. Not even the boy who loved her more than anyone. And most certainly not the United States Marshals Service. You know, the people who run the witness protection program or, as it’s officially called, the Witness Security Program? Yeah, the WITSEC folks definitely don’t want me talking to you.

But I don’t care. I have to tell someone.