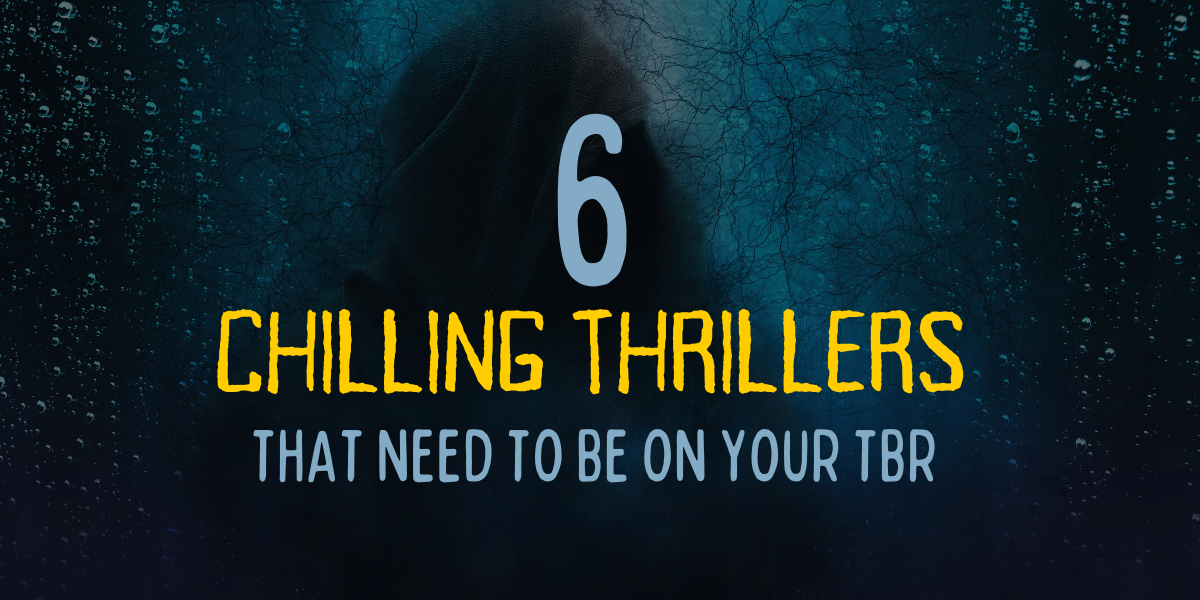 Calling all thrill-seekers! Sometimes life itself is frightening, so why not escape into a fictional world that’s a lot scarier! These 6 thrillers still have us reeling and we need to discuss with someone. So run to your nearest bookstore so we can chat in the comments below!

Lucas Forester didn’t hate his wife. Michelle was brilliant, sophisticated and beautiful. Sure, she had extravagant spending habits, that petty attitude, a total disregard for anyone below her status. But she also had a lot to offer. Most notably: wealth that only the one percent could comprehend.

For years, Lucas has been honing a flawless plan to inherit Michelle’s fortune. Unfortunately, it involves taking a hit out on her.

Every track is covered, no trace left behind, and now Lucas plays the grieving husband so well he deserves an award. But when a shocking photo and cryptic note show up on his doorstep, Lucas goes from hunter to prey.

Someone is on to him. And they’re closing in.

Told with dark wit and a sharply feminist sensibility, Never Coming Home is a terrifying tale of duplicity that will have you side-eyeing your spouse as you dash to the breathtaking end.

Out Of Her Depth by Lizzy Barber

There are summers that will change your life.

There are summers that may end it.

In the lush green hills beyond Florence sits the Villa Medici—a graceful pensione surrounded by manicured gardens. Rachel, a college student from an unfashionable London suburb, can’t believe her luck in landing a summer job here. Especially when she’s drawn into a circle of privileged young sophisticates, including her glamorous coworker Diana, who promises to help Rachel win the affections of handsome, confident Sebastian.

But as champagne flows and rivalries fester in the Tuscan countryside, Rachel realizes that Diana has motivations of her own. Adrift in a world of backstabbing and bed-hopping, lavish parties and easy betrayal, Rachel feels the stakes rising along with the temperature until, one night, something snaps. Someone dies. And nothing will ever be the same…

In this atmospheric thriller set in sun-drenched Tuscany, Lizzy Barber weaves a deadly web of manipulation and desire that will keep readers enthralled until the breathtaking last page.

On A Quiet Street by Seraphina Nova Glass

The perfect neighborhood can be the perfect place to hide…

Who wouldn’t want to live in Brighton Hills? This exclusive community on the Oregon coast is the perfect mix of luxury and natural beauty. Stunning houses nestle beneath mighty Douglas firs, and lush backyards roll down to the lakefront. It’s the kind of place where neighbors look out for one another. Sometimes a little too closely…

Cora thinks her husband, Finn, is cheating—she just needs to catch him in the act. That’s where Paige comes in. Paige lost her son to a hit-and-run last year, and she’s drowning in the kind of grief that makes people do reckless things like spying on the locals, searching for proof that her son’s death was no accident…and agreeing to Cora’s plan to reveal what kind of man Finn really is. All the while, their reclusive new neighbor, Georgia, is acting more strangely every day. But what could such a lovely young mother possibly be hiding?

Sound Of Darkness by Heather Graham

The cries of the dead are deafening

Women are being taken in Virginia, and FBI agent Mark Gallagher is determined to put a stop to it. Certain he’s closing in on the killer known as The Embracer, Mark is less than thrilled when he’s partnered with rookie agent Colleen Law, worried she’s a liability when there’s so much at stake.

But like everyone in the Krewe of Hunters, Colleen has talents that extend beyond the usual investigative toolbox. She can hear the voices of the victims in her head, and they’re telling her she and Mark are near to uncovering the truth.

When Mark’s prime suspect takes a liking to Colleen, he’s surprisingly protective of his new partner, even as he admits her connection to the victims is key. But tense interrogations turn dangerously personal when someone close to Colleen goes missing, luring the agents deep into the shadows of wooded rural Virginia, where nobody can hear them scream.

When Adam Ramsdell pulls Elle’s half-frozen body from the surf on a lonely California beach, she has no memory of what her full name is and how she got those bruises ringing her throat.

Elle finds refuge in Adam’s home on the edge of Gothic, a remote village located between the steep lonely mountains and the raging Pacific Ocean. As flashes of her memory return, Elle faces a terrible truth—buried in her mind lurks a secret so dark it could get her killed.

Everyone in Gothic seems to hide a dark past. Even Adam knows more than he will admit. Until Elle can unravel the truth, she doesn’t know who to trust, when to run and who else might be hurt when the killer who stalks her nightmares appears to finish what he started…

Scared yet? I know our shelf integrity is…but our TBR just got a lot happier!