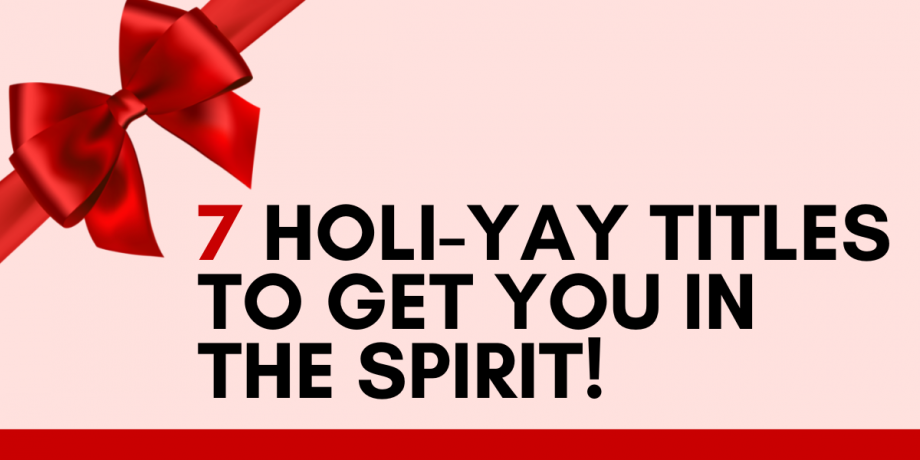 Before you mutiny, hear us out! We know it’s not even Thanksgiving yet, but can you really have too much Holiday spirit? We say no! We can’t be the only ones that feel instantly cozy thinking about holiday songs, crackling fires, and the silence of night as the snow blissfully falls. See, you’re already calmer 😉. So, enjoy scrolling through a handful of our absolute favs this year and get your TBR holiday ready!

All Is Bright by RaeAnne Thayne

Sage McKnight is an ambitious young architect working at her father’s firm who takes on her most challenging client in Mason Tucker. The former pro baseball player is still healing from the physical and emotional scars after a plane crash left him a wheelchair-using single dad, and he’s determined not to let anyone breach his emotional defenses. Sage knows her work on Mason’s new home in Hope’s Crossing is her best work yet, and she won’t let her grumpy client prevent her from showcasing her work personally.

With Sage’s gift for taking broken things and making them better, the matchmaking talent of the quirky locals and a generous sprinkling of Christmas cheer, Mason doesn’t stand a chance against the power of this magical holiday season.

Until Camryn Neff can return to her “real” life in Chicago, she’s in Wishing Tree to care for her twin sisters. She’s not looking for forever love, not here. But handsome hotelier Jake Crane is a temptation she can’t resist, so she suggests they pair up for the season. No golden rings, no broken hearts. At his side, she sees her hometown through Christmas-colored eyes. The cheer is cheerier, the joy more joyful. She thought she had put her future on hold…but maybe her real life was here all along, waiting for her to come home.

New in town, River Best is charmed by Wishing Tree’s homespun traditions and warmhearted people. When she’s crowned Snow Queen, she’s honored but wary. Dylan Tucker, her king, seems like the stuff of sugarplum dreams, but she can’t shake the feeling that he’s hiding something big. As they perform their “royal” duties—tasting cookies, lighting trees—Dylan’s good humor and melty kisses draw her to the brink of love. But she can’t let herself fall until she uncovers his secret, even if her lack of faith means losing him forever.

The Road to Christmas by Sheila Roberts

From USA TODAY bestselling author Sheila Roberts, three generations of travelers embark on a Christmas road trip filled with humor and heart, set against the snowy mountains of Washington State.

Michelle and Max are not planning on a happy holiday. Their marriage is in shambles and the D word has entered their vocabulary. But now their youngest daughter, Julia, wants everyone to come to her new house in Idaho for Christmas, and she’s got the guest room all ready for Mom and Dad. Oh, joy.

Their other daughters, Audrey and Shyla, are driving up from California and hoping to meet a sexy rancher for Audrey along the way. What they don’t plan on is getting stranded on a ranch when the car breaks down.

The ones with the shortest drive are Grandma and Grandpa—also known as Hazel and Warren. It’s still a bit of a trek, and Hazel doesn’t like the idea of driving all that way in snow, but Warren knows they’ll have no problem. They have a reliable car—and snow tires and chains if they need them. They’ll be fine.

Surprises lie in store for all three sets of intrepid travelers as they set out on three very different adventures, all leading to one memorable family Christmas.

Snowed in for Christmas by Sarah Morgan

What happens if the only Christmas celebration you want to attend is one you haven’t been invited to? USA Today bestselling author Sarah Morgan delights with this hilarious and heartwarming Christmas cracker of a novel!

This Christmas the Miller siblings have one goal—to avoid their well-meaning family’s endless stream of prying questions. Ross, Alice and Clemmie have secrets that they don’t intend to share, and they are relying on each other to deflect attention.

Lucy Clarke is facing a Christmas alone and the prospect of losing her job. Unless she can win a major piece of business from Ross Miller, the season promises to be anything but festive. She’ll just deliver her proposal to his family home and then leave. After all, she wouldn’t want to intrude on the Miller family’s perfect Christmas.

A Christmas to remember

When Lucy appears on the Miller family’s snow-covered Highland doorstep, she’s mistaken for Ross’s girlfriend. By the time the confusion is cleared up, they’re snowed in—she can’t leave, even if she wants to! But does she want to? As secrets spill out like presents from an overstuffed stocking and the chemistry between her and Ross ignites, this is going to be either Lucy’s worst Christmas ever or the best mistake of her life.

A Wish For Winter by Viola Shipman

With echoes of classic Hollywood love stories like Serendipity and An Affair to Remember, Viola Shipman’s latest winter charmer following the USA TODAY bestseller The Secret of Snow is sure to tug on heartstrings and delight readers who love books about books, missed connections and the magic of Christmas.

Despite losing her parents in a tragic accident just before her fourteenth Christmas, Susan Norcross has had it better than most, with loving grandparents to raise her and a gang of quirky, devoted friends to support her. Now a successful bookstore owner in a tight-knit Michigan lakeside community, Susan is facing down forty—the same age as her mother when she died—and she can’t help but see everything she hasn’t achieved, including finding a love match of her own. To add to the pressure, everyone in her small town believes it’s Susan’s destiny to meet and marry a man dressed as Santa, just like her mother and grandmother before her. So it seems cosmically unfair that the man she makes an instant connection with at an annual Santa Run is lost in the crowd before she can get his name.

What follows is Susan and her friends’ hilarious and heartwarming search for the mystery Santa—covering twelve months of social media snafus, authors behaving badly and dating fails—as well as a poignant look at family, friendship and what defines a well-lived and well-loved life.

The Secret of Snow by Viola Shipman