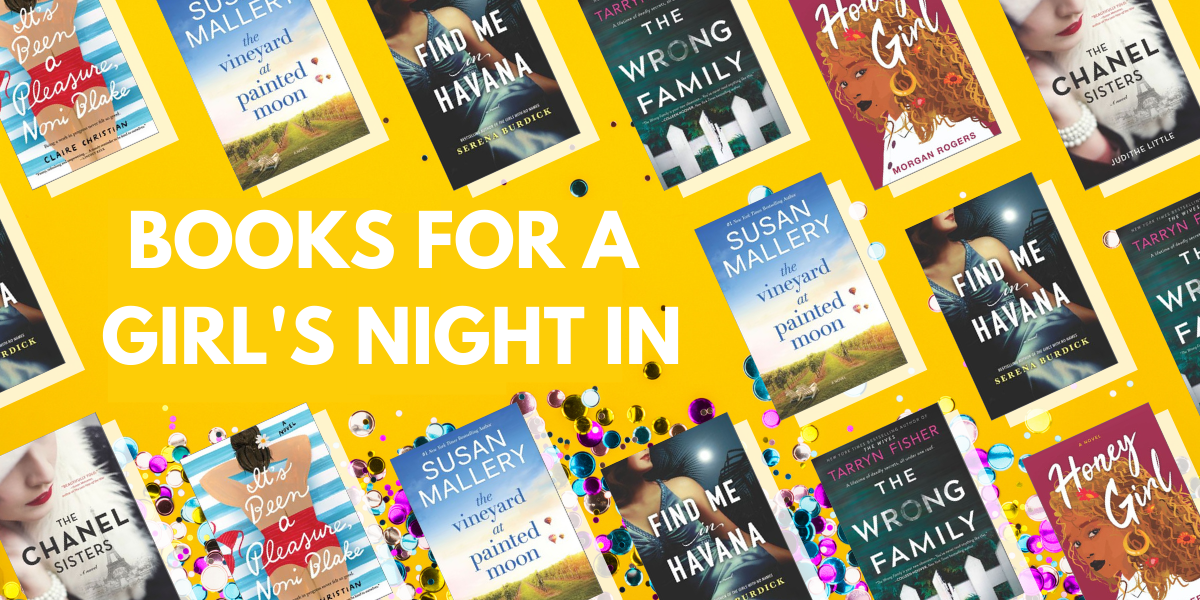 In desperate need of some girl time? Grab your friends (Zoom counts!), some wine, and a couple of books for a cozy night in together. Carve out some much-needed time for these 3 R’s: rest, relaxation and reconnection. Speaking of R’s… if you need a few recommendations, these 9 books are the ones we can’t stop talking about with each other!

HONEY GIRL is an emotional, heartfelt, charming debut, and I loved every moment of it.”— Jasmine Guillory, New York Times bestselling author of The Proposal

The Chanel Sisters by Judithe Little

Find Me in Havana by Serena Burdick

A novel based on the dazzling story of one of Hollywood’s most celebrated Hispanic actresses and her daughter’s search for closure.

Cuba, 1936: When Estelita Rodriguez sings in a hazy Havana nightclub for the very first time, she is nine years old. From then on, that spotlight of adoration—from Havana to New York’s Copacabana and then Hollywood—becomes the one true accomplishment no one can take from her. Not the 1933 Cuban Revolution that drove her family into poverty. Not the revolving door of husbands or the fickle world of film.

Thirty years later, her young adult daughter, Nina, is blindsided by her mother’s mysterious death. Seeking answers, the grieving Nina navigates the troubling, opulent memories of their life together and discovers how much Estelita sacrificed to live the American dream on her own terms.

Based on true events and exclusive interviews with Nina Lopez, Estelita’s daughter, Find Me in Havana weaves two unforgettable voices into one extraordinary story that explores the unbreakable bond between mother and child, and the ever-changing landscape of self-discovery.

The Secrets of Love Story Bridge by Phaedra Patrick

From the bestselling author of The Curious Charms of Arthur Pepper comes a heartwarming novel of a cynical single father who discovers new beginnings in the unlikeliest places.

Mitchell Fisher has said a firm goodbye to romance. He relishes his job cutting off the padlocks that couples fasten to his hometown’s famous “love story” bridge. Only his young daughter, Poppy, knows that behind his prickly veneer, Mitchell is deeply lonely—and he still grieves the loss of Poppy’s mother.

Then one hot summer’s day, everything changes when Mitchell bravely rescues a woman who falls from the bridge into the river. He’s surprised to feel an unexpected connection to her, but then she disappears. Desperate to find the mysterious woman, Mitchell teams up with her spirited sister Liza to see if she’s left any clues behind. There’s just one—a secret message on the padlock she left on love story bridge…

What books do you like reading with your girlfriends? Let us know in the comments below!

2 thoughts on “9 Books for a Cozy Girls’ Night In”