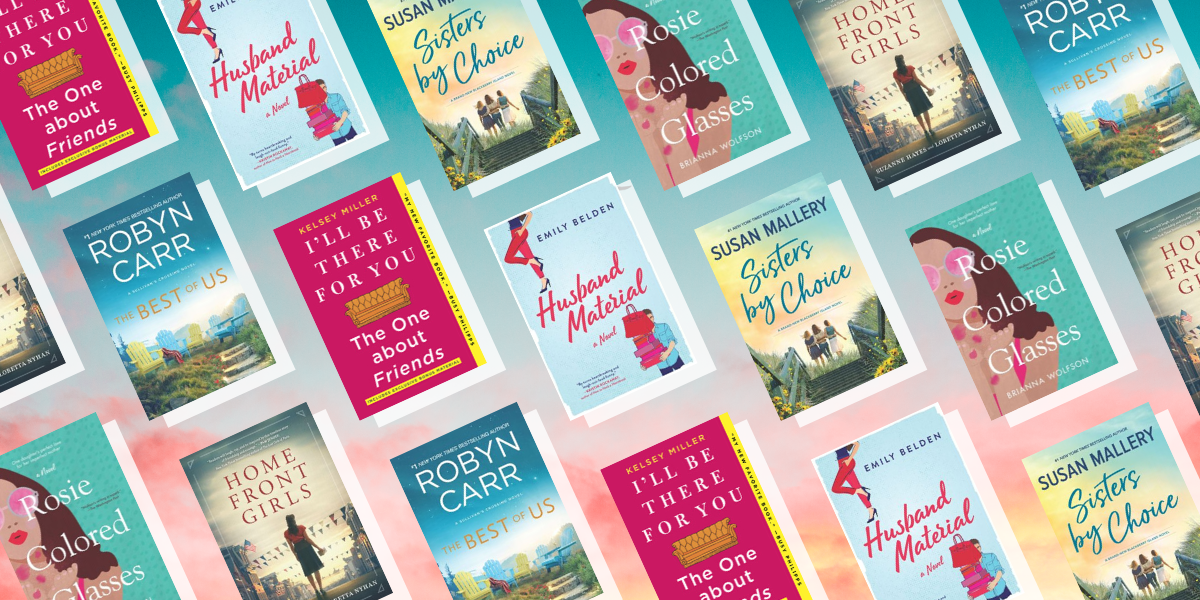 Happy Galentine’s Day! If you haven’t been celebrating the holiday made famous by Leslie Knope from Parks and Recreation, you’re missing out big time. It’s a day for ladies celebrating ladies and one of our favorite ways to do that is kicking back with a good book and our girlfriends. If that sounds like your kind of party, read on for some recommendations!

Sisters by Choice by Susan Mallery

From the New York Times bestselling author of California Girls comes an all new original Blackberry Island novel told with Susan Mallery’s trademark humor and charm. Sisters by Choice is a heartfelt tale of love, family and the friendships that see us through.

Cousins by chance, sisters by choice…

After her cat toy empire goes up in flames, Sophie Lane returns to Blackberry Island, determined to rebuild. Until small-town life reveals a big problem: she can’t grow unless she learns to let go. If Sophie relaxes her grip even a little, she might lose everything. Or she might finally be free to reach for the happiness and love that have eluded her for so long.

Kristine has become defined by her relationship to others. She’s a wife, a mom. As much as she adores her husband and sons, she wants something for herself—a sweet little bakery just off the waterfront. She knew changing the rules wouldn’t be easy, but she never imagined she might have to choose between her marriage and her dreams.

Like the mainland on the horizon, Heather’s goals seem beyond her grasp. Every time she manages to save for college, her mother has another crisis. Can she break free, or will she be trapped in this tiny life forever?

The Best of Us by Robyn Carr

Life’s best surprises happen in the most unexpected places…

Dr. Leigh Culver loves practicing medicine in Timberlake, Colorado, after her stressful life in Chicago. The only drawback is she misses her aunt Helen, the woman who raised her.

When Helen visits Leigh, she is surprised to find her niece still needs her, especially when it comes to sorting out her love life. But the biggest surprise comes when Leigh takes Helen out to Sullivan’s Crossing and Helen finds herself falling for the place and one special person. Helen and Leigh will each have to decide if they can open themselves up to love neither expected to find and seize the opportunity to live their best lives.

The McAvoy Sisters Book of Secrets by Molly Fader

What drove their family apart just might bring them back together…

It’s been seventeen years since the tragic summer the McAvoy sisters fell apart. Lindy, the wild one, left home, carved out a new life in the city and never looked back. Delia, the sister who stayed, became a mother herself, raising her daughters and running the family shop in their small Ohio hometown on the shores of Lake Erie.

But now, with their mother’s ailing health and a rebellious teenager to rein in, Delia has no choice but to welcome Lindy home. As the two sisters try to put their family back in order, they finally have the chance to reclaim what’s been lost over the years: for Delia, professional dreams and a happy marriage, and for Lindy, a sense of home and an old flame—and best of all, each other. But when one turbulent night leads to a shocking revelation, the women must face the past they’ve avoided for a decade. And there’s nothing like an old secret to bring the McAvoy women back together and stronger than ever.

I’ll Be There for You by Kelsey Miller

SIX FRIENDS THAT BECAME A FAMILY.

A TELEVISION SHOW THAT BECAME A PHENOMENON.

I’ll Be There for You is a deep dive into Friends history and lore, exploring all aspects of the show, from its unlikely origins to the societal conditions that amplified its success. Journalist and pop culture expert Kelsey Miller relives the show’s most powerful moments, sheds light on its sometimes dated and problematic elements, and examines the worldwide trends that Friends catalyzed, from contemporary coffee culture to the wildly popular ’90s haircut The Rachel. Taking readers behind the scenes, Miller traces the cast’s rise to fame and untangles the complex relationship between the actors and their characters. Weaving in revelatory interviews and personal stories, she investigates the role of celebrity media, world-changing events and the dawning of the digital age—all of which influenced both the series and its viewers.

I’ll Be There for You is the definitive retrospective of Friends, not only for fans of the series, but for anyone who’s ever wondered what it is about this show—and television comedy—that resonates so powerfully.

The Lost Girls of Paris by Pam Jenoff

From the author of the runaway bestseller The Orphan’s Tale comes a remarkable story of friendship and courage centered around three women and a ring of female secret agents during World War II.

One morning while passing through Grand Central Terminal on her way to work, Grace Healey finds an abandoned suitcase tucked beneath a bench. Unable to resist her own curiosity, Grace opens the suitcase, where she discovers a dozen photographs—each of a different woman. In a moment of impulse, Grace takes the photographs and quickly leaves the station.

Grace soon learns that the suitcase belonged to a woman named Eleanor Trigg, leader of a network of female secret agents who were deployed out of London during the war. Twelve of these women were sent to Occupied Europe as couriers and radio operators to aid the resistance, but they never returned home, their fates a mystery. Setting out to learn the truth behind the women in the photographs, Grace finds herself drawn to a young mother turned agent named Marie, whose daring mission overseas reveals a remarkable story of friendship, valor and betrayal.

Vividly rendered and inspired by true events, New York Times bestselling author Pam Jenoff shines a light on the incredible heroics of the brave women of the war and weaves a mesmerizing tale of courage, sisterhood and the great strength of women to survive in the hardest of circumstances.

Twenty-nine-year-old Charlotte Rosen has a secret: she’s a widow. Ever since the fateful day that leveled her world, Charlotte has worked hard to move forward. Great job at a hot social media analytics company? Check. Roommate with no knowledge of her past? Check. Adorable dog? Check. All the while, she’s faithfully data-crunched her way through life, calculating the probability of risk—so she can avoid it.

Yet Charlotte’s algorithms could never have predicted that her late husband’s ashes would land squarely on her doorstep five years later. Stunned but determined, Charlotte sets out to find meaning in this sudden twist of fate, even if that includes facing her perfectly coiffed, and perfectly difficult, ex-mother-in-law—and her husband’s best friend, who seems to become a fixture at her side whether she likes it or not.

But when her quest reveals a shocking secret, Charlotte is forced to answer questions she never knew to ask and to consider the possibility of forgiveness. And when a chance at a new life arises, she’ll have to decide once and for all whether to follow the numbers or trust her heart.

Opposites attract, until the magic gives way to misunderstanding. That is the story of the Thorpe family. Rex, practical, is a rule keeper. Rosie, sparkling and unconventional, lives to break the rules. When Rex and Rosie divorce, their daughter, Willow, must navigate their opposing worldviews as she shuffles between them.

But Willow just wants to be with fun-loving Rosie, to bask in her mother’s enchanting glow, the parent who lets her stay up late, miss school, eat candy for breakfast. Rosie’s seemingly outsized love fills a void within Willow. But as her mother’s behavior becomes erratic, her father must step in to shield Willow. Blinded by Rosie’s brilliance, Willow resents Rex’s interference, unable to recognize his kind of love.

Rex has removed his Rosie colored glasses. Now Willow struggles to do the same without diminishing her deep love for her mother.

In turns heartbreaking and uplifting, this novel is about the many ways that love and family, however imperfect, can redeem you.

Loneliness is built into the fabric of this war, isn’t it? I say a little prayer before I stick my hand in the mailbox. The “Rockport, Massachusetts” stamp on the front of an envelope means the clouds will part, revealing a brilliant sun….

It’s January 1943 when Rita Vincenzo receives her first letter from Glory Whitehall. Glory is an effervescent young mother from New England, impulsive and free as a bird. Rita is a Midwestern professor’s wife with a love of gardening and a generous, old soul. These two women have nothing in common except one powerful bond: the men they love are fighting in a war a world away from home.

Brought together by an unlikely twist of fate, Glory and Rita begin a remarkable correspondence. The friendship forged by their letters allows them to survive the loneliness and uncertainty of waiting on the home front, and gives them the courage to face the battles raging in their very own backyards. Connected across the country by the lifeline of the written word, each woman finds her life profoundly altered by the other’s unwavering support.

Filled with unforgettable characters and unbridled charm, Home Front Girls is a timeless celebration of the strength and solidarity of women. It is a luminous reminder that even in the darkest of times, true friendship will carry us through.

J.T. Ellison’s pulse-pounding new psychological thriller examines the tenuous bonds of friendship, the power of lies and the desperate lengths people will go to in order to protect their secrets.

In a world where appearances are everything, as long as students pretend to follow the rules, no one questions the cruelties of the secret societies or the dubious behavior of the privileged young women who expect to get away with murder.

What’s your favorite way to celebrate Galentine’s Day? Let us know in the comments below.