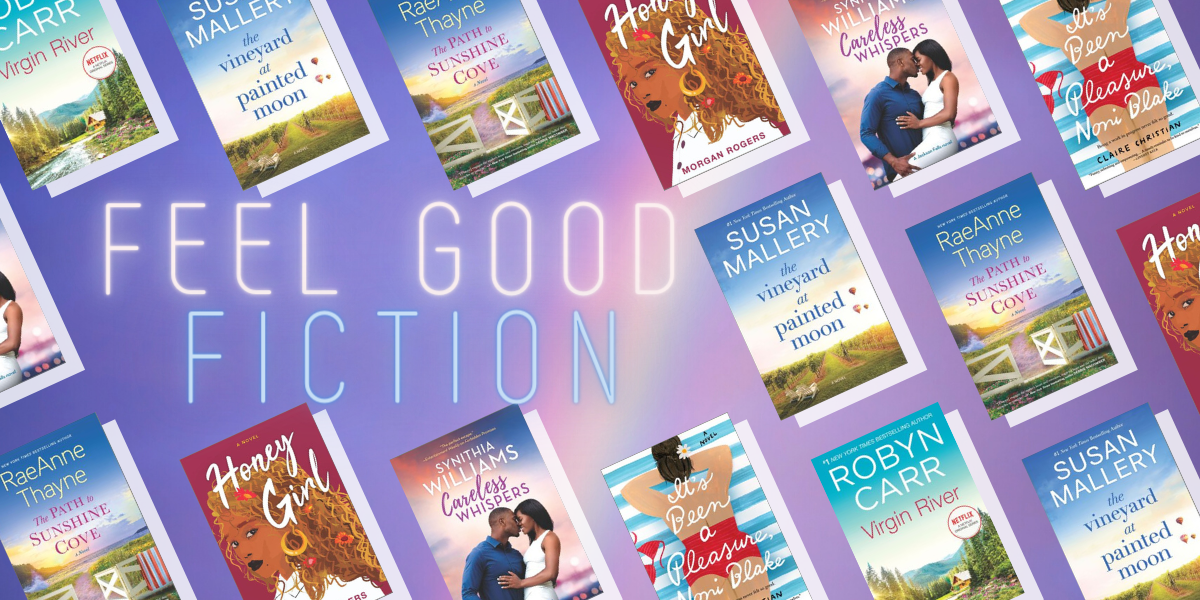 Are the blahs and boredom of winter getting you down? Us, too. Thankfully, reading’s to the rescue! Grab a warm drink, the best blanket, and cozy into these feel good fiction picks. Leave reality behind with nostalgia, friends, family, and wine—whatever way you choose to escape!

He said he was looking for a “partner in crime,” which everyone knows is shorthand for “a woman who isn’t real.”

April is kind, pretty and relatively normal—yet she can’t seem to get past date five. Every time she thinks she’s found someone to trust, they reveal themselves to be awful, leaving her heartbroken. And angry. Until she realizes that men aren’t looking for real women—they’re looking for Gretel.

Gretel is perfect—beautiful but low-maintenance, sweet but never clingy, sexy but not too easy. She’s your regular, everyday Manic-Pixie-Dream-Girl-Next-Door with no problems.

When April starts pretending to be Gretel, dating becomes much more fun—especially once she reels in the unsuspecting Joshua. Finally, April is the one in control. It’s refreshing. Exhilarating, even. But as she and Joshua grow closer, and the pressure of keeping her painful past a secret begins to build, how long will she be able to keep on pretending?

HONEY GIRL is an emotional, heartfelt, charming debut, and I loved every moment of it.”— Jasmine Guillory, New York Times bestselling author of The Proposal

To Catch a Dream by Audrey Carlan

When their mother passed away, Evie Ross and her sister were each given a stack of letters, one to be opened every year on their birthday; letters their free-spirited mother hoped would inspire and guide them through adulthood. But although Evie has made a successful career, her desire for the stability and security she never had from her parents has meant she’s never experienced the best life has to offer. But the discovery of more letters hidden in a safe-deposit box points to secrets her mother held close, and possibly a new way for Evie to think about her family, her heart and her dreams.

“Audrey Carlan has created a gem of a story about sisterhood, love, second chances, and the kind of wanderlust that won’t be silenced, reminding us that sometimes the most important journey is the one we take home.” —Lexi Ryan, New York Times bestselling author

The Path to Sunshine Cove by RaeAnne Thayne

She knows what’s best for everyone but herself…

With a past like hers, Jessica Clayton feels safer in a life spent on the road. She’s made a career out of helping others downsize—because she’s learned the hard way that the less “stuff,” the better, a policy she applies equally to her relationships. But a new client is taking Jess back to Cape Sanctuary, a town she once called home…and that her little sister, Rachel, still does. The years apart haven’t made a dent in the guilt Jess still carries after a handgun took the lives of both their parents and changed everything between them.

While Jess couldn’t wait to put the miles between her and Cape Sanctuary, Rachel put down roots, content for the world—and her sister—to think she has a picture-perfect life. But with the demands of her youngest child’s disability, Rachel’s marriage has begun to fray at the seams. She needs her sister now more than ever, yet she’s learned from painful experience that Jessica doesn’t do family, and she shouldn’t count on her now.

Against her judgment, Jess finds herself becoming attached—to her sister and her family, even to her client’s interfering son, Nate—and it’s time to put everything on the line. Does she continue running from her painful past, or stay put and make room for the love and joy that come along with it?

How to Keep a Secret by Sarah Morgan

Three generations of Stewart women with secrets to keep. One unforgettable summer that will change their lives forever.

Lauren has the perfect life…if she ignores the fact that it’s a fragile house of cards, and that her daughter, Mack, has just had a teenage personality transplant.

Jenna is desperate to start a family with her husband, but it’s just. Not. Happening. Her heart is breaking, but she’s determined to keep her trademark smile on her face so no one ever knows.

Nancy knows she hasn’t been the best mother, but how can she ever tell Lauren and Jenna the devastating reason why? She’ll do anything to protect her daughters…even keep them at arm’s length.

Then life changes in an instant, and Lauren, Mack, Jenna and Nancy are thrown together for a summer at Martha’s Vineyard. Somehow, these very different women must relearn how to be a family. And while unraveling their secrets might be their biggest challenge, the rewards could be infinite…

Are you putting any of these books on your TBR list? Let us know which ones!