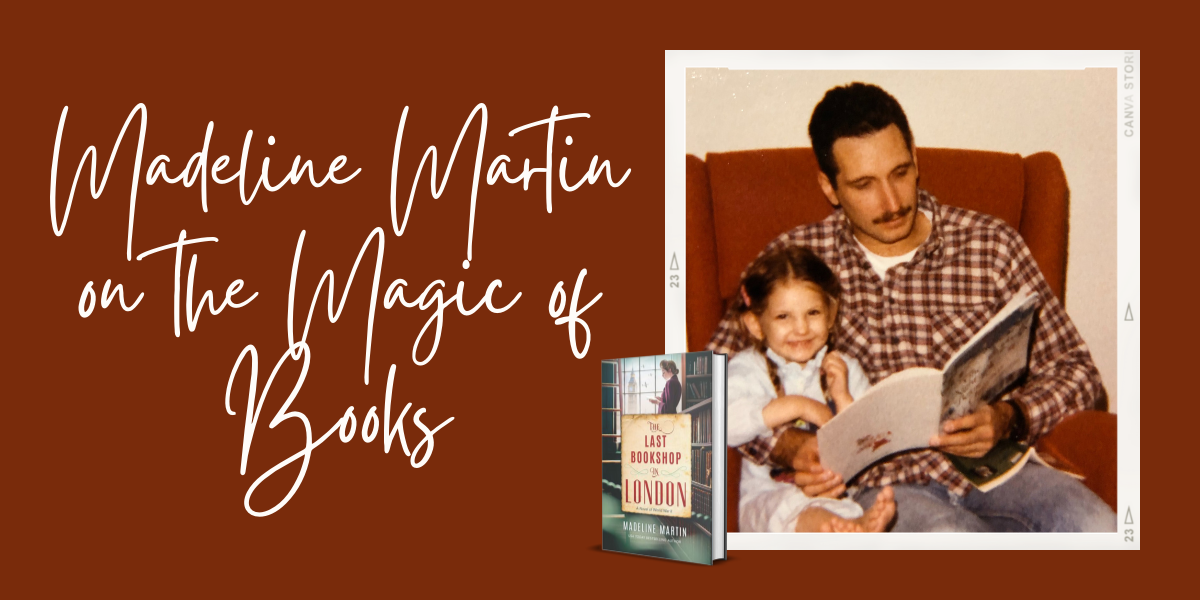 Today, we’re introducing you to Madeline Martin, author of The Last Bookshop in London! Books play a very important role in the novel and Madeline’s here to let us know about how they shaped her life personally. As book lovers, we can find a little bit of ourselves in the book’s main character, Grace. So, without further ado…

Books have always been a big part of my life. I grew up in a family of readers, where evenings were spent with the TV off and each of us with our respective books propped in our laps.  Some of my favorites were Laura Ingalls Wilder’s The Little House series, which I read over and over again, as well as biographies of women in history, and thrilling tales by R.L. Stine and Christopher Pike.

We were a military family, which meant we had the opportunity for some pretty incredible experiences that included three different tours in Germany. As an adult now, I wouldn’t trade the amazing things I’ve been able to see and do for anything. But as a shy child who moved every four years, constantly starting over with being the new kid and having to make friends all over again wasn’t always easy.

That’s how I found my love of reading.

Books offered an escape from reality, and while I believe that was part of it, I think the biggest aspect was the bond I had with the characters. The story wasn’t just taking me away from the awkwardness of knowing I was sitting at a lunch table by myself with a book spread out between my fingers, it was about the characters who ‘got me’, ones who were going through similar situations and experiencing similar emotions.

They weren’t the most popular kid at school; I wasn’t either.

They were imperfect no matter how hard they tried not to be; I was too.

They constantly felt like a fish out of water; I also did.

In a world where I so often felt ‘outside looking in’, they were ‘outside’ with me. I connected with those characters on a deep level.

So it was that at every new school, I learned where the library was more quickly than the front office and the librarians usually became my first friends. Over time, my classmates became friends as well and eventually I shed most of my shyness and grew more outgoing, but the impact of my affection for books never disappeared.

The love of reading is a precious, wonderful thing. That is why I made it the focus of The Last Bookshop in London. I really wanted to show the impact of books making a difference not only in Grace’s life, but how the change in one person can also affect others’ lives as well. What’s more, I believe there is magic in discovering the joy of reading. I had Grace not being much of a reader at the start of the story so that the reader could witness through her eyes the joy of discovering books and reading all over again.

My hope with The Last Bookshop in London is that readers find a connection with Grace the way I’ve done with characters my whole life and that readers come away smiling with the recollection of their own experience of falling in love with books. The tumultuous backdrop of London during the Blitz in WWII is also a reminder that no matter what dark days we may face, we can always find light in books.