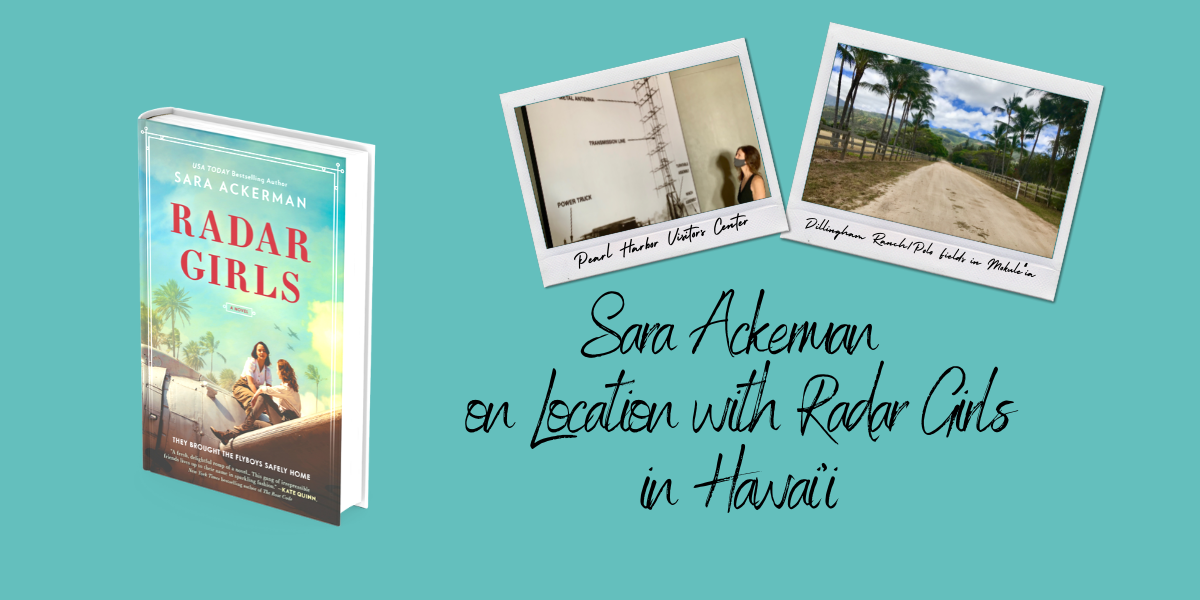 The much anticipated Radar Girls is an amazing story inspired by the real Women’s Air Raid Defense during the WWII. Author Sara Ackerman takes us on location with her in Hawai’i, where the story is set, sharing what it takes for an author to capture the beauty of a place in a book. Without further ado…

Picture this: a long white sandy beach with no one on it but a few turtles. You walk along with your toes in the sand, searching for signs of an old airstrip between the ironwood trees. The ocean is blue and deep, the wind cool in your hair. It may sound like a dreamy vacation, but for me, it’s research. It’s one of the perks of writing WWII novels set in Hawaiʻi, or any beautiful locale for that matter.

With each of my novels, my research has been a bit different. The bedrock of my ideas, though, have been stories I’ve gathered from my parents and grandparents, who were here throughout the war. I’ve also interviewed numerous elders, read dozens of fascinating books and oral histories, and watched Pearl Harbor movies and documentaries. But one of my favorite parts of the research involves visiting the places in my books. When an author intimately knows the setting, I believe it translates to a more authentic experience for the reader. Little details, like what time of year the ginger blooms, the smell of burning sugar cane, or how cool the temperatures are in December, can make a big impact. I’ve often felt that in my novels setting is its own character.

There’s a tiny old airstrip in Haleʻiwa that became well known when a handful of pilots raced out there the morning of the attack on Pearl Harbor. Many US planes at Hickam and Wheeler air bases had been demolished in the invasion, but a few P-40s were sitting patiently at Haleʻiwa, waiting to see some action. The opening scene from my novel takes place not far from there, so I wanted to revisit the coastline before I began writing. I imagined how it might have been nearly 80 years ago, dogfights overhead, guns firing.

ʻIolani Palace is another fascinating setting in the book. The palace is the only official royal residence in the United States, and was once home to Hawaiʻi’s last reigning monarchs, before the overthrow of the Hawaiian Kingdom in 1893. The day after the attack on Pearl Harbor, Iolani Palace was commandeered by the military when martial law was declared. The Women’s Air Raid Defense recruits received their first secret training in a blacked-out room in the palace. At a large plotting board in the center of the room, the women practiced receiving radar readings from Oscars (code name of the men at the radar units) to the Rascals (code name for the WARDs). In those early weeks of the war, air raid alarms were plentiful and an invasion was thought to be imminent.

Another scene takes place at Station Opana, the infamous radar site on a north shore bluff that unknowingly picked up the Japanese planes flying towards Oahu on December 7, but mistook them for army bombers coming in from California. In Radar Girls, Daisy and her friends make an unauthorized trip up there and get to see the SRC-270 up close and personal. This was one of the first operational early-warning mobile radar units. Though I wasn’t able to visit the actual site, which is currently a Navy telecommunications station, I went and checked out some of the “pillboxes” down below on the coast. The area is in a training flight path for military planes and helicopters, so it makes it easy to sense the danger that was once felt here.

Speaking of Daisy and her friends, my other favorite part of writing this book was getting to know the real women of the WARD and then later watching my characters come to life on the page. When I first read the book Shuffleboard Pilots: The History of the Women’s Air Raid Defense in Hawaiʻi, which was compiled by former WARDs, I was in tears. It is full of vintage photos and anecdotes of what these women lived through. Some fun, most remarkable, and some heartbreaking. It was extremely moving to read about the sacrifices they made to defend our country, and how they held each other up throughout the whole war. Those were not easy times, and they rose to the occasion and then some. They also maintained a great sense of humor, which I suspect helped them through. I knew I wanted to use their stories, but also to create my own characters. Which is exactly what happened. I truly love these ladies and I hope that you will, too!

Some places in the book to visit should you find yourself in Hawaiʻi: Turtle Bay Resort pillbox, ʻIolani Palace, Puaʻena Point (near the Hale’iwa Airfield), Dillingham Ranch/Polo Fields in Mokuleʻia, and of course, Pearl Harbor and the Arizona Memorial.