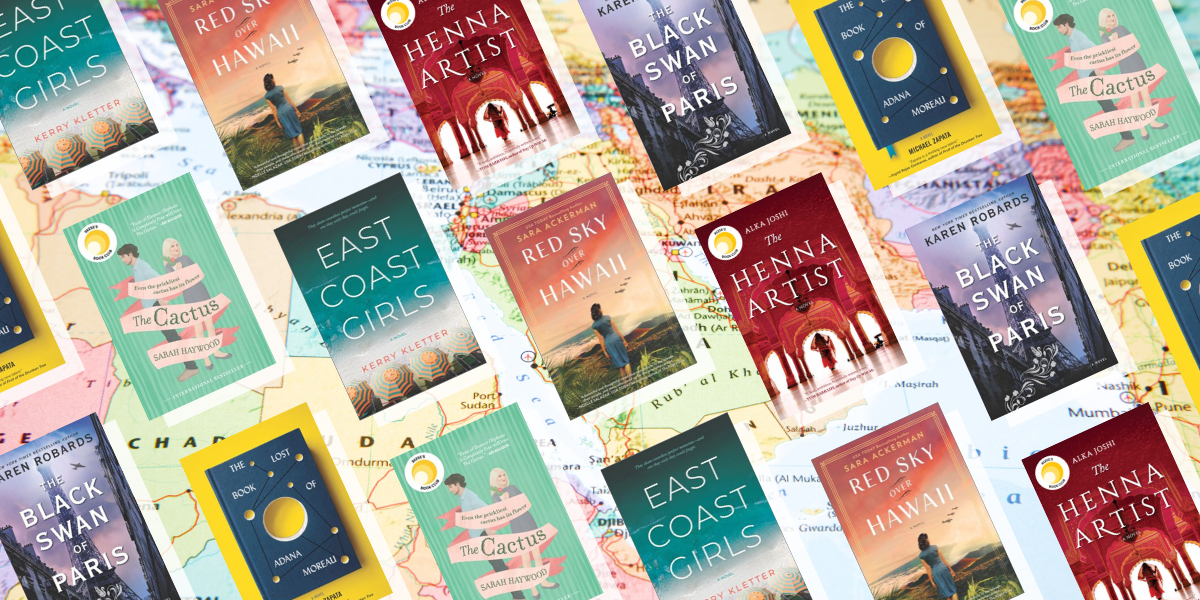 You don’t need to travel further than your backyard to go on an adventure with these books! Whether you’re longing to see Paris, Hawaii, or somewhere else entirely, these excellent reads are sure to take you on a journey. The best part? Packing is NOT required!

Travel to India with The Henna Artist by Alka Joshi

Travel to Montauk with East Coast Girls by Kerry Kletter

Travel to Hawaii with Red Sky Over Hawaii by Sara Ackerman

Inspired by real places and events of WWII, Red Sky Over Hawaii immerses the reader in a time of American history full of suspicion and peril in this lush and poignant tale about the indisputable power of doing the right thing against all odds.

The attack on Pearl Harbor changes everything for Lana Hitchcock. Arriving home on the Big Island too late to reconcile with her estranged father, she is left alone to untangle the clues of his legacy, which lead to a secret property tucked away in the remote rain forest of Kilauea volcano. When the government starts taking away her neighbors as suspected sympathizers, Lana shelters two young German girls, a Japanese fisherman and his son. As tensions escalate, they are forced into hiding—only to discover the hideaway house is not what they expected.

When a detainment camp is established nearby, Lana struggles to keep the secrets of those in her care. Trust could have dangerous consequences. As their lives weave together, Lana begins to understand the true meaning of family and how the bonds of love carry us through the worst times.

Travel to Italy with The Summer Villa by Melissa Hill

Three women. One summer reunion. Secrets will be revealed…

Villa Dolce Vita, a rambling stone house on the Amalfi Coast, sits high above the Gulf of Naples amid dappled lemon groves and fragrant, tumbling bougainvillea. Kim, Colette and Annie all came to the villa in need of escape and in the process forged an unlikely friendship.

Now, years later, Kim has transformed the crumbling house into a luxury retreat and has invited her friends back for the summer to celebrate.

But as friendships are rekindled under the Italian sun, secrets buried in the past will come to light, and not everyone is happy that the three friends are reuniting… Each woman will have things to face up to if they are all to find true happiness and fully embrace the sweet life.

An epic summer read about food, friendship and the magic of Italy, perfect for fans of Mary Kay Andrews and Susan Mallery

Travel to the UK with The Cactus by Sarah Haywood

In this charming and poignant debut, one woman’s unconventional journey to finding love means learning to embrace the unexpected.

For Susan Green, messy emotions don’t fit into the equation of her perfectly ordered life. She has a flat that is ideal for one, a job that suits her passion for logic, and an “interpersonal arrangement” that provides cultural and other, more intimate, benefits. But suddenly confronted with the loss of her mother and the news that she is about to become a mother herself, Susan’s greatest fear is realized. She is losing control.

Enter Rob, the dubious but well-meaning friend of her indolent brother. As Susan’s due date draws near and her dismantled world falls further into a tailspin, Susan finds an unlikely ally in Rob. She might have a chance at finding real love and learning to love herself, if only she can figure out how to let go.

In 1929 in New Orleans, a Dominican immigrant named Adana Moreau writes a science fiction novel. The novel earns rave reviews, and Adana begins a sequel. Then she falls gravely ill. Just before she dies, she destroys the only copy of the manuscript.

Decades later in Chicago, Saul Drower is cleaning out his dead grandfather’s home when he discovers a mysterious manuscript written by none other than Adana Moreau. With the help of his friend Javier, Saul tracks down an address for Adana’s son in New Orleans, but as Hurricane Katrina strikes they must head to the storm-ravaged city for answers.

What results is a brilliantly layered masterpiece—an ode to home, storytelling and the possibility of parallel worlds.

Share with us! Where would you take a vacation to right now if you had the chance?

2 thoughts on “Book Your Summer Escape with These Reads!”