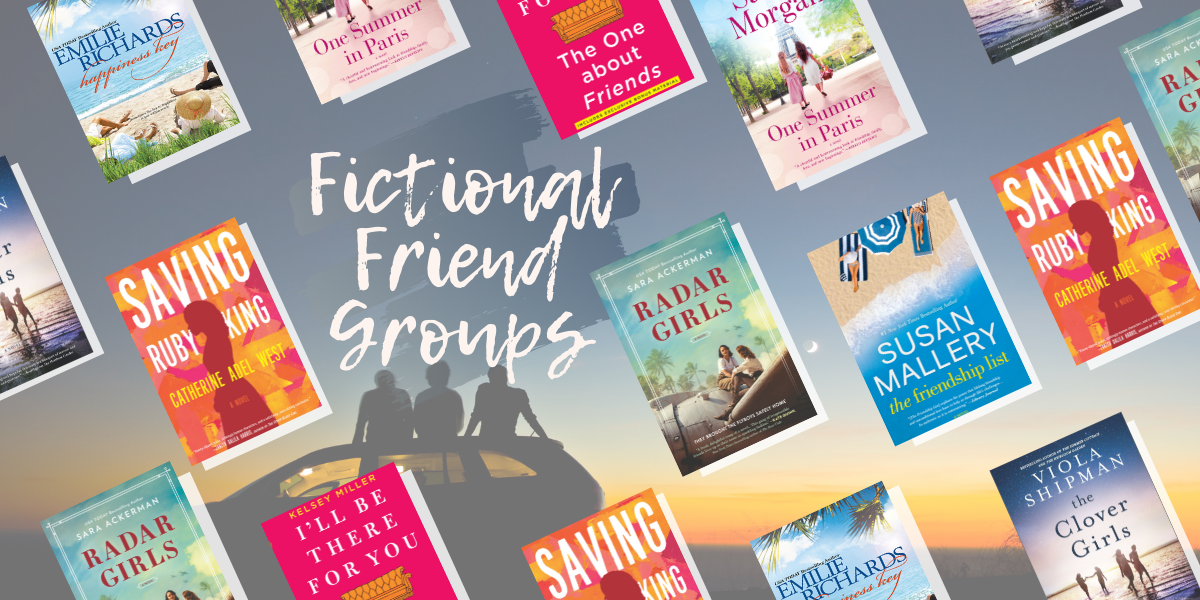 What would we do without our friends? From friends who defy the odds together in Radar Girls by Sara Ackerman to changes in friendships in The Clover Girls by Viola Shipman, in honor of International Friendship Day, here are some amazing fictional friend groups we want to be apart of.

The members of the Women’s Air Raid Defense weren’t just sisters-in-arms forging their place in WWII history, they were a tight knit group of friends who found themselves under the most trying of circumstances.

Together they form unbreakable bonds and find courage and strength in their sisterhood. This inspiring and uplifting tale of pioneering, unsung heroines vividly transports the reader to wartime Hawaii.

Daisy Wilder prefers the company of horses to people, bare feet and salt water to high heels and society parties. Then, in the dizzying aftermath of the attack on Pearl Harbor, Daisy enlists in a top secret program, replacing male soldiers in a war zone for the first time.

But not everyone thinks the women are up to the job, and the new recruits must rise above their differences and work side by side despite the resistance and heartache they meet along the way. From radar towers on remote mountaintops to flooded bomb shelters, she’ll need her new team when the stakes are highest. Because the most important battles are fought—and won—together.

ONE SUMMER IN PARIS BY SARAH MORGAN

This story highlights an unlikely friendship that develops between a newly single forty-something Grace and the rebellious teenager Audrey. It follows the heart-warming ups and downs of their relationship as they teach each other about family, love, sex and self-confidence.

To celebrate their twenty-fifth wedding anniversary, Grace has planned the surprise of a lifetime for her husband—a romantic getaway to Paris. But she never expected he’d have a surprise of his own: he wants a divorce. Reeling from the shock but refusing to be broken, a devastated Grace makes the bold decision to go to Paris alone.

Audrey, a young woman from London, has left behind a heartache of her own when she arrives in Paris. A job in a bookshop is her ticket to freedom, but with no money and no knowledge of the French language, suddenly a summer spent wandering the cobbled streets alone seems much more likely…until she meets Grace, and everything changes.

They came to Paris to find themselves, but finding this unbreakable friendship might be the best thing that’s ever happened to them…

A witty, heartfelt and irresistible story about two best friends determined to help one another shake things up and live life to the fullest in a summer that will change them forever.

Single mom Ellen Fox couldn’t be more content—until she overhears her son saying he can’t go to his dream college because she needs him too much. If she wants him to live his best life, she has to convince him she’s living hers.

THE CLOVER GIRLS BY VIOLA SHIPMAN

“Like a true friendship, The Clover Girls is a novel you will forever savor and treasure.” —Mary Alice Monroe, New York Times bestselling author

Elizabeth, Veronica, Rachel and Emily met at Camp Birchwood as girls in 1985, where over four summers they were the Clover Girls—inseparable for those magical few weeks of freedom—until the last summer that pulled them apart. Now approaching middle age, the women are facing challenges they never imagined as teens, struggles with their marriages, their children, their careers, and wondering who it is they see when they look in the mirror.

Then Liz, V and Rachel each receive a letter from Emily with devastating news. She implores the girls who were once her best friends to reunite at Camp Birchwood one last time, to spend a week together revisiting the dreams they’d put aside and repair the relationships they’d allowed to sour. But the women are not the same idealistic, confident girls who once ruled Camp Birchwood, and perhaps some friendships aren’t meant to last forever…

Mesmerizing and unforgettable, Amy Mason Doan’s The Summer List is about losing and recapturing the person who understands you best—and the unbreakable bonds of girlhood.

RULES OF THE ROAD BY CIARA GERAGHTY

In this emotional, life-affirming novel, two women embark on an extraordinary road trip and discover the transformative power of female friendship.

Tuesday morning starts like any other–until Terry discovers her best friend, Iris, has gone missing. Finding her takes Terry, Iris and Terry’s confused father, Eugene, on an extraordinary journey, one that will change all of their lives. And along the way, what should be the worst six days of Terry’s life turn into the best.

Because friendship teaches us all to be brave–and that sometimes the rules are made to be broken.

Four women who think they have nothing in common except the oyster-shell road that runs between their ramshackle beach cottages on a spit of land called Happiness Key join forces. Together, they discover difficult truths about their own lives and the men they love—and uncover the treasure of an unlikely friendship.

With her husband in prison, pampered Tracy Deloche is left with five ramshackle beach houses and no idea how to start over. Janya Kapur left her close-knit Indian family for an arranged marriage to a man she barely knows. Wanda Gray takes a job guaranteed to destroy her already failing marriage—if her husband cares enough to notice. Widow Alice Brooks has grown forgetful and confused. Her family comes to stay with her, but Alice isn’t sure she’s grateful.

When the only other resident of Happiness Key dies alone in his cottage, the four women warily join forces to find his family. Together they discover difficult truths about their own lives and the men they love—and uncover the treasure of an unlikely friendship.

I’LL BE THERE FOR YOU BY KELSEY MILLER

Calling all fans of THE show about Friends. I’ll Be There for You is the definitive retrospective of Friends, not only for fans of the series, but for anyone who’s ever wondered what it is about this show—and television comedy—that resonates so powerfully.

THE GIRLS WITH NO NAMES BY SERENA BURDICK

A beautiful tale of hope, courage, and sisterhood—inspired by the real House of Mercy and the girls confined there for daring to break the rules.

Which friend group do you want to be apart of? Let us know in the comments below!