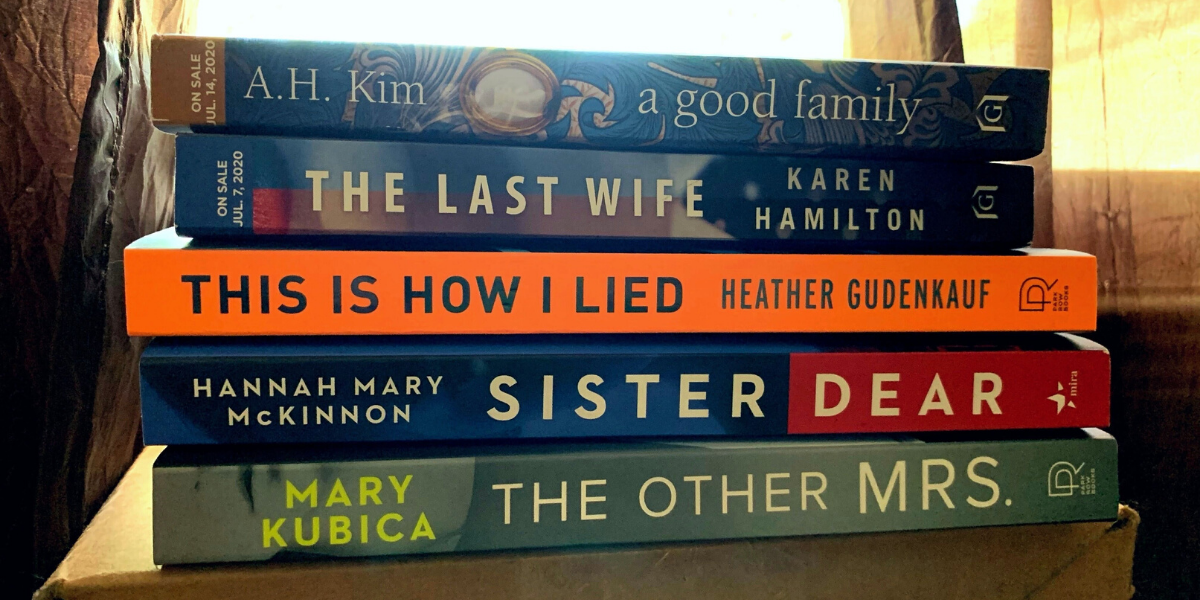 Summer and suspense is a pairing we’re here for. These seven novels will chill you down on a long, hazy summer afternoon. Keep in mind, we definitely recommend reading these stories while the sun’s still up…or you may not be able to handle all the twists and turns in these pulse-pounding thrillers.

The Last Wife by Karen Hamilton

From the internationally bestselling author of The Perfect Girlfriend.

Nina and Marie were best friends—until Nina was diagnosed with a terminal illness. Before she died, Nina asked Marie to fulfill her final wishes.

But her mistake was in thinking Marie was someone she could trust.

What Nina didn’t know was that Marie always wanted her beautiful life, and that Marie has an agenda of her own. She’ll do anything to get what she wants.

Marie thinks she can keep her promise to her friend’s family on her own terms. But what she doesn’t know is that Nina was hiding explosive secrets of her own…

She’s got it all.

And it all should’ve been mine.

When Eleanor Hardwicke’s beloved father dies, her world is further shattered by a gut-wrenching secret: the man she’s grieving isn’t really her dad. Eleanor was the product of an affair and her biological father is still out there, living blissfully with the family he chose. With her personal life spiraling, a desperate Eleanor seeks him out, leading her to uncover another branch on her family tree—an infuriatingly enviable half sister.

Perfectly perfect Victoria has everything Eleanor could ever dream of. Loving childhood, luxury home, devoted husband. All of it stolen from Eleanor, who plans to take it back. After all, good sisters are supposed to share. And quiet little Eleanor has been waiting far too long for her turn to play.

This Is How I Lied by Heather Gudenkauf

“Gudenkauf proves herself the master of the smart, suspenseful small-town thriller that gets right under your skin.” —Gilly Macmillan, New York Times bestselling author of The Nanny

Everyone has a secret they’ll do anything to hide…

Twenty-five years ago, the body of sixteen-year-old Eve Knox was found in the caves near her home in small-town Grotto, Iowa—discovered by her best friend, Maggie, and her sister, Nola. There were a handful of suspects, including her boyfriend, Nick, but without sufficient evidence the case ultimately went cold.

For decades Maggie was haunted by Eve’s death and that horrible night. Now a detective in Grotto, and seven months pregnant, she is thrust back into the past when a new piece of evidence surfaces and the case is reopened. As Maggie investigates and reexamines the clues, secrets about what really happened begin to emerge. But someone in town knows more than they’re letting on, and they’ll stop at nothing to keep the truth buried deep.

Stranger in the Lake by Kimberly Belle

When Charlotte married the wealthy widower Paul, it caused a ripple of gossip in their small lakeside town. They have a charmed life together, despite the cruel whispers about her humble past and his first marriage. But everything starts to unravel when she discovers a young woman’s body floating in the exact same spot where Paul’s first wife tragically drowned.

At first, it seems like a horrific coincidence, but the stranger in the lake is no stranger. Charlotte saw Paul talking to her the day before, even though Paul tells the police he’s never met the woman. His lie exposes cracks in their fragile new marriage, cracks Charlotte is determined to keep from breaking them in two.

As Charlotte uncovers dark mysteries about the man she married, she doesn’t know what to trust—her heart, which knows Paul to be a good man, or her growing suspicion that there’s something he’s hiding in the water.

What was the last thriller that you kept you up at night? Let us know in the comments below!