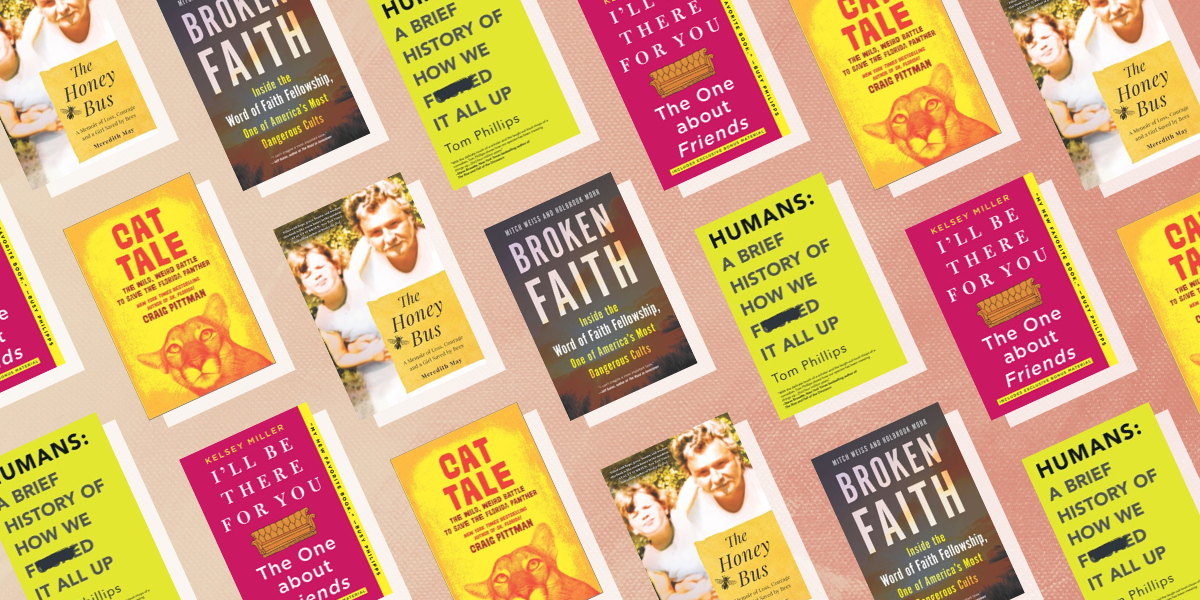 Nonfiction is one of those genres that really is underrated sometimes. We’re big fans of nonfiction, especially if they have great storytelling incorporated in them. These books are great examples of nonfiction that feature captivating, witty, or inspiring stories. If you’ve been wanting to pick up a nonfiction title but you’re scared it won’t be a real page-turner, try these on for size!

Humans: A Brief History of How We F*cked It All Up by Tom Phillips

Weaving together history, science, politics and pop culture, Humans offers a panoramic exploration of humankind in all its glory, or lack thereof. From Lucy, our first ancestor, who fell out of a tree and died, to General Zhou Shou of China, who stored gunpowder in his palace before a lantern festival, to the Austrian army attacking itself one drunken night, to the most spectacular fails of the present day, Humans reveals how even the most mundane mistakes can shift the course of civilization as we know it. Lively, wry and brimming with brilliant insight, this unique compendium offers a fresh take on world history and is one of the most entertaining reads of the year.

An explosive investigation into Word of Faith Fellowship, a secretive evangelical cult whose charismatic female leader is a master of manipulation

In 1979, a fiery preacher named Jane Whaley attracted a small group of followers with a promise that she could turn their lives around.

In the years since, Whaley’s following has expanded to include thousands of congregants across three continents. In their eyes she’s a prophet. And to disobey her means eternal damnation.

The control Whaley exerts is absolute: she decides what her followers study, where they work, whom they can marry—even when they can have sex.

Based on hundreds of interviews, secretly recorded conversations, and thousands of pages of documents, Pulitzer Prize winner Mitch Weiss and Holbrook Mohr’s Broken Faith is a terrifying portrait of life inside the Word of Faith Fellowship, and the harrowing account of one family who escaped after two decades.

The Honey Bus by Meredith May

An unforgettable story about finding home in the most unusual of places, and how a tiny, little-understood insect could save a life.

Meredith May recalls the first time a honeybee crawled on her arm. She was five years old, her parents had recently split and suddenly she found herself in the care of her grandfather, an eccentric beekeeper who made honey in a rusty old military bus in the yard. That first close encounter was at once terrifying and exhilarating for May. Everything she needed to know about life and family was right before her eyes, in the secret world of bees.

May turned to her grandfather and the art of beekeeping as an escape from her troubled reality. The bees became a guiding force in May’s life, teaching her about family and survival, and it was during this pivotal time in May’s childhood that she learned to take care of herself. Part family story, part beekeeping odyssey, The Honey Bus is a rich and lyrical memoir of a girl who journeyed into the hive—and found herself.

I’ll Be There for You by Kelsey Miller

SIX FRIENDS THAT BECAME A FAMILY.

A TELEVISION SHOW THAT BECAME A PHENOMENON.

I’ll Be There for You is a deep dive into Friends history and lore, exploring all aspects of the show, from its unlikely origins to the societal conditions that amplified its success. Journalist and pop culture expert Kelsey Miller relives the show’s most powerful moments, sheds light on its sometimes dated and problematic elements, and examines the worldwide trends that Friends catalyzed, from contemporary coffee culture to the wildly popular ’90s haircut The Rachel. Taking readers behind the scenes, Miller traces the cast’s rise to fame and untangles the complex relationship between the actors and their characters. Weaving in revelatory interviews and personal stories, she investigates the role of celebrity media, world-changing events and the dawning of the digital age—all of which influenced both the series and its viewers.

I’ll Be There for You is the definitive retrospective of Friends, not only for fans of the series, but for anyone who’s ever wondered what it is about this show—and television comedy—that resonates so powerfully.

“Craig Pittman has a remarkable talent for telling stories set in the Sunshine State that never fail to fascinate and entertain.”—Gilbert King

“The definitive book on one of America’s least understood apex predators. The story of how Florida’s panthers were saved from extinction is one that both deserves and needs to be told.” —Dane Huckelbridge

It wasn’t so long ago when a lot of people thought the Florida panther was extinct. They were very nearly right. That the panther still exists at all is a miracle—the result of a desperate experiment that led to the most remarkable comeback in the history of the Endangered Species Act. And no one has told the whole story—until now.

With novelistic detail and an eye for the absurd, Craig Pittman recounts the extraordinary story of the people who brought the panther back from the brink of extinction, the ones who nearly pushed the species over the edge, and the cats that were caught in the middle. This being Florida, there’s more than a little weirdness, too.

An engrossing narrative of wry humor, sharp writing and exhaustive reportage, Cat Tale shows what it takes to bring one species back and what unexpected costs such a decision brings.

The Lady from the Black Lagoon by Mallory O’Meara

As a teenager, Mallory O’Meara was thrilled to discover that one of her favorite movies, Creature from the Black Lagoon, featured a monster designed by a woman, Milicent Patrick. But for someone who should have been hailed as a pioneer in the genre, there was little information available. For, as O’Meara soon discovered, Patrick’s contribution had been claimed by a jealous male colleague, her career had been cut short and she soon after had disappeared from film history. No one even knew if she was still alive.

As a young woman working in the horror film industry, O’Meara set out to right the wrong, and in the process discovered the full, fascinating story of an ambitious, artistic woman ahead of her time. Patrick’s contribution to special effects proved to be just the latest chapter in a remarkable, unconventional life, from her youth growing up in the shadow of Hearst Castle, to her career as one of Disney’s first female animators. And at last, O’Meara discovered what really had happened to Patrick after The Creature’s success, and where she went.

A true-life detective story and a celebration of a forgotten feminist trailblazer, Mallory O’Meara’s The Lady from the Black Lagoon establishes Patrick in her rightful place in film history while calling out a Hollywood culture where little has changed since.

Do you read a lot of nonfiction? Let us know the best nonfiction title you’ve read recently!