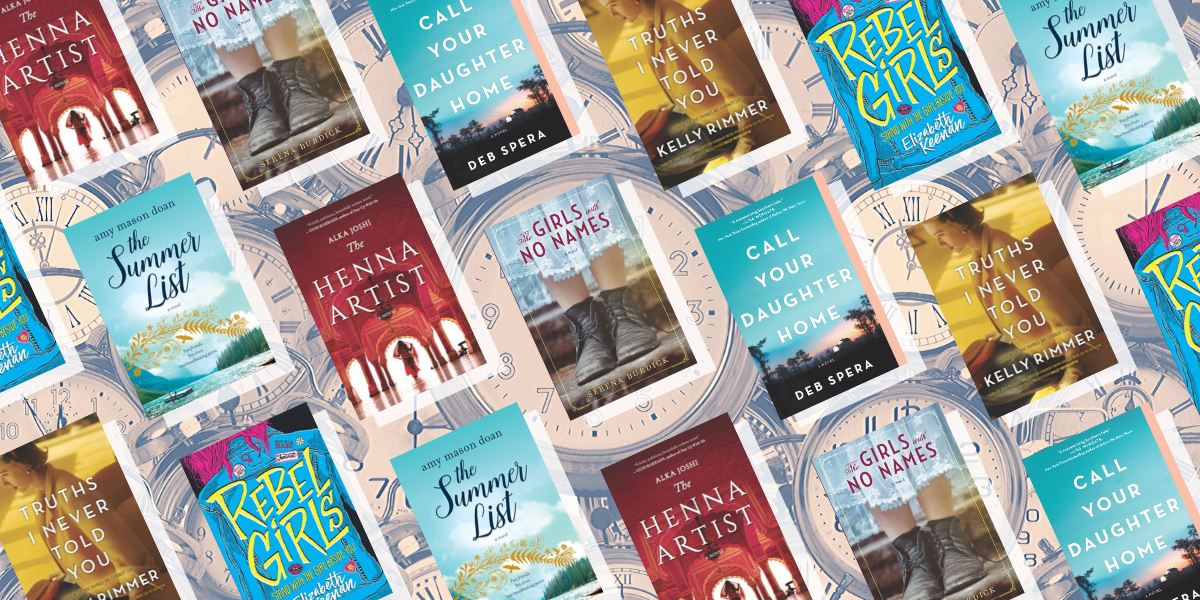 There’s no denying—a lot has changed in the past century. We’ve been reflecting on that recently with March being Women’s History Monday. Reading is an excellent way to remind us of just how far things have progressed.

If you’ve ever wanted to take a trip down memory lane (or way, way, way beyond!), these books make an excellent time travel itinerary. Starting in the 1910s with The Girls and No Names and ending in 2051 with Followers, you’ll discover that timing is everything for a story.

The Girls with No Names by Serena Burdick

The Girls with No Names pulls readers into the gilded age of New York City in the 1910s, when suffragettes marched in the street, unions fought for better work conditions—and girls were confined to the House of Mercy for daring to break the rules.

Home for Unwanted Girls meets The Dollhouse in this atmospheric, heartwarming story that explores not only the historical House of Mercy, but the lives—and secrets—of the girls who stayed there.

The Orphan’s Tale by Pam Jenoff

From the New York Times bestselling author of The Lost Girls of Paris.

A powerful novel of friendship set in a traveling circus during World War II, The Orphan’s Tale introduces two extraordinary women and their harrowing stories of sacrifice and survival

Sixteen-year-old Noa has been cast out in disgrace after becoming pregnant by a Nazi soldier and being forced to give up her baby. She lives above a small rail station, which she cleans in order to earn her keep… When Noa discovers a boxcar containing dozens of Jewish infants bound for a concentration camp, she is reminded of the child that was taken from her. And in a moment that will change the course of her life, she snatches one of the babies and flees into the snowy night.

Noa finds refuge with a German circus, but she must learn the flying trapeze act so she can blend in undetected, spurning the resentment of the lead aerialist, Astrid. At first rivals, Noa and Astrid soon forge a powerful bond. But as the facade that protects them proves increasingly tenuous, Noa and Astrid must decide whether their friendship is enough to save one another—or if the secrets that burn between them will destroy everything.

Truths I Never Told You by Kelly Rimmer

From the bestselling author of The Things We Cannot Say comes a poignant post-WWII novel that explores the expectations society places on women set within an engrossing family mystery that may unravel everything once believed to be true.

With her father recently moved to a care facility, Beth Walsh volunteers to clear out the family home and is surprised to discover the door to her childhood playroom padlocked. She’s even more shocked at what’s behind it—a hoarder’s mess of her father’s paintings, mounds of discarded papers and miscellaneous junk in the otherwise fastidiously tidy house.

As she picks through the clutter, she finds a loose journal entry in what appears to be her late mother’s handwriting. Beth and her siblings grew up believing their mother died in a car accident when they were little more than toddlers, but this note suggests something much darker.

Beth soon pieces together a disturbing portrait of a woman suffering from postpartum depression and a husband who bears little resemblance to the loving father Beth and her siblings know. With a newborn of her own and struggling with motherhood, Beth finds there may be more tying her and her mother together than she ever suspected.

Escaping from an arranged and abusive marriage, seventeen-year-old Lakshmi makes her way alone from her 1950s rural village to the vibrant pink city of Jaipur. There she becomes the henna artist—and confidante—most in demand to the wealthy women of the upper class. But trusted with the secrets of the wealthy, she can never reveal her own…

“Echoing the punk-rock feminist movement of the early ’90s, debut author Keenan creates a timely narrative that will challenge teens to reflect on their personal values and engage in respectful discourse. A must-read.” –Kirkus, starred review

When it comes to being social, Athena Graves is far more comfortable creating a mixtape playlist than she is talking to cute boys—or anyone, for that matter. Plus her staunchly feminist views and love of punk rock aren’t exactly mainstream at St. Ann’s, her conservative Catholic high school.

Then a malicious rumor starts spreading through the halls…a rumor that her popular, pretty, pro-life sister had an abortion over the summer. A rumor that has the power to not only hurt Helen, but possibly see her expelled.

Despite their wildly contrasting views, Athena, Helen, and their friends must find a way to convince the student body and the administration that it doesn’t matter what Helen did or didn’t do…even if their riot grrrl protests result in the expulsion of their entire rebel girl gang.

From the author of The Summer List, a gorgeous, emotionally satisfying novel about a secret relationship, the summer it unravels, and the reunion a decade later as one woman must come to grips with the choices of her youth.

Becc was the good girl. A dedicated student. Aspiring reporter. Always where she was supposed to be. Until a secret relationship with the charming Cal one summer in college cost her everything: her journalism dreams; her best friend, Eric; and her carefully imagined future.

A decade later, Becc’s past is back front and center as she travels up the California coast to a wedding—with a man she hasn’t seen since college. As each mile flies by, Becc can’t help but feel the thrilling push and pull of memories, from infinite nights at beach bonfires and lavish boat parties to secret movie sessions. But the man beside her is not so eager to re-create history. And as the events of that heartbreaking summer come into view, Becc must decide if those dazzling hours they once shared are worth fighting for or if they’re lost forever.

Set in the mid ’90s and 2008, Amy Mason Doan’s Summer Hours is a vividly told, unforgettable novel about the unique experience of female coming of age, the seductive power of nostalgia, and what happens when you realize you haven’t become the person you’d always promised to be.

“If anyone is going to explore a future version of our high-tech, internet-obsessed culture, please let it be Megan Angelo. Followers is pure gold.” —Abbi Jacobson, bestselling author and cocreator of Broad City

An electrifying story of two ambitious friends, the dark choices they make and the stunning moment that changes the world as we know it forever

Orla Cadden is a budding novelist stuck in a dead-end job, writing clickbait about movie-star hookups and influencer yoga moves. Then Orla meets Floss—a striving, wannabe A-lister—who comes up with a plan for launching them both into the high-profile lives they dream about. So what if Orla and Floss’s methods are a little shady—and sometimes people get hurt? Their legions of followers can’t be wrong.

Thirty-five years later, in a closed California village where government-appointed celebrities live every moment of the day on camera, a woman named Marlow discovers a shattering secret about her past. Despite her massive popularity—twelve million loyal followers—Marlow dreams of fleeing the corporate sponsors who would do anything to keep her on-screen. When she learns that her whole family history is based on a lie, Marlow finally summons the courage to run in search of the truth, no matter the risks.

Followers traces the paths of Orla, Floss and Marlow as they wind through time toward each other, and toward a cataclysmic event that sends America into lasting upheaval. At turns wry and tender, bleak and hopeful, this darkly funny story reminds us that even if we obsess over famous people we’ll never meet, what we really crave is genuine human connection.

Share with us! Let us know what decade you love reading about.