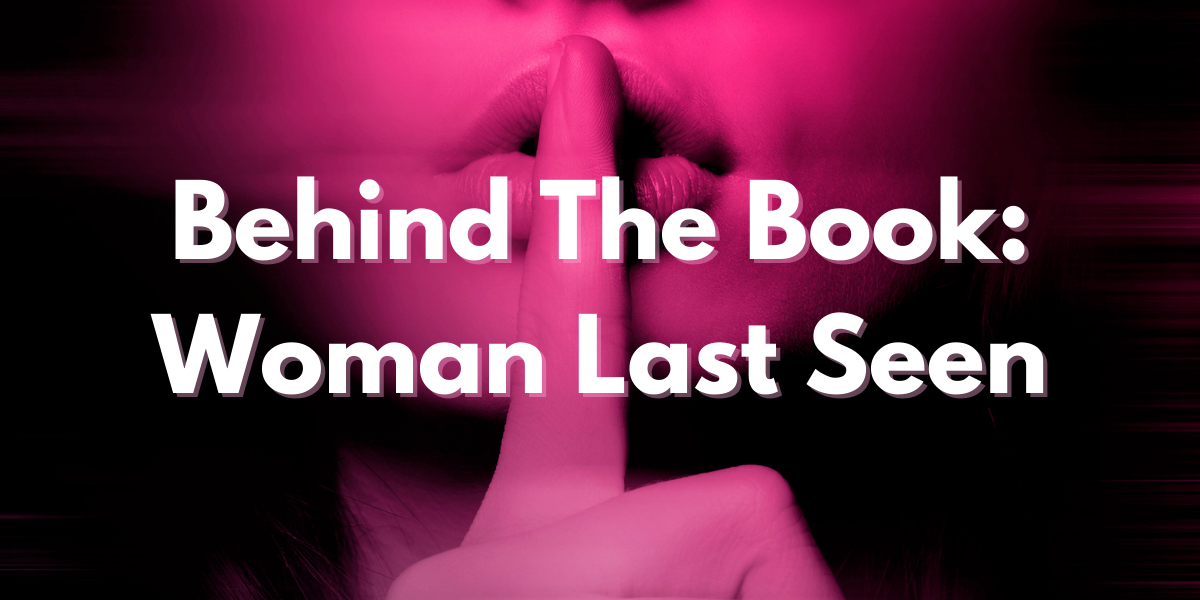 My new novel is out and I’m so excited, I just can’t hide it, I’m about to lose control and…well, you know how it goes. WOMAN LAST SEEN is a twisty, dark domestic thriller where more than one character does just that: loses control.

Two women go missing from their homes in the same week. The two women live just a few miles away from one another but their lives seem light-years apart. Leigh, the content stepmother of a couple of boys, lives in central London on a street full of busy young families; she has a demanding job that means she’s constantly trying to balance her home life and career. Kai is married to a handsome, wealthy banker and, child-free, she lives in a glamorous penthouse, and doesn’t have to work outside the home. In fact, she doesn’t have to work inside the home as she has a life full of cleaners, nutritionists, beauticians and private trainers.  Seemingly, these two women have nothing in common, other than the fact they are both reputedly happy, married and (now) missing.

However, the detective on the case suspects their disappearances might be linked. She wants to find the two women and bring them home. She’s up against the clock but determined to discover who or what took them away from their homes, and where they are now. The truth may be shocking. Devastating.

I always feel a breathless anxiety when I spot a faded, dog-eared poster on a streetlight or community notice board begging for information about a missing relative. You know the sort of thing: Have you seen my mother? I wonder about the stories and the people behind those posters. Lost souls possibly roaming the streets. I want to think that maybe they are off making a new life for themselves, but how easy is that to do? Are they stuck between here and there, present and vanished, living and dead? I imagine they are, because who walks away from their life and doesn’t cast a glance back over their shoulder? Then my mind spirals somewhere darker still. What if they didn’t walk away? Maybe they were dragged against their will. Furthermore, what of those left behind? How can they ever be resigned to the loss of someone so vital?

I used to find myself turning away from these heart-breaking posters. Afraid to catch the eye of the missing person who is stuck forever in the moment the picture was taken, instead of living, breathing, moving among their community as they should. However, I came to realize that we owe those missing people and their families our attention and I forced myself to look. I started scouring faces in crowds trying to spot people I had seen on the posters. Writing WOMAN LAST SEEN came from that instinct to acknowledge someone else’s mystery and pain. My psychological thriller gives the hundreds of thousands of missing my attention through the story of two women who have vanished.

WOMAN LAST SEEN is set in the week running up to the first lockdown in Britain. What a peculiar, disconcerting time that was for all of us, globally. We had no idea what we were facing, or how we would manage. Everyone had their own domestic dramas to solve, everyone felt losses, felt cheated and frustrated. I channelled all of that into my characters in the novel. At times the characters are lonely and isolated, literally lost in some cases, but they are also determined, resilient, focused on the future and certain that things will get better. All emotions are helpful in the book-writing process. I’ve used the lockdowns to explore how it feels to be restricted and thwarted.

This is a novel about, jealousy, retribution, loyalty, love and wanting the impossible. All the stuff that holds a family together…and tears it apart.

If you think you already believe this book is enticing enough STOP READING THIS NOW, just go and read the book 😉 because you might think what I’m about to reveal is a spoiler. If you want to know more, then…

Sadly, everyone knows someone who has been cheated on. People are complicated and fidelity is hard work sometimes; it requires willpower, self-control and resolute loyalty, which is just impossible for a lot of people. The good news is, while many of us have been two-timed, most of us bounce back.

We can shrug and accept that straying happens in some relationships. We can opt to kick their sorry arses out the door (cue the repeat playing of Gloria Gaynor “I Will Survive”). Some decide to turn a blind eye, deciding whatever has gone on is an unworthy fling, beneath notice. The third person in the relationship can be dismissed as “a bit on the side.” Not the real deal.

However, it’s not so easy to pick yourself up, dust yourself off, if your spouse is not just having an affair, but married the other person, too. Suddenly, your revered position as the one they made vows to is invalid.

Bigamy is the ultimate betrayal a spouse can commit. While researching the storyline of WOMAN LAST SEEN I corresponded with a number of bigamists and their victims. I wanted to get inside the heads of people who think they are above the law in this way. Let me tell you, inside a bigamist’s head is a murky place to dwell! But I pushed through the quagmire of self-justification, self-delusion and out-and-out chaos because it’s an exciting topic to bring to the page and I wanted my character to be authentic. I hope I’ve brought you a profoundly thought-provoking, completely different domestic drama.

I can’t wait to hear what you all think of WOMAN LAST SEEN. Please do get in touch and let me know.

“A gripping story of greed, lies and dark family secrets.”

Leigh Fletcher: happily married stepmom to two gorgeous boys goes missing on Monday. Her husband, Mark, says he knows nothing of her whereabouts. She went to work and just never came home. Their family is shattered.

Detective Clements knows that people disappear all the time—far too frequently. Most run away from things, some run toward and others are taken but find their way back. A sad few never return. These two women are from very different worlds. Their disappearances are unlikely to be connected. And yet, at a gut level, the detective believes they might be.

How could these women walk away from their families, husbands and homes willingly? Clements is determined to unearth the truth, no matter how shocking and devastating it may be.

One thought on “Behind The Book: Woman Last Seen”