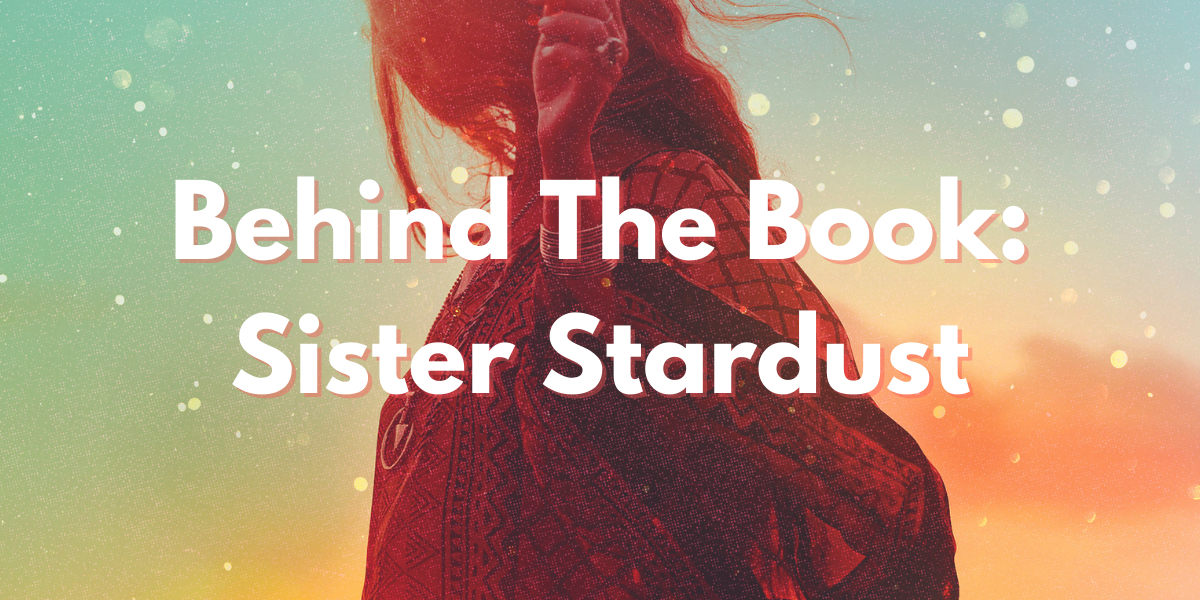 There have been moments in my life, at a party, or a restaurant, a bar, when a woman has walked in and I have known, almost instantly, that we were going to be friends. It helps if she is wearing something fabulous, something I immediately covet, has a style that I am drawn to.

When I was younger, I had a number of those friendships. They were wildly intense, and short. It was almost like a love affair, when you would suddenly find yourself doing everything together, delighted to have found a partner-in-crime, thinking that you would be friends forever, until the tiniest thing blows it all up, and you vow never to do that again.

Until the next time.

I have spent much time thinking about friendships of late. The pandemic has made many of us reassess the people with whom we choose to spend time, and two years on, many of us have either smaller, or different friendship circles to the ones we had at the beginning.

Sister Stardust tells the story of Claire, a young, insecure woman who grew up in a dysfunctional home in the English countryside in the 1960’s, who watches from afar as London bursts into color, The Beatles and the Rolling Stones become the new kings, and the streets of swinging London seem to be paved with psychedelic colorful swirls.

She makes her way there, transforms herself into the look of the moment, and is swept up by a crowd of musicians, who take her with when they travel to Marrakech, to stay in the palace of Talitha and Paul Getty, the glamorous of all glamorous couples, she a Dutch socialite and sometime actress, he the son of the richest man in the world.

To Claire it all feels impossibly decadent, glamorous, and exciting; the riches! The drugs! The parties!

But what she doesn’t expect, is the spell she will fall under when she meets Talitha Getty. It is that spell many woman are familiar with, that sense of recognition, an instant  connection so strong you instantly start making plans, knowing this is the one person with whom you will have more fun than anyone else.

I have had a few friendships like this, and suspect I may have a few more, although they are fewer now. Over the years I have learned to pace myself, to try and take things slowly, knowing that in the past, when I dived in, suddenly spending all my free time with this magical new best friend, it would burn brightly for a while, before dying out in a blaze of glory as the rose-colored glasses fell off and you each realize that the other is not perhaps the person they thought.

My sweet protagonist in Sister Stardust, Claire, who is renamed Cece by her new friends, a name they think more befitting for someone running in their circle, has not yet learned the art of pacing herself, does not realize the dangers that can come with losing yourself in someone else. We think we are safe because it isn’t a relationship, we don’t want to sleep with our friends (mostly), they can’t cause us the same pain as the men in our lives.

And yet it is so often the women in our lives that are the ones who will end up breaking our hearts.

Talitha Getty was a gorgeous woman, who ruled the bohemian world of aristocrats and rock stars in the late sixties. She and her husband lived in Rome and London, buying a dilapidated palace in Marrakech whilst on honeymoon. They spent a year renovating the palace, bringing in ornate tile and carved plaster, finally throwing a spectacular New Year’s Eve party in 1967, where people flocked from all over. John Lennon and Paul McCartney were so stoned, they spent the entire evening unable to get up from their position on the floor. Talitha became famous for her parties, which were filled with drugs from the omnipresent cannabis, to opium, and a myriad of pills.

Talitha Getty was born in 1940 in Java, the Dutch East Indies. Her father, Willem Jilts Pol, was a respected artist who had moved to Java with his wife and baby to paint. But shortly after they moved, the Japanese invaded, and immediately threw all of the Dutch into internment camps. Talitha was separated from her mother, and tortured by the guards, who would regularly poke their fingers into the children’s eyes.

Her mother died of tuberculosis shortly after being released, and although Talitha’s life looked charmed – her father remarried and they moved to London where she became part of Society, an “It Girl” who was regularly written about in the newspapers, her time in the Japanese prison camp continued to haunt her. Recognized as a beauty, described by many as an “enchantress” with an unparalleled joie de vivre, all of it hid the trauma of those early years.

I have a theory that women with damaged pasts, who have suffered some kind of trauma, gravitate towards one another. There is an invisible thread that links them, and women I have spoken to often speak about an unconscious “recognition,” when they meet other women with similar pasts.

Which is how I created Cece. I wanted to capture the magic of that very specific type of female friendship, so I gave Cece a trauma of her own, with her own mother dying young in a tragic accident. She first glimpses Talitha through a darkened window in the palace, and when she comes down, when they officially meet, they recognize each without knowing that they are both motherless daughters, both having dealt with the pain of not knowing maternal love.

Theirs is just the kind of passionate friendship I found so seductive in my younger days, even when I knew it was likely to flame out. I always wanted to believe in the triumph of hope over experience: our friendship was special, it was different. This time it would last.

Cece and Talitha become inseparable, Talitha weaving her spell around Cece, who would have given up everything in the world to be with this exotic, fun-loving woman who made her feel so good and introduced her to a bright new world. She can’t say no to her, and when, one night, the line is crossed, Cece joyfully crosses it with her, with no idea of the darkness in store.

Cece is fictional, but Talitha Getty is not. I spent almost a year researching her, for there is so little known about her, so little written. I pieced her story together from many, many books by people in her circle. I was lucky enough to talk to a couple of her lovers, and friends.

What’s a friendship you have in your life you couldn’t live without? Share with us in the comments below!