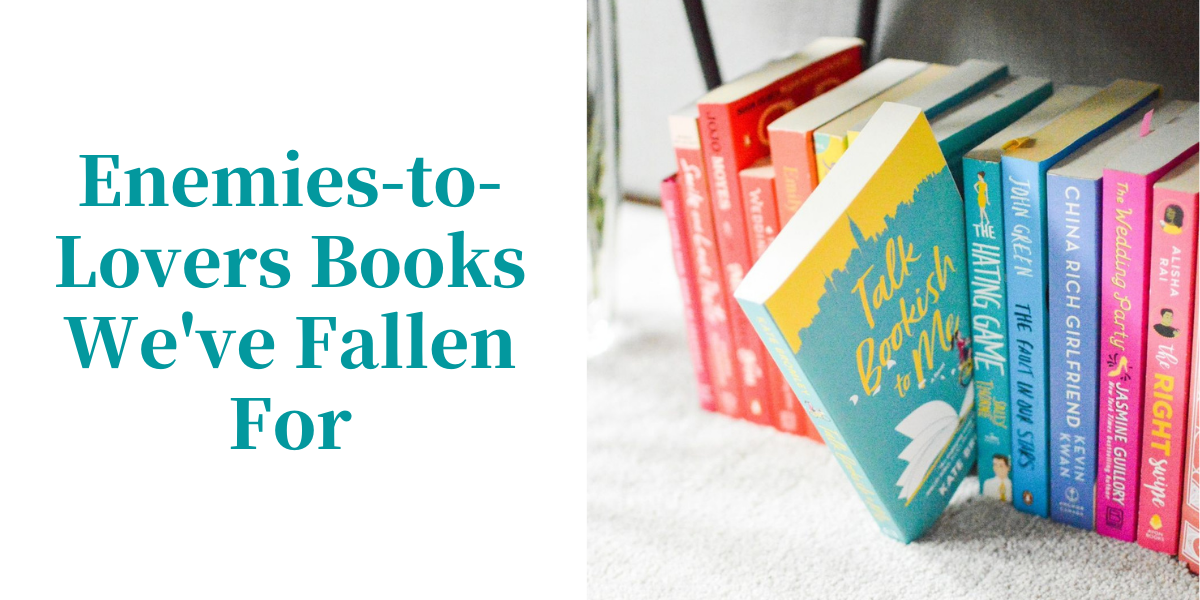 We love a good trope around here and that includes enemies-to-lovers. Sizzling passion (and tension!) can lead to a really good story. Case in point: in Talk Bookish to Me, we see Kara Sullivan try to handle big wedding stress, a huge deadline, and her infuriating ex. It’s a recipe for an endearing and laugh-out-loud book.

Sounds like a good story, right? Browse our other top enemies-to-lovers books below!

“Bromely does a deft job at keeping the twists and turns of this reunion realistic and utterly romantic.” —USA Today

Kara Sullivan’s life is full of love—albeit fictional. As a bestselling romance novelist and influential bookstagrammer, she’s fine with getting her happily-ever-after fix between the covers of a book.

“A luminous celebration of all types of love, threaded with the message that everyone is worthy of it.”—Rachel Lynn Solomon, author of The Ex Talk

You Can Go Your Own Way by Eric Smith

“A sweetly charming love story that leaves the reader with a lasting sense of hope.” —Nicola Yoon, #1 New York Times bestselling author of Everything, Everything and The Sun Is Also a Star

No one ever said love would be easy…but did they mention it would be freezing?

Adam Stillwater is in over his head. At least, that’s what his best friend would say. And his mom. And the guy who runs the hardware store down the street. But this pinball arcade is the only piece of his dad that Adam has left, and he’s determined to protect it from Philadelphia’s newest tech mogul, who wants to turn it into another one of his cold, lifeless gaming cafés.

Whitney Mitchell doesn’t know how she got here. Her parents split up. Her boyfriend dumped her. Her friends seem to have changed overnight. And now she’s spending her senior year running social media for her dad’s chain of super successful gaming cafés—which mostly consists of trading insults with that decrepit old pinball arcade across town.

But when a huge snowstorm hits, Adam and Whitney suddenly find themselves trapped inside the arcade. Cut off from their families, their worlds, and their responsibilities, the tension between them seems to melt away, leaving something else in its place. But what happens when the storm stops?

“A Love Hate Thing is an irresistible romance that you’ll gobble up whole.”—Popsugar

When they’re stuck under one roof, the house may not be big enough for their hate…or their love.

Despite having been shot, Tyson Trice has survived the mean streets of Lindenwood, so nothing can faze him—not even being tossed into the affluent coastal community of Pacific Hills.

Nandy Smith, the golden girl of Pacific Hills, is not pleased when she hears her parents are taking in a troubled teen boy. Nandy suddenly fears her summer plans, as well as her reputation, will go up in flames.

The wall between Trice and Nandy’s bedrooms feels as thin as the line between love and hate. Through time, Trice brings Nandy out of her shell, and Nandy attempts to melt the ice that’s taken over Trice’s heart. Only, with the ever-present pull back to the Lindenwood streets, it’ll be a wonder if Trice makes it through this summer at all.

Trusting him is dangerous.

But resisting him is almost impossible.

Gaby Dupont knows some men shouldn’t be trusted. Ever. Especially not high-profile lawyer Nicholas Chandler. How can she trust the man who might be helping her greedy relatives steal her family fortune? To get the inside scoop on Nicholas’s dealings—and protect herself and her beloved grandmère—Gaby must take a job with the devil himself. Of course, she can’t tell him who she really is…

Nicholas Chandler knows there’s more to Gaby Dupont than delicate beauty. She’s sweet and clever—but just too young and secretive. Yet even as they clash, Gaby gets under his skin as no other woman ever has. When Gaby comes under fire, Nicholas risks his career and reputation to keep her safe. But can he protect Gaby without losing his heart?

The Cactus by Sarah Haywood

An unforgettable love story that shows sometimes you have to embrace the unexpected.

Susan Green is like a cactus: you can’t get too close. She likes things perfectly ordered and predictable. No surprises. But suddenly confronted with the loss of her mother and the unexpected news that she is about to become a mother herself, Susan’s greatest fear is realized. She is losing control.

Enter Rob, the dubious but well-meaning friend of her lazy brother. As Susan’s due date draws near and her world falls further into a tailspin, Susan finds an unlikely ally in Rob. She might have a chance at finding real love and learning to love herself, if only she can figure out how to let go.

“I found myself laughing out loud.” —Reese Witherspoon

Locked in an unexpected land dispute, Rafe Stryker is trapped in the one place he vowed never to return to—the Castle Ranch in Fool’s Gold, California. He made millions facing ruthless adversaries in the boardroom, but nothing could’ve prepared him to go head-to-head against stubborn, beautiful Heidi Simpson. No one is more surprised than Rafe to discover that he’s finding Heidi—and life as a cowboy—much more compelling than he wants to admit.

For Heidi, the Castle Ranch is the home she’s always wanted. After a life on the road, the vivacious blonde has finally put down roots. She won’t give that up without a fight, not even for a man whose late-night kisses make her yearn to be a little less…wholesome.

The Somerset Girls by Lori Foster

“Foster convincingly brings her characters to life against the idyllic backdrop of Kentucky farmland. This down-to-earth romance will especially appeal to animal lovers.”—Publishers Weekly on The Somerset Girls

Summer in Sunset, Kentucky, means long, hot days—and sometimes surprising new beginnings. Through it all, the ties of sisterhood will be there, guiding Autumn and Ember to the lives, and loves, they need…

When they’re running the animal-rescue farm they inherited from their grandparents, Autumn and Ember Somerset are perfectly in sync. At all other times, not so much. Dependable Autumn would rather curl up with a good book than paint the town red with Ember. After the disaster that was Autumn’s last relationship, it’s pure self-protection. But when her high school crush comes back to town with his adorable young daughter, igniting memories best left forgotten, there’s only one person Autumn can turn to…

Beneath Ember’s free-spirited facade is a layer of deep hurt. She’ll gladly nudge Autumn toward a second chance. But risk her own heart? Not likely. The closer Autumn gets to her own happily-ever-after, the more Ember wonders what she might be missing—and if it isn’t her time to be bold, too.

First love. Second chances. In Catalina Cove, anything can happen…

Bryce Witherspoon’s heart races every time she sees Kaegan Chambray. Everyone in town knows they can’t stand each other, but the truth is, even though the man broke her heart ten years ago, she still feels that irresistible, oh-so-familiar jolt of desire.

When Kaegan returned to Catalina Cove to run the family business, he knew there’d be no avoiding Bryce. The woman he thought he’d one day marry was instead the biggest heartbreak of his life. But when Bryce lets slip a devastating secret, he discovers just how wrong he was to let her go all those years ago.

He knows they both still feel the spark between them, but it’ll take more than attraction to convince her. Kaegan will pull out all the stops to show Bryce he’s the man who can give her the future they once dreamed of—if only they give love a second chance.

What’s your favorite trope? Let us know in the comments below!