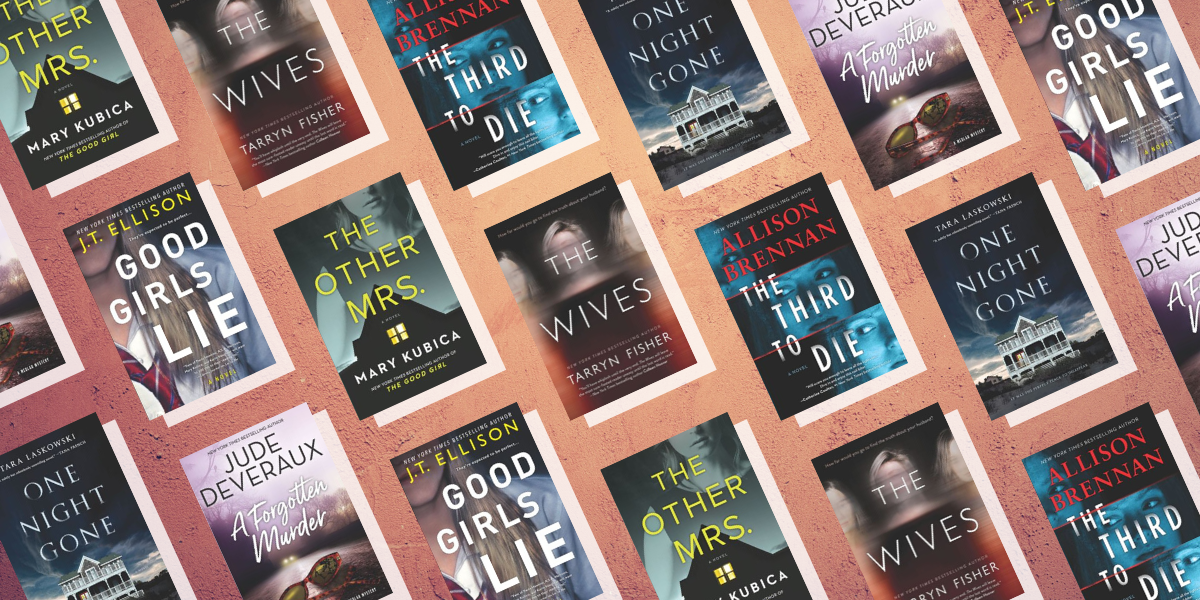 There’s nothing better than curling up with a book in the winter…even if it’s a spine-tingling suspense like these! Here’s a look at the suspense titles we’ve been anticipating all season (and even a few that are sneaking in the next).

Whether you’re a fan of a domestic noirs, medical thrillers or unsolved mysteries, we’ve got you covered with these heart-stopping reads.

Thursday’s husband, Seth, has two other wives. She’s never met them, and she doesn’t know anything about them. She agreed to this unusual arrangement because she’s so crazy about him.

But one day, she finds something. Something that tells a very different—and horrifying—story about the man she married.

What follows is one of the most twisted, shocking thrillers you’ll ever read.

You’ll have to grab a copy to find out why.

The Third to Die by Allison Brennan

An edgy female police detective…An ambitious FBI special agent. Together they are at the heart of the ticking-clock investigation for a psychopathic serial killer. The bond they forge in this crucible sets the stage for high-stakes suspense.

Detective Kara Quinn, on leave from the LAPD, is on an early morning jog in her hometown of Liberty Lake when she comes upon the body of a young nurse. The manner of death shows a pattern of highly controlled rage. Meanwhile in DC, FBI special agent Mathias Costa is staffing his newly minted Mobile Response Team. Word reaches Matt that the Liberty Lake murder fits the profile of the compulsive Triple Killer. It will be the first case for the MRT. This time they have a chance to stop this zealous if elusive killer before he strikes again. But only if they can figure out who he is and where he is hiding before he disappears for another three years. The stakes are higher than ever before, because if they fail, one of their own will be next…

J.T. Ellison’s pulse-pounding new psychological thriller examines the tenuous bonds of friendship, the power of lies and the desperate lengths people will go to in order to protect their secrets.

In a world where appearances are everything, as long as students pretend to follow the rules, no one questions the cruelties of the secret societies or the dubious behavior of the privileged young women who expect to get away with murder.

Propulsive and addictive, and perfect for fans of “You,” The Other Mrs. is the twisty new psychological thriller from Mary Kubica, the New York Times bestselling author of The Good Girl

She tried to run, but she can’t escape the other Mrs.

One Night Gone by Tara Laskowski

It was the perfect place to disappear…

One sultry summer, Maureen Haddaway arrives in the wealthy town of Opal Beach to start her life anew—to achieve her destiny. There, she finds herself lured by the promise of friendship, love, starry skies, and wild parties. But Maureen’s new life just might be too good to be true, and before the summer is up, she vanishes.

Decades later, when Allison Simpson is offered the opportunity to house-sit in Opal Beach during the off-season, it seems like the perfect chance to begin fresh after a messy divorce. But when she becomes drawn into the mysterious disappearance of a girl thirty years before, Allison realizes the gorgeous homes of Opal Beach hide dark secrets. And the truth of that long-ago summer is not even the most shocking part of all…

A young rookie medical examiner. A suspicious case. An underworld plot only she saw coming.

From the New York Times bestselling authors of Working Stiff

For San Francisco’s newest medical examiner, Dr. Jessie Teska, it was supposed to be a fresh start. A new job in a new city. A way to escape her own dark past.

Instead she faces a chilling discovery when an opioid-overdose case contains hints of something more sinister. Jessie’s superiors urge her to close the case, but as more bodies land on her autopsy table, she uncovers a constellation of deaths that point to an elaborate plot involving drug dealers and Bitcoin brokers.

Drawing on her real-life experiences as a forensics expert, Judy Melinek teams up with husband T.J. Mitchell to deliver the most exhilarating mystery of the year. Autopsy means “see for yourself,” and Jessie Teska won’t stop until she has seen it all—even if it means that the next corpse on the table could be her own.

The Woman in Apartment 49 by Ross Armstrong

Lily Gullick lives with her husband, Aiden, in a brand-new apartment opposite a building that has been marked for demolition. A keen bird-watcher, she can’t help spying on her neighbors.

Until one day Lily sees something suspicious through her binoculars, and soon her elderly neighbor Jean is found dead. Convinced of foul play, she knows she has to act. But her interference is not going unnoticed, and as she starts to get close to the truth, her own life comes under threat.

But can Lily really trust everything she sees?

The Last Affair by Margot Hunt

Love may be blind, but obsession’s a real killer.

Nora Holliday is not that kind of woman. Not the kind who has an illicit affair with a married man. But Josh Landon is everything Nora’s alcoholic husband isn’t. And now she and Josh are so infatuated, they can’t stay away from one another.

Abby Landon, Josh’s daughter, is home from college nursing a broken heart. She’s seeking solace, not more scandal, so when she catches her dad kissing Nora, she vows to take the homewrecker down.

And as for Abby’s mother and Josh’s wife, Gwen? To anyone on the outside looking in, the mother of two appears to be living the ideal suburban life.

Until she winds up dead.

The serene seaside town of Shoreham has always been the perfect place to raise a family—not somewhere housewives are brutally murdered. So who killed Gwen Landon, and how many twisted secrets will be exposed as the vindictive plot comes undone?

A Forgotten Murder by Jude Deveraux

An English manor home, an unsolved mystery, too many suspects to count… It’s the perfect holiday for romance novelist Sara Medlar.

After solving two murder cases in their hometown of Lachlan, Florida, Sara Medlar, her niece Kate and their friend Jack need a change of scenery. Sara arranges for them to visit an old friend of hers in England. Upon arrival at Oxley Manor, a centuries-old estate that has been converted to a luxury hotel, Kate and Jack quickly realize that Sara is up to something. They learn that Sara has also invited a number of others to join them at Oxley.

When everyone assembles, Sara lets them know why they are there. Decades earlier, two people ran off together from Oxley and haven’t been heard from since—and Sara wants to solve the case. As the people who were there the night the two went missing, the guests find themselves cast in a live mystery-theater event.

In reenacting the events of that night, it becomes clear that everyone has something to hide and no one is safe, especially when the discovery of a body makes it clear that at least one of the people who disappeared was murdered.

Sara, Jack and Kate are once again at the heart of a mysterious case that only they are able to solve. But someone is willing to continue to kill to keep the truth about Oxley Manor buried, and none of the guests are safe.

Before the Devil Fell by Neil Olson

Will Connor returns to his hometown, a village north of Boston, to care for his injured mother. He’s kept his distance from the town since high school, but once home he finds himself reexamining a horrific incident that took place during one of his mother’s “spirit circles.” His mother had embraced the hippie generation’s fascination with New Age and the arcane, but the unexpected death of a close friend put an end to the meetings of the modern-day coven.

As Will looks deeper into his family’s history he discovers that her practices weren’t so much a passing fad but the latest link in a long tradition of New England witchcraft, which still seems to hold a strange power over the town. Will hopes that unearthing the facts about the death will put his questions to rest, but there are those willing to resort to violence to keep those secrets buried.

Mystery Writers of America is proud to present Deadly Anniversaries, a collection of crime and mystery stories from some of the best contemporary authors, all of whom have been invited to put their own unique spin on what it means to recognize a certain day or event every year. An anniversary can take many forms, and by the time this group of bestsellers and award winners is through, none of us will ever look at anniversaries the same way again.

Edited by Marcia Muller and Bill Pronzini, this collection features original stories from twenty industry giants. Deadly Anniversaries is sure to shock, scare and delight mystery and suspense fans of all kinds.

Are you a fan of suspense books? If so, what’s the best one you’ve read last? Share it with us — we’re dying for your recommendations!