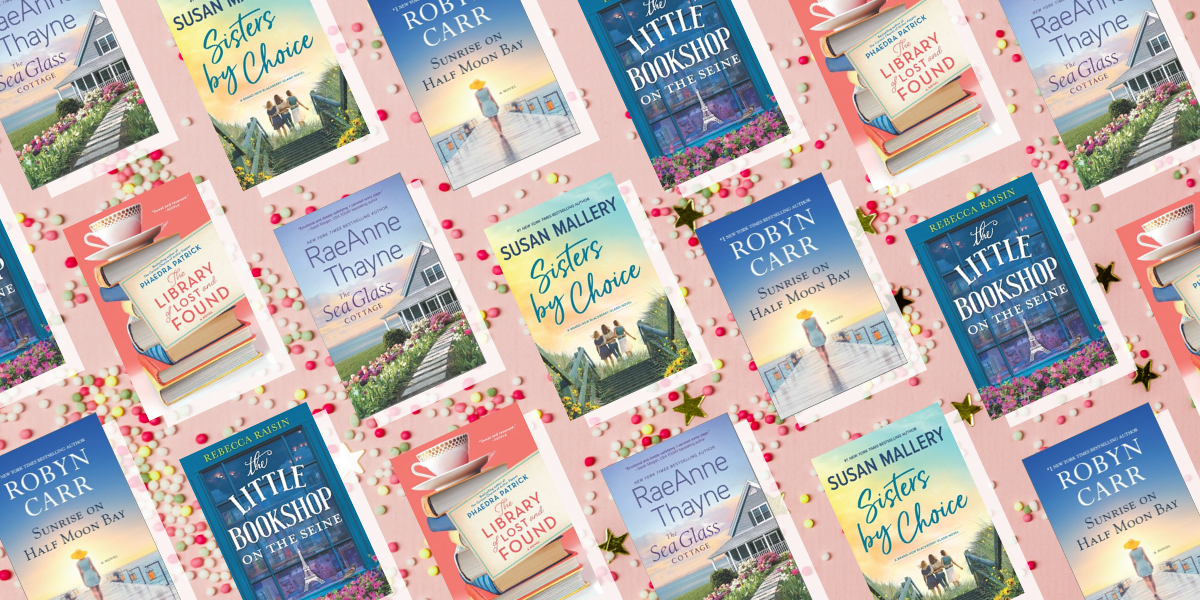 International Day of Happiness is 10 days away but who says we only have to celebrate then? Keep the good vibes going with these feel-good books by inspiring authors like Susan Mallery, Robyn Carr and RaeAnne Thayne. In this day and age, we could all use a little bit of joy and these reads make the perfect pick-me-up.

Sisters by Choice by Susan Mallery

From the New York Times bestselling author of California Girls comes an all new original Blackberry Island novel told with Susan Mallery’s trademark humor and charm. Sisters by Choice is a heartfelt tale of love, family and the friendships that see us through.

Cousins by chance, sisters by choice…

After her cat toy empire goes up in flames, Sophie Lane returns to Blackberry Island, determined to rebuild. Until small-town life reveals a big problem: she can’t grow unless she learns to let go. If Sophie relaxes her grip even a little, she might lose everything. Or she might finally be free to reach for the happiness and love that have eluded her for so long.

Kristine has become defined by her relationship to others. She’s a wife, a mom. As much as she adores her husband and sons, she wants something for herself—a sweet little bakery just off the waterfront. She knew changing the rules wouldn’t be easy, but she never imagined she might have to choose between her marriage and her dreams.

Like the mainland on the horizon, Heather’s goals seem beyond her grasp. Every time she manages to save for college, her mother has another crisis. Can she break free, or will she be trapped in this tiny life forever?

The life Olivia Harper always dreamed of isn’t so dreamy these days. The 16-hour work days are unfulfilling and so are things with her on-again, off-again boyfriend. But when she hears that her estranged mother, Juliet, has been seriously injured in a car accident, Liv has no choice but to pack up her life and head home to beautiful Cape Sanctuary on the Northern California coast.

It’s just for a few months—that’s what Liv keeps telling herself. But the closer she gets to Cape Sanctuary, the painful memories start flooding back: Natalie, her vibrant, passionate older sister who downward-spiraled into addiction. The fights with her mother who enabled her sister at every turn. The overdose that took Natalie, leaving her now-teenaged daughter, Caitlin, an orphan.

As Liv tries to balance her own needs with those of her injured mother and an obstinate, resentful fifteen-year-old, it becomes clear that all three Harper women have been keeping heartbreaking secrets from one another. And as those secrets are revealed, Liv, Juliet, and Caitlin will see that it’s never too late—or too early—to heal family wounds and find forgiveness.

Sunrise on Half Moon Bay by Robyn Carr

Adele and Justine have never been close. Born twenty years apart, Justine was already an adult when Addie was born. The sisters love each other but they don’t really know each other.

When Addie dropped out of university to care for their ailing parents, Justine, a successful lawyer, covered the expenses. It was the best arrangement at the time but now that their parents are gone, the future has changed dramatically for both women.

Addie had great plans for her life but has been worn down by the pressures of being a caregiver and doesn’t know how to live for herself. And Justine’s success has come at a price. Her marriage is falling apart despite her best efforts.

Neither woman knows how to start life over but both realize they can and must support each other the way only sisters can. Together they find the strength to accept their failures and overcome their challenges. Happiness is within reach, if only they have the courage to fight for it.

Set in the stunning coastal town of Half Moon Bay, California, Robyn Carr’s new novel examines the joys of sisterhood and the importance of embracing change.

The Library of Lost and Found by Phaedra Patrick

Librarian Martha Storm has always found it easier to connect with books than people—though not for lack of trying. She keeps careful lists of how to help others in her superhero-themed notebook. And yet, sometimes it feels like she’s invisible.

All of that changes when a book of fairy tales arrives on her doorstep. Inside, Martha finds a dedication written to her by her best friend—her grandmother Zelda—who died under mysterious circumstances years earlier. When Martha discovers a clue within the book that her grandmother may still be alive, she becomes determined to discover the truth. As she delves deeper into Zelda’s past, she unwittingly reveals a family secret that will change her life forever.

Filled with Phaedra Patrick’s signature charm and vivid characters, The Library of Lost and Found is a heartwarming and poignant tale of how one woman must take control of her destiny to write her own happy ending.

The Little Bookshop on the Seine by Rebecca Raisin

It’s The Holiday on the Champs-Élysées in a great big love letter to Paris, charming old bookstores and happily-ever-afters!

When bookshop owner Sarah Smith is offered the opportunity for a job exchange with her Parisian friend Sophie, saying yes is a no-brainer—after all, what kind of romantic would turn down six months in Paris? Sarah is sure she’s in for the experience of a lifetime—days spent surrounded by literature in a gorgeous bookshop, and the chance to watch the snow fall on the Eiffel Tower. Plus, now she can meet up with her journalist boyfriend, Ridge, when his job takes him around the globe.

But her expectations cool faster than her café au lait soon after she lands in the City of Light—she’s a fish out of water in Paris. The customers are rude, her new coworkers suspicious and her relationship with Ridge has been reduced to a long-distance game of phone tag, leaving Sarah to wonder if he’ll ever put her first over his busy career. As Christmas approaches, Sarah is determined to get the shop—and her life—back in order…and make her dreams of a Parisian happily-ever-after come true.

Is there a book you revisit whenever you’re feeling down? For me, it’s the Harry Potter and the Philosopher’s Stone…there’s something so sweet and nostalgic about it. Let us know in the comments below!