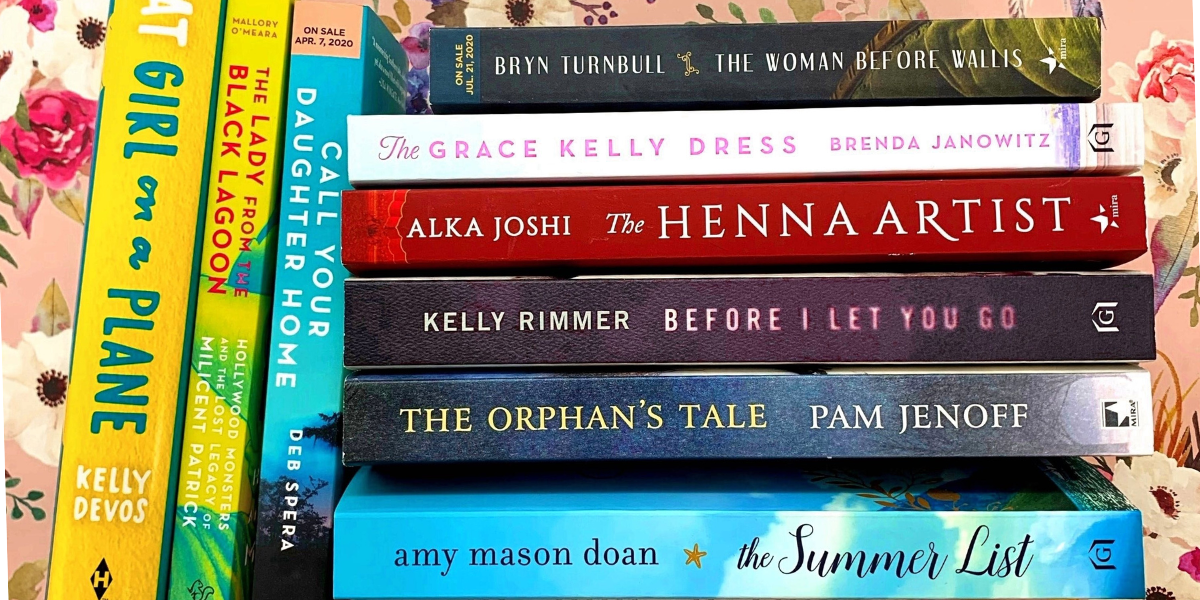 We love reading about female characters that embody everything a strong woman does. Passionate, fierce and fearless, the heroines in these books are a force to be reckoned with! From a seventeen-year-old girl escaping an arranged and abusive marriage to a woman who broke the glass ceiling in animation and monster-making, you’re going to get empowered by these amazing female leads in these reads.

Escaping from an arranged and abusive marriage, seventeen-year-old Lakshmi makes her way alone from her 1950s rural village to the vibrant pink city of Jaipur. There she becomes the henna artist—and confidante—most in demand to the wealthy women of the upper class. But trusted with the secrets of the wealthy, she can never reveal her own…

The Lady from the Black Lagoon by Mallory O’Meara

As a teenager, Mallory O’Meara was thrilled to discover that one of her favorite movies, Creature from the Black Lagoon, featured a monster designed by a woman, Milicent Patrick. But for someone who should have been hailed as a pioneer in the genre, there was little information available. For, as O’Meara soon discovered, Patrick’s contribution had been claimed by a jealous male colleague, her career had been cut short and she soon after had disappeared from film history. No one even knew if she was still alive.

As a young woman working in the horror film industry, O’Meara set out to right the wrong, and in the process discovered the full, fascinating story of an ambitious, artistic woman ahead of her time. Patrick’s contribution to special effects proved to be just the latest chapter in a remarkable, unconventional life, from her youth growing up in the shadow of Hearst Castle, to her career as one of Disney’s first female animators. And at last, O’Meara discovered what really had happened to Patrick after The Creature’s success, and where she went.

A true-life detective story and a celebration of a forgotten feminist trailblazer, Mallory O’Meara’s The Lady from the Black Lagoon establishes Patrick in her rightful place in film history while calling out a Hollywood culture where little has changed since.

Fat Girl on a Plane by Kelly DeVos

Cookie Vonn’s dreams include getting out of Phoenix and becoming the next great fashion designer. But in the world of fashion, being fat is a cardinal sin. It doesn’t help that she’s constantly compared to her supermodel mother—and named after a dessert.

Cookie scores a trip to New York to pitch her design portfolio, but her plans are put on standby when she’s declared too fat to fly. When she finally arrives, she finds she’s been replaced by her ultrathin rival. Cookie vows to lose weight, get out of the friend zone with her crush, and put her dreams back on track.

Cookie expected sunshine and rainbows, but nothing about her new life is turning out like she planned. When the fashion designer of the moment offers her what she’s always wanted—an opportunity to live and study in New York—she finds herself in a world full of people more interested in putting women down than dressing them up. Her designs make waves, but her real dream of creating great clothes for people of all sizes seems to grow more distant by the day.

Will she realize that she’s always had the power to make her own dreams come true?

The Orphan’s Tale by Pam Jenoff

From the New York Times bestselling author of The Lost Girls of Paris.

A powerful novel of friendship set in a traveling circus during World War II, The Orphan’s Tale introduces two extraordinary women and their harrowing stories of sacrifice and survival

Sixteen-year-old Noa has been cast out in disgrace after becoming pregnant by a Nazi soldier and being forced to give up her baby. She lives above a small rail station, which she cleans in order to earn her keep… When Noa discovers a boxcar containing dozens of Jewish infants bound for a concentration camp, she is reminded of the child that was taken from her. And in a moment that will change the course of her life, she snatches one of the babies and flees into the snowy night.

Noa finds refuge with a German circus, but she must learn the flying trapeze act so she can blend in undetected, spurning the resentment of the lead aerialist, Astrid. At first rivals, Noa and Astrid soon forge a powerful bond. But as the facade that protects them proves increasingly tenuous, Noa and Astrid must decide whether their friendship is enough to save one another—or if the secrets that burn between them will destroy everything.

Before I Let You Go by Kelly Rimmer

From the author of Truths I Never Told You and The Things We Cannot Say, Before I Let You Go explores a hotly divisive topic and asks how far the ties of family love can be stretched before they finally break.

The 2:00 a.m. call is the first time Lexie Vidler has heard her sister’s voice in years. Annie is a drug addict, a thief, a liar—and in trouble, again. Lexie has always bailed Annie out, given her money, a place to sleep, sent her to every kind of rehab. But this time, she’s not just strung out—she’s pregnant and in premature labor. If she goes to the hospital, she’ll lose custody of her baby—maybe even go to prison. But the alternative is unthinkable.

As the weeks unfold, Lexie finds herself caring for her fragile newborn niece while her carefully ordered life is collapsing around her. She’s in danger of losing her job, and her fiancé only has so much patience for Annie’s drama. In court-ordered rehab, Annie attempts to halt her downward spiral by confronting long-buried secrets from the sisters’ childhoods, ghosts that Lexie doesn’t want to face. But will the journey heal Annie, or lead her down a darker path?

But the past is impossible to escape, and now, after seventeen years away, Laura is pulled home and into a reunion with Casey she can’t resist—one last scavenger hunt. With a twist: this time, the list of clues leads to the settings of their most cherished summer memories. From glistening Jade Cove to the vintage skating rink, each step they take becomes a bittersweet reminder of the friendship they once shared. But just as the game brings Laura and Casey back together, the clues unravel a stunning secret that threatens to tear them apart…

Who has been the most inspiring female character you’ve read about recently? Share them with us!