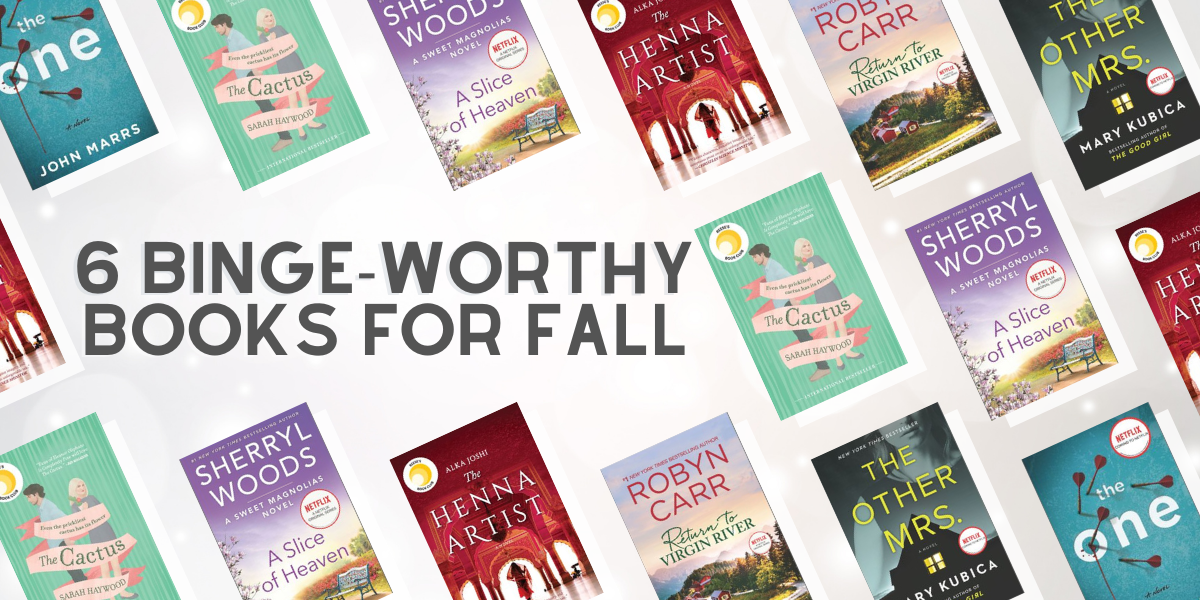 While we’ve been saying goodbye to warm weather, we’ve been saying hello to a lot of books and entertainment as a whole. There really never is enough to read or watch…even when it comes to Netflix series. Looking for some new inspiration? Pick up a pumpkin spice latte and settle in with these six binge-worthy reads.

#1 New York Times bestselling author Robyn Carr returns to the beloved town of Virgin River with a brand-new story about fresh starts, new friends and the magic of Christmas.

A Slice of Heaven by Sherryl Woods

The Sweet Magnolias is now a Netflix Original Series!

Return to the world of the Sweet Magnolias, where friends are closer than family, and fun and scandal are always part of the mix.

Ever since she discovered her ex-husband’s affair, Dana Sue Sullivan decided to put down new roots and create the best restaurant in Serenity, South Carolina. After years of hard labor, her dream has become a reality. Sullivan’s provides more than just Southern comfort food—it’s become a haven for the whole town—and Dana Sue knows better than anyone that relying on friendship can get you through the toughest times.

But when her teenage daughter, Annie, develops an eating disorder that lands her in the hospital, Dana Sue’s perfect life comes crumbling down. On top of it all, her own health starts to deteriorate. Dana Sue knows she needs to change habits now to help them both get better—even if that means letting Ronnie Sullivan back into their lives.

And who knows, his return might end up being a recipe for a new beginning…

How far would you go to find The One?

A simple DNA test is all it takes—just a quick mouth swab, and soon you’ll be paired with your perfect partner. At least, that was the promise made when scientists found the gene that can determine your ideal match.

“A shock on every other page.” —Wall Street Journal

But the discovery has its downsides: test results have led to countless breakups and changed the traditional ideas of dating, romance and love.

“A dark thriller for the Valentine’s Day skeptic.’’ —The New York Post

Now five very different people have received their match. But “happily-ever-after” isn’t guaranteed for everyone, because even soul mates have secrets. And some are more shocking than others…

“Just try to put this gripping thriller down once you pick it up.’’ —AARP

The Cactus by Sarah Haywood

In this charming and poignant debut, one woman’s unconventional journey to finding love means learning to embrace the unexpected.

For Susan Green, messy emotions don’t fit into the equation of her perfectly ordered life. She has a flat that is ideal for one, a job that suits her passion for logic, and an “interpersonal arrangement” that provides cultural and other, more intimate, benefits. But suddenly confronted with the loss of her mother and the news that she is about to become a mother herself, Susan’s greatest fear is realized. She is losing control.

Enter Rob, the dubious but well-meaning friend of her indolent brother. As Susan’s due date draws near and her dismantled world falls further into a tailspin, Susan finds an unlikely ally in Rob. She might have a chance at finding real love and learning to love herself, if only she can figure out how to let go.

Have any of these books made it on your TBR list? Let us know in the comments below.

One thought on “6 Binge-Worthy Books for Fall”