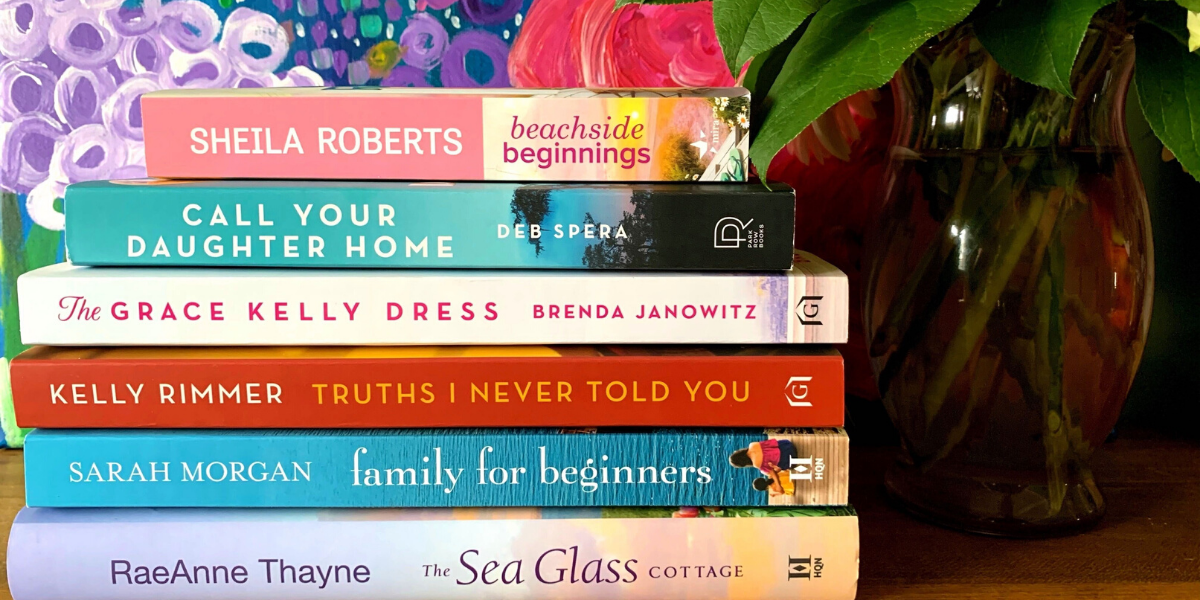 Moms, this one’s for you! With all the curve balls you’ve been thrown this year, you deserve a little (read: a lot) of R&R. Throw in another R (reading!) with these amazing books by inspiring female authors like Kelly Rimmer, Sarah Morgan and Sheila Roberts.

Truths I Never Told You by Kelly Rimmer

From the bestselling author of The Things We Cannot Say comes a poignant post-WWII novel that explores the expectations society places on women set within an engrossing family mystery that may unravel everything once believed to be true.

With her father recently moved to a care facility, Beth Walsh volunteers to clear out the family home and is surprised to discover the door to her childhood playroom padlocked. She’s even more shocked at what’s behind it—a hoarder’s mess of her father’s paintings, mounds of discarded papers and miscellaneous junk in the otherwise fastidiously tidy house.

As she picks through the clutter, she finds a loose journal entry in what appears to be her late mother’s handwriting. Beth and her siblings grew up believing their mother died in a car accident when they were little more than toddlers, but this note suggests something much darker.

Beth soon pieces together a disturbing portrait of a woman suffering from postpartum depression and a husband who bears little resemblance to the loving father Beth and her siblings know. With a newborn of her own and struggling with motherhood, Beth finds there may be more tying her and her mother together than she ever suspected.

Family for Beginners by Sarah Morgan

USA TODAY bestselling author Sarah Morgan returns with a life-affirming exploration of love, loss, and how families come in all shapes and sizes…

New York florist Flora Donovan is living the dream, but her bubbly optimism hides a secret. She’s lonely. Orphaned as a child, she’s never felt like she’s belonged anywhere…until she meets Jack Parker. He’s the first man to ever really see her, and it’s life changing.

Teenager Izzy Parker is holding it together by her fingertips. Since her mother passed away a year ago, looking after her dad and little sister is the only thing that makes Izzy feel safe. Discovering her father has a new girlfriend is her worst nightmare—she is not in the market for a replacement mom. Then her father invites Flora on their summer vacation…

Flora’s heart aches for Izzy, but she badly wants her relationship with Jack to work. As the summer unfolds, Flora must push her own boundaries to discover parts of herself she never knew existed—and to find the family she’s always wanted.

The life Olivia Harper always dreamed of isn’t so dreamy these days. The 16-hour work days are unfulfilling and so are things with her on-again, off-again boyfriend. But when she hears that her estranged mother, Juliet, has been seriously injured in a car accident, Liv has no choice but to pack up her life and head home to beautiful Cape Sanctuary on the Northern California coast.

It’s just for a few months—that’s what Liv keeps telling herself. But the closer she gets to Cape Sanctuary, the painful memories start flooding back: Natalie, her vibrant, passionate older sister who downward-spiraled into addiction. The fights with her mother who enabled her sister at every turn. The overdose that took Natalie, leaving her now-teenaged daughter, Caitlin, an orphan.

As Liv tries to balance her own needs with those of her injured mother and an obstinate, resentful fifteen-year-old, it becomes clear that all three Harper women have been keeping heartbreaking secrets from one another. And as those secrets are revealed, Liv, Juliet, and Caitlin will see that it’s never too late—or too early—to heal family wounds and find forgiveness.

Moira Wellman has always loved makeovers—helping women find their most beautiful selves. Funny how it’s taken her five years with her abusive boyfriend, Lang, to realize she needs a life makeover. When Moira finally gets the courage to leave Lang, the beachside town of Moonlight Harbor is the perfect place to start over.

Soon Moira is right at home, working at Waves Salon, making new friends and helping her clients find new confidence. When she meets a handsome police officer, she’s more than willing to give him a free haircut. Maybe even her heart. But is she really ready for romance after Lang? And what if her new friend is in hot pursuit of that same cop? This is worse than a bad perm.

With all the heart and humor readers have come to expect from a Sheila Roberts novel, Beachside Beginnings is the story of one woman finding the courage to live her best life. And where better to live it than at the beach?

What’s your perfect Mother’s Day read? Let us know in the comments below!