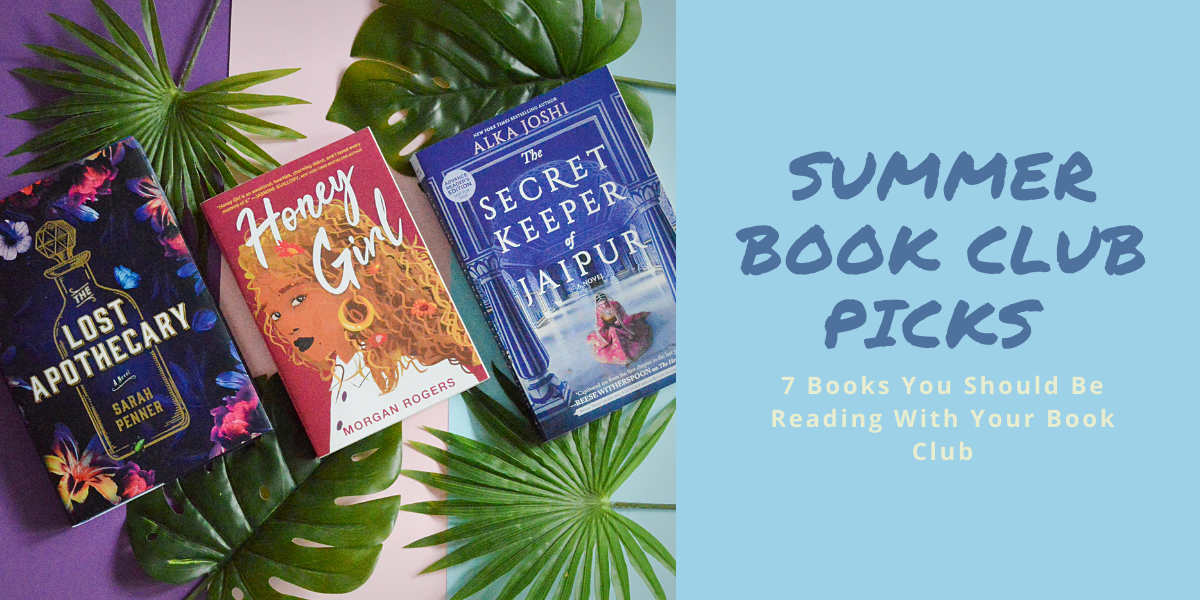 One thing we’re looking forward to this season is all the summer reads! We’ve found some your book club’s sure to love regardless of which genres they like. Captivating characters, sensational stories and amazing authors round out this list. Trust us: your summer is going to be booked with these book club picks!

The Secret Keeper of Jaipur by Alka Joshi

A NEW NOVEL BY THE AUTHOR OF THE HENNA ARTIST,  A REESE’S BOOK CLUB PICK

“Fans of Crossing California and Daisy Jones and the Six will be enamored with the world of Lady Sunshine.” —Booklist

ONE ICONIC FAMILY. ONE SUMMER OF SECRETS. THE DAZZLING SPIRIT OF 1970S CALIFORNIA.

For Jackie Pierce, everything changed the summer of 1979, when she spent three months of infinite freedom at her bohemian uncle’s sprawling estate on the California coast. As musicians, artists, and free spirits gathered at The Sandcastle for the season in pursuit of inspiration and communal living, Jackie and her cousin Willa fell into a fast friendship, testing their limits along the rocky beach and in the wild woods… until the summer abruptly ended in tragedy, and Willa silently slipped away into the night.

Twenty years later, Jackie unexpectedly inherits The Sandcastle and returns to the iconic estate for a short visit to ready it for sale. But she reluctantly extends her stay when she learns that, before her death, her estranged aunt had promised an up-and-coming producer he could record a tribute album to her late uncle at the property’s studio. As her musical guests bring the place to life again with their sun-drenched beach days and late-night bonfires, Jackie begins to notice startling parallels to that summer long ago. And when a piece of the past resurfaces and sparks new questions about Willa’s disappearance, Jackie must discover if the dark secret she’s kept ever since is even the truth at all.

With its rich history and famous guests, the glamorous Boston hotel is no stranger to drama. But the bustle at the iconic property reaches new heights one weekend in mid-June when someone falls tragically to her death, the event rippling through the lives of four very different people.

Bride-to-be Riley is at the hotel to plan her wedding. She would have preferred a smaller, more intimate celebration, but her bossy mother-in-law has taken charge and her fiancé hasn’t seemed to notice. Jean-Paul, the hotel’s manager, is struggling to keep his marriage and new family afloat, but now he must devote all his energy to this latest scandal at work. Claire, recently widowed, comes to town to connect with a long-lost love, but has too much changed in the last thirty years?  And then there’s Jason, whose romantic getaway with his girlfriend has not exactly gone the way he’d hoped and instead has him facing questions he can’t bring himself to answer.

Over three sun-drenched days, as the truth about the woman who died—and the secret she was hiding—is uncovered, these four strangers become linked in the most unexpected of ways. Together, they just might find the strength they need to turn their own lives around.

What books do you think your book club will be reading this summer? Let us know in the comments below. And don’t forget to check out all of our must-read summer picks for some more recommendations!