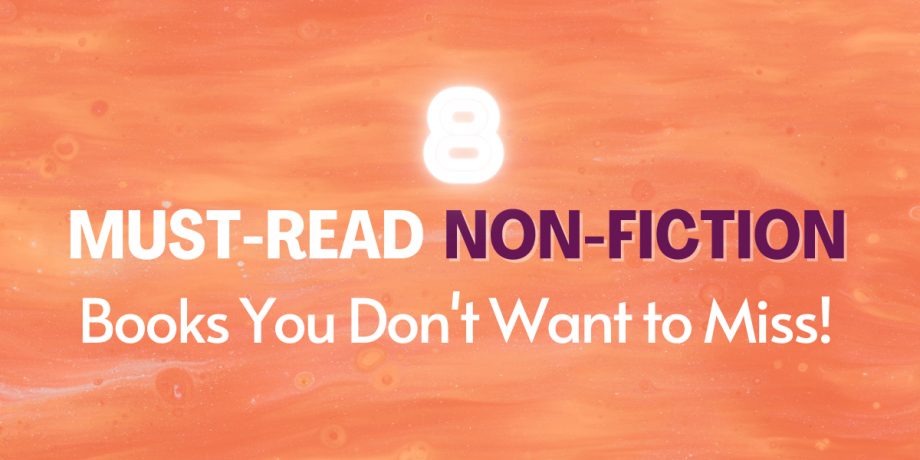 Non-Fiction books hold a special place in our hearts, so we are so excited to share this incredible list of reads, and this is only a handful! If these aren’t on your TBR list, they need to be 😍.

The Love You Save by Goldie Taylor

Acclaimed journalist and human rights activist Goldie Taylor shares the harrowing yet deeply hopeful story of her troubled childhood in East St. Louis—a memoir of family, faith and the power of books

At age eleven, Goldie Taylor is out riding her new bike when a young man from the neighborhood brutally rapes her. Goldie’s mother, dealing with trauma of her own, sends her to live with her aunt, uprooting her from a good school to live in a dangerous, bottomed-out neighborhood in East St. Louis.

Aunt Gerald takes in anyone who asks, but the conditions are harsh. With no bed or personal belongings, Goldie sleeps on the living room floor, beneath a threadbare blanket, amid cousins who abuse her. Plagued by the echoes of trauma and longing for her mother, Goldie finds her thoughts growing increasingly dark. Until she finds solace in the writings of James Baldwin. And hope in the form of a nurturing teacher who helps her find her voice.

With echoes of Maya Angelou’s I Know Why the Caged BirdSings and Tara Westover’s Educated, Goldie Taylor’s debut memoir shines a light on the strictures of race, class and gender in a post–Jim Crow America while offering a nuanced, empathetic portrait of a family in a pitched battle for its very soul. Profoundly moving, exquisitely rendered and ultimately uplifting, The Love You Save is a story about hidden strength, perseverance against unimaginable odds, the beauty and pain of girlhood, and the power of the written word.

Strung Out by Erin Khar

In this deeply personal and illuminating memoir about her fifteen-year struggle with heroin, Khar sheds profound light on the opioid crisis and gives a voice to the over two million people in America currently battling with this addiction.

Growing up in LA, Erin Khar hid behind a picture-perfect childhood filled with excellent grades, a popular group of friends and horseback riding. After first experimenting with her grandmother’s expired painkillers, Khar started using heroin when she was thirteen. The drug allowed her to escape from pressures to be perfect and suppress all the heavy feelings she couldn’t understand.

This fiercely honest memoir explores how heroin shaped every aspect of her life for the next fifteen years and details the various lies she told herself, and others, about her drug use. With enormous heart and wisdom, she shows how the shame and stigma surrounding addiction, which fuels denial and deceit, is so often what keeps addicts from getting help. There is no one path to recovery, and for Khar, it was in motherhood that she found the inner strength and self-forgiveness to quit heroin and fight for her life.

Strung Out is a life-affirming story of resilience while also a gripping investigation into the psychology of addiction and why people turn to opioids in the first place.

Part memoir, part expert analysis, Disasterology is a passionate and personal account of a country in crisis—one unprepared to deal with the disasters of today and those looming in our future.

With temperatures rising and the risk of disasters growing, our world is increasingly vulnerable. Most people see disasters as freak, natural events that are unpredictable and unpreventable. But that simply isn’t the case – disasters are avoidable, but when they do strike, there are strategic ways to manage the fallout.

InDisasterology, Dr. Montano, a disaster researcher, brings readers with her on an eye-opening journey through some of our worst disasters, helping readers make sense of what really happened from a emergency management perspective. She explains why we aren’t doing enough to prevent or prepare for disasters, the critical role of media, and how our approach to recovery was not designed to serve marginalized communities. Now that climate change is contributing to the disruption of ecosystems and worsening disasters, Dr. Montano offers a preview of what will happen to our communities if we don’t take aggressive, immediate action. In a section devoted to the COVID-19 pandemic, what is thus far our generation’s most deadly disaster, she casts light on the many decisions made behind closed doors that failed to protect the public.

A deeply moving and timely narrative that draws on Dr. Montano’s first-hand experience in emergency management, Disasterology is essential reading for anyone who wants to understand how our country handles disasters, and how we can better face them together.

A groundbreaking account of New York’s Fire Island, chronicling its influence on art, literature, culture and queer liberation over the past century

Fire Island, a thin strip of beach off the Long Island coast, has long been a vital space in the queer history of America. Both utopian and exclusionary, healing and destructive, the island is a locus of contradictions, all of which coalesce against a stunning ocean backdrop.

Now, poet and scholar Jack Parlett tells the story of this iconic destination—its history, its meaning and its cultural significance—told through the lens of the artists and creators who sought refuge on its shores. Together, figures as divergent as Walt Whitman, Oscar Wilde, James Baldwin, Carson McCullers, Frank O’Hara, Patricia Highsmith and Jeremy O. Harris tell the story of a queer space in constant evolution.

Transporting, impeccably researched and gorgeously written, Fire Island is the definitive book on an iconic American destination and an essential contribution to queer history.

An electrifying debut memoir of a pastor’s son chronicling his loss of faith, his addiction to heroin and our universal quest to find something to believe in

Matt Rowland Hill had two great loves in his life: Jesus and heroin. The son of an evangelical minister, Hill grew up with an unwavering devotion to the tenets of his parents’ Baptist church. But by high school, he began to experience a crisis of faith. To fill the void, he turned to literature, and then to heroin and cocaine. By his twenties, Hill’s substance abuse escalated into a full-on addiction. As he grew increasingly suicidal, he knew he had to come to terms with both religion and drugs to survive.

Hill’s debut is an extraordinary, gorgeously crafted memoir of faith, family, loss, shame and addiction. But ultimately, Original Sins is a raw portrait of survival—of growing up and learning how to live.

The Biggest Edition – Revised and Expanded with All New Chapters

Rick Ross is a hip-hop icon and a towering figure in the business world, but his path to success was not always easy. Despite adversity and setbacks, Ross held tight to his vision and never settled for anything less than greatness. Now, for the first time, he shares his secrets to success, offering his own life as a road map to readers looking to build their own empire. Along the way he reveals:

As Ross explains, “It doesn’t matter what’s going on. Even the most dire situation is just another opportunity to boss up.”Intimate, insightful and brimming with no-nonsense advice, The Perfect Time to Boss Up is the ideal book for hustlers everywhere.

Available in paperback at:

The definitive biography of Charles Barkley, exploring his early childhood, his storied NBA career, and his enduring legacy as a provocative voice in American pop culture

He’s one of the most interesting American athletes in the past fifty years. Passionate, candid, iconoclastic, and gifted both on and off the court, Charles Barkley has made a lasting impact on not only the world of basketball but pop culture at large.

Yet few people know the real Charles. Raised by his mother and grandmother in Leeds, Alabama, he struggled in his early years to fit in until he found a sense of community and purpose in basketball. In the NBA he went toe-to-toe with the biggest legends in the game, from Magic to Michael to Hakeem to Shaq. But in the years since, he has become a bold agitator for social change, unafraid to grapple, often brashly, with even the thorniest of cultural issues facing our nation today.

Informed by over 370 original interviews and painstaking research, Timothy Bella’s Barkley is the most comprehensive biography to date of one of the most talked-about icons in the world of sports.

A groundbreaking reappraisal of medieval femininity, revealing why women have been written out of history and why it matters

The Middle Ages are seen as a bloodthirsty time of Vikings, saints and kings: a patriarchal society that oppressed and excluded women. But when we dig a little deeper into the truth, we can see that the “Dark” Ages were anything but.

Oxford and BBC historian Janina Ramirez has uncovered countless influential women’s names struck out of historical records, with the word FEMINA annotated beside them. As gatekeepers of the past ordered books to be burned, artworks to be destroyed, and new versions of myths, legends and historical documents to be produced, our view of history has been manipulated.

Only now, through a careful examination of the artifacts, writings and possessions they left behind, are the influential and multifaceted lives of women emerging. Femina goes beyond the official records to uncover the true impact of women, such as:

In Femina, Ramirez invites us to see the medieval world with fresh eyes and discover why these remarkable women were removed from our collective memories.