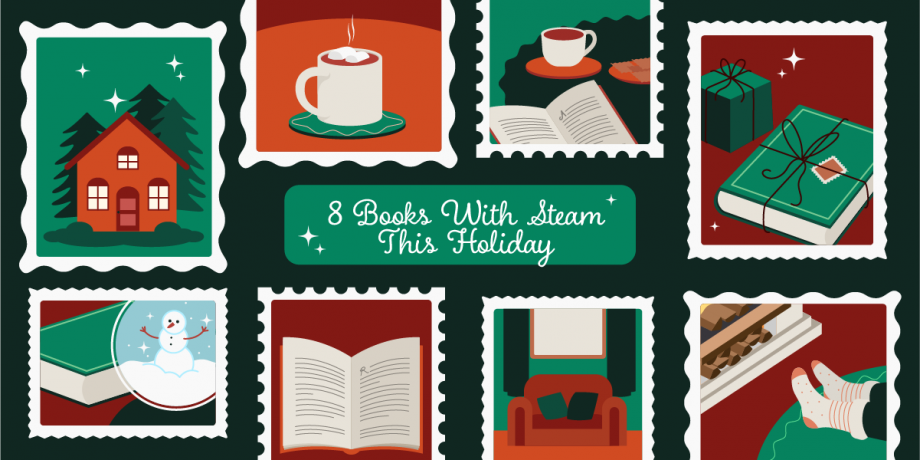 It’s winter: it’s cold and it’s blustery, so is there anything better than cozying up on the couch with a good book? Well, only if that book has some heat to it as well 😏. Oh the weather outside is frightful, but the fire is oh so delightful. 🌶

Keep the heat going this holiday season with these 8 spicy reads! Gift them to a friend, or keep them for yourself, we encourage both. Happy reading, friends! 🥵

For Butter or Worse by Erin La Rosa

All chef Nina Lyon wants is to make a name for herself in the culinary world and inspire young women everywhere to do the same. For too long, she’s been held back and underestimated by the male-dominated sphere of professional kitchens, and she’s had enough. Now, as co-host of the competitive reality TV series The Next Cooking Champ!, she finally has a real shot at being top tier in the foodie scene.
Too bad her co-host happens to be Hollywood’s smarmiest jerk.

Restaurateur Leo O’Donnell never means to get under Nina’s skin. It just seems to happen, especially when the cameras are rolling. It’s part of the anxiety and stress he has come to know all too well in this line of work. So nothing prepares him for the fallout after he takes one joke a smidge too far and Nina up and quits—on live TV.

To make matters worse, the two are caught in what looks like a compromising situation by the paparazzi…and fans of the show go absolutely nuts. Turns out, a “secret romance” between Nina and Leo may just be what their careers need most.

Now all they have to do is play along, without killing each other…and without catching feelings. Easy as artisanal shepherd’s pie. Right?

“This feel-good, empowering rom-com will blow you away, guaranteed.” —Sarah Smith, author of Simmer Down

A delicious debut rom-com about a plus-size sweetheart who gets a full-life makeover after a brutal breakup.

Savvy Sheldon spends a lot of time tiptoeing around the cracks in her life: her high-stress and low-thanks job, her clueless boyfriend and the falling-apart kitchen she inherited from her beloved grandma—who taught her how to cook and how to love people by feeding them. But when Savvy’s world starts to crash down around her, she knows it’s time for some renovations.

Starting from the outside in, Savvy tackles her crumbling kitchen, her relationship with her body, her work–life balance (or lack thereof) and, last but not least, her love life. The only thing that doesn’t seem to require effort is her ride-or-die squad of friends. But as any home-reno-show junkie can tell you, something always falls apart during renovations. First, Savvy passes out during hot yoga. Then it turns out that the contractor she hires is the same sexy stranger she unintentionally offended by judging based on appearances. Worst of all, Savvy can’t seem to go anywhere without tripping over her ex and his latest “upgrade.” Savvy begins to realize that maybe she should’ve started her renovations the other way around: beginning with how she sees herself before building a love that lasts.

Here For the Drama by Kate Bromley

It wouldn’t be the theater without a few theatrics…

Becoming a famous playwright is all Winnie ever dreamed about. For now, though, she’ll have to settle for assisting the celebrated, sharp-witted feminist playwright Juliette Brassard. When an experimental theater company in London, England, decides to stage Juliette’s most renowned play, The Lights of Trafalgar, Winnie and Juliette pack their bags and hop across the pond.

But the trip goes sideways faster than you can say “tea and crumpets.” Juliette stubbornly butts heads with the play’s director and Winnie is left stage-managing their relationship. Meanwhile, Winnie’s own work seems to have stalled, and though Juliette keeps promising to read it, she always has some vague reason why she can’t. Then, Juliette’s nephew, Liam, enters stage left. He’s handsome, he’s smart, he is devastatingly British…and his family ties to Juliette pose a serious problem, forcing Winnie to keep their burgeoning relationship on the down-low. What could go wrong?

Balancing a production seemingly headed for disaster, a secret romance and the sweetest, most rambunctious rescue dog, will Winnie save the play, make her own dreams come true and find love along the way—or will the slings and arrows of outrageous fortune get the best of her?

Ben and Beatriz by Katalina Gamarra

Beatriz Herrera is a fierce woman who will take you down with her quick wit and keen intellect. And after the results of the 2016 election worked hard to erase her identity as a queer biracial woman, she’d be right to. Especially if you come for her sweet BFF cousin, Hero. Beatriz would do anything for her, a loyalty that lands Beatriz precisely where she doesn’t want to be: spending a week at the ridiculous Cape Cod mansion of stupid-hot playboy Ben Montgomery. The same Ben Montgomery she definitely shouldn’t have hooked up with that one time… The things we do for family.

White and wealthy, Ben talks the talk and walks the walk of privilege, but deep down, he’s wrestling with the politics and expectations of a conservative family he can’t relate to. Though Beatriz’s caustic tongue drives him wild in the very best way, he’s the last person she’d want, because she has zero interest in compromising her identity. But as her and Ben’s assumptions begin to unravel and their hookups turn into something real, they start wondering if it’s still possible to hold space for one another and the inescapable love that unites them.

This retelling of Shakespeare’s Much Ado About Nothing is both razor-sharp and swoon-worthy: the perfect love story for our time.