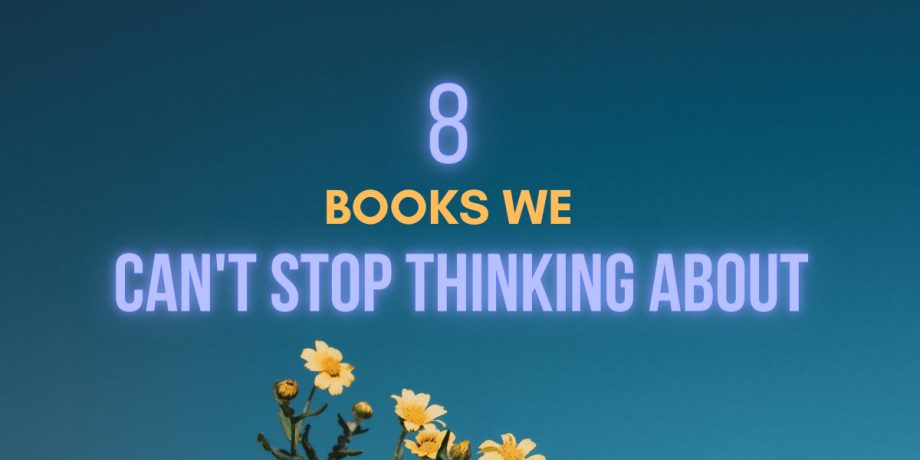 Whether these books are still sitting on your TBR or if they aren’t on your radar yet, run, don’t walk to the nearest bookstore and snatch them up! We still can’t stop thinking about these reads! We finished these titles a few weeks ago and…is it too early to reread them? Asking for a friend…

The Two Lives of Sara by Catherine Adel West

A young mother finds refuge and friendship at a boardinghouse in 1960s Memphis, Tennessee, where family encompasses more than just blood and hidden truths can bury you or set you free.

Sara King has nothing, save for her secrets and the baby in her belly, as she boards the bus to Memphis, hoping to outrun her past in Chicago. She is welcomed with open arms by Mama Sugar, a kindly matriarch and owner of the popular boardinghouse The Scarlet Poplar.

Like many cities in early 1960s America, Memphis is still segregated, but change is in the air. News spreads of the Freedom Riders. Across the country, people like Martin Luther King Jr. are leading the fight for equal rights. Black literature and music provide the stories and soundtrack for these turbulent and hopeful times, and Sara finds herself drawn in by conversations of education, politics and a brighter tomorrow with Jonas, a local schoolteacher. Romance blooms between them, but secrets from Mama Sugar’s past threaten their newfound happiness with Sara and Jonas soon caught in the crosshairs, leading Sara to make decisions that will reshape the rest of their lives.

With a charismatic cast of characters, The Two Lives of Sara is an emotional and unforgettable story of hope, resilience, and unexpected love.

The Truth About Ben and June by Alex Kiester

A Family Affair by Robyn Carr

Anna McNichol knows how to take charge. Raised by a single mother, she’s worked to ensure her three children have every advantage she didn’t. And while her marriage has its problems, she values commitment and believes in “till death do us part.” Now an empty nester, she’s at the peak of her career and ready to seize the opportunity to focus on her future.

But life can change in an instant, and when her husband dies suddenly, Anna’s carefully constructed world falls apart. The mysterious young woman at the memorial service confirms her husband had been keeping secrets, and Anna is determined to get to the truth.

For once, she doesn’t have the answers. Her kids are struggling with their grief, her mother’s health is in decline and Anna needs closure. Faced with one challenge after another, she finds support from an unexpected source. And as she puts her life back together, Anna realizes the McNichols may not be perfect but they’ll always be family, and family is forever.

Three wives, one letter, and an explosive secret that will change everything.

He said, she said. Who do you believe?

Jessica, Stephanie and Priyanka are complete strangers, but they have one thing in common: they’ve each received a letter accusing their husbands of committing a sexual assault more than two decades prior. Is the accusation true or is there more to the story? It was a secret that remained buried for years.

With their worlds suddenly turned upside down, they don’t know who to trust—a complete stranger or the men they love and built their lives with. The three women come together to embark on a hunt for the truth, but they are hardly prepared for what they will discover. Who is the victim, and will justice ultimately be served?

How do you love a place that doesn’t love you back?

Emmy Quinn is West Texas through and through: her roots run deep in the sleepy small town of Steinbeck, where God sees all and football is king. She loves her community, but she knows that when she comes out as a lesbian, she may not be able to call Steinbeck—which is steeped in the Southern Baptist tradition—home anymore.

After a disastrous conversation with her dad, Emmy meets Cameron, a charismatic, whip-smart grad student from Massachusetts who hates everything Texas. But Texas is in Emmy’s blood. Can she build a future with a woman who can’t accept the things that make Emmy who she is?

Steve Quinn has just been offered his dream job as head coach of the struggling high school football team, the Steinbeck ‘Stangs. The board thinks he can win them a state championship for the first time—but they tell him he can’t accept the position if he’s got any skeletons in his closet. Steve is still wrestling with Emmy’s coming-out: he loves his daughter, but he’s a man of faith, raised in the Baptist community. How can God ask him to choose between his dreams and his own daughter?

This lush, gorgeously written debut is a love letter to the places we call home and asks how we grapple with a complicated love for people and places that might not love us back—at least, not for who we really are. The Golden Season is a powerful examination of faith, queerness and the deep-seated bonds of family, and heralds the arrival of a striking new voice in fiction.