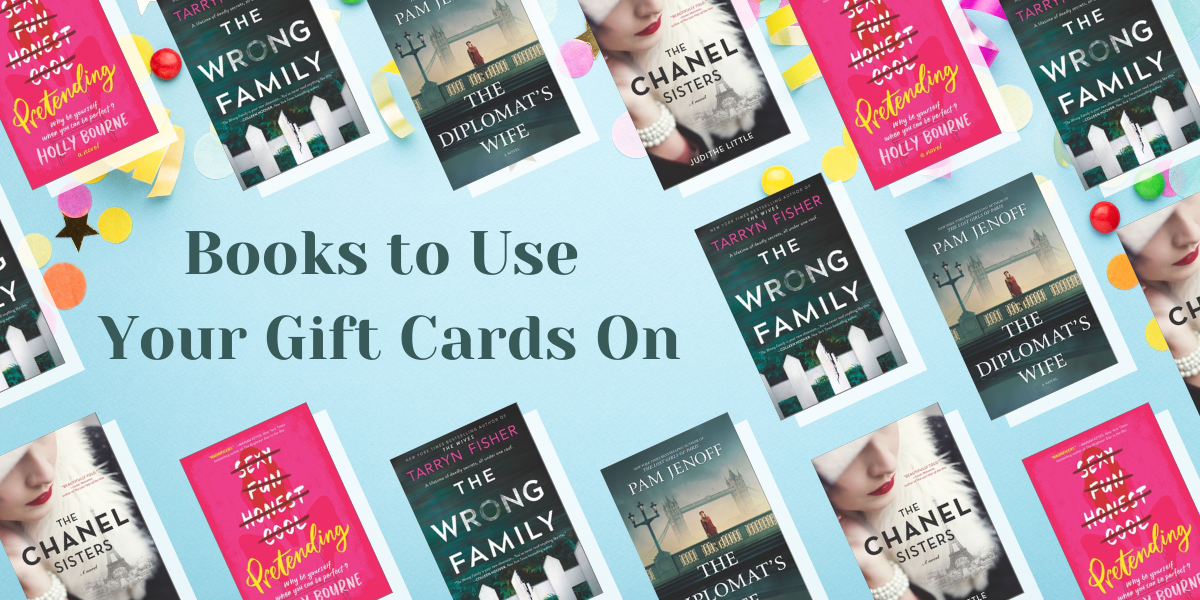 The holidays may be over but that doesn’t mean you should stop treating yourself! Have you gotten a couple of gift cards or money to burn? Spend them wisely with this selection of 9 books featuring some of our favorite new releases and old favorites. Whether you’re a fan of historical fiction, suspense, contemporary fiction, or even nonfiction (like mindfulness or baking!), you’ll love these stellar recommendations.

The Chanel Sisters by Judithe Little

Mindfulness on the Go by Padraig O’Morain

A simple guide for practicing mindfulness in a hectic, fast-moving world, perfect for the spare moments stuck in morning commutes or checkout lines.

You lead a busy life. You’re constantly running between tasks, notebook in one hand, iPhone in the other. You’ve probably heard about the benefits of mindfulness and added “Start doing mindfulness” to your ever-growing to-do list. But frankly, who has time to meditate every day, chant in the lotus position or read long books on finding inner calm?

This brilliant handbook is packed with suggestions for ways to help you slow down, refocus and practice a form of mindfulness that actually fits in with your hectic life. Wherever you’re going, whatever you’re doing, you can make these mindfulness techniques a seamless part of your daily routine, without having to put any special time aside for them—and so feel calmer and less stressed—at work, at home, as a parent, in your relationships or when traveling.

WRONG JOB
Eighteen-year-old Evelyn Jones lands a job in small-town Alaska, working for a man in his isolated mountain home. But her bright hopes for the future are shattered when Donald White disappears, leaving her to face charges of theft, embezzlement—and a brutal double murder. Her protestations of innocence count for nothing. Convicted, she faces life in prison…until fate sends her on the run.

WRONG NAME
Evie’s escape leaves her scarred and in hiding, isolated from her family, working under an alias at a wilderness camp. Bent on justice, intent on recovering her life, she searches for the killer who slaughters without remorse.

WRONG ALIBI
At last, the day comes. Donald White has returned. Evie emerges from hiding; the fugitive becomes the hunter. But in her mind, she hears the whisper of other forces at work. Now Evelyn must untangle the threads of evidence before she’s once again found with blood on her hands: the blood of her own family…

The Girls with No Names by Serena Burdick

The Girls with No Names pulls readers into the gilded age of New York City in the 1910s, when suffragettes marched in the street, unions fought for better work conditions—and girls were confined to the House of Mercy for daring to break the rules.

Home for Unwanted Girls meets The Dollhouse in this atmospheric, heartwarming story that explores not only the historical House of Mercy, but the lives—and secrets—of the girls who stayed there.

The Diplomat’s Wife by Pam Jenoff

One woman faces danger, intrigue, and love in the aftermath of World War II in this unforgettable novel from the New York Times bestselling author of The Lost Girls of Paris.

1945. Marta Nederman has barely survived the brutality of a Nazi concentration camp, where she was imprisoned for her work with the Polish resistance. Lucky to have escaped with her life, she meets Paul, an American soldier, who gives her hope of a happier future. The two make a promise to meet in London, but Paul is in a deadly plane crash and never arrives.

Finding herself pregnant and alone in a strange city, Marta finds comfort with a kind British diplomat, and the two soon marry. But Marta’s happiness is threatened when the British government seeks her help to find a Communist spy—an undercover mission that resurrects the past with far-reaching consequences.

Set during a time of great upheaval and change, The Diplomat’s Wife, a gripping early work from Pam Jenoff, is a story of survival, love and heroism, and a great testament to the strength of women.

He said he was looking for a “partner in crime,” which everyone knows is shorthand for “a woman who isn’t real.”

April is kind, pretty and relatively normal—yet she can’t seem to get past date five. Every time she thinks she’s found someone to trust, they reveal themselves to be awful, leaving her heartbroken. And angry. Until she realizes that men aren’t looking for real women—they’re looking for Gretel.

Gretel is perfect—beautiful but low-maintenance, sweet but never clingy, sexy but not too easy. She’s your regular, everyday Manic-Pixie-Dream-Girl-Next-Door with no problems.

When April starts pretending to be Gretel, dating becomes much more fun—especially once she reels in the unsuspecting Joshua. Finally, April is the one in control. It’s refreshing. Exhilarating, even. But as she and Joshua grow closer, and the pressure of keeping her painful past a secret begins to build, how long will she be able to keep on pretending?

New York’s award-winning bakery Ovenly is world-renowned for their innovative and decadent treats. The Ovenly cookbook is packed with all of their greatest hits—the best ever chocolate-chip cookies, dense, crumbly shortbreads, buttery scones, and more! As self-taught, curious bakers, Agatha Kulaga and Erin Patinkin believe above all that baking (and eating!) should be an adventure. With their use of unexpected flavor combinations by playing with tradition, it’s no wonder Ovenly has a dedicated fanbase.

This updated second edition celebrates Ovenly’s tenth anniversary and includes new recipes of bakeshop favorites such as the ooey-gooey Hot Chocolate Cookie, the tart, moist Vegan Lemon Raspberry Quickbread, the Chewy Molasses Spice Cookie, and fresh twists on some of the bakery’s newer recipes, which are also sure to be classics.

With tips and anecdotes, exquisite photos, and pantry and kitchen tool essentials, Ovenly contains experimental yet perfected recipes for the most inventive and out-of-this-world pastries, desserts, and snacks.

What books are you going to treat yourself to? Let us know in the comments below!