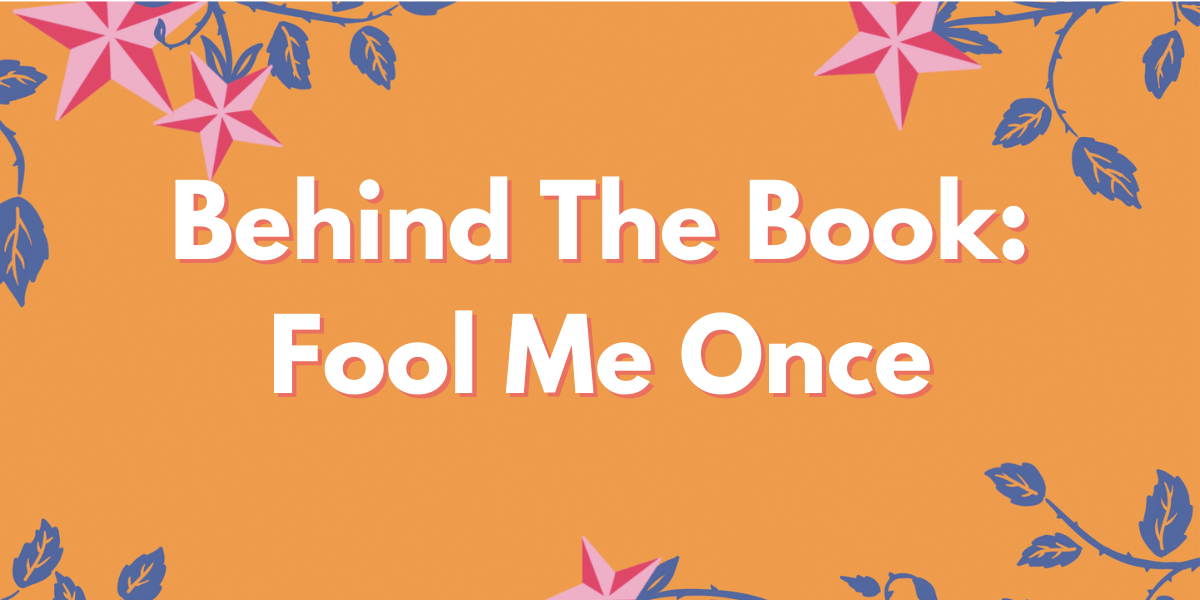 You Are Very Confusing to Readers.

In August 2021 I made my fiction debut with In My Dreams I Hold a Knife, a dark psychological thriller that some readers claimed gave them nightmares, and others called “diabolical.” A few months later, I began to promote my sophomore novel: a highly comedic, highly swoony second-chance romance titled Fool Me Once. Needless to say, the response from many readers was: Hold up. You wrote what? How? When? Why?

All excellent questions. While an increasing number of authors write across genres these days, it’s still unusual enough—particularly this early in an author’s career—to earn some raised eyebrows. So let me shed some light on why my follow-up to dark academia is sunshine love.

Let’s start with a few existential truths. I’ve always identified with this self-burn from F. Scott Fitzgerald: “Writers aren’t people exactly. Or, if they’re any good, they’re a whole lot of people trying so hard to be one person.” Putting aside the obvious implications that are better dissected with my therapist, I think this quote hits a universal truth that we’re all complex and multi-faceted, and writers in particular—if we’re good at what we do—are able to occupy and represent the interiorities of people outside ourselves, sometimes very different people. There’s a certain fluidity of identity required for writing fiction. Without a doubt I myself am composed of several people.

One of them is Todd Cleary from the film Wedding Crashers. When he burst onto screen in his all-black outfit and hunched shoulders, railing at his family for not taking his Dark and Important artistic creations as seriously as they should, it was like looking in a mirror. It’s the Todd in me that reads and writes thrillers, complete with Angsty Artist Scarf.

The other person inside me is Amy Townsend from the film Trainwreck. When hard-partying, my-heart-is-closed-but-my-loins-are-open Amy found herself falling in love for the first time, wanting everything she told herself she didn’t—romance, commitment, heart-melting affection—I saw my own gushy, tender-hearted core. It’s the Amy in me who reads and writes romance.

First, let’s acknowledge that it’s a good thing I’m composed solely of characters from the Judd Apatow-styled R-rated comedy universe, because can you imagine the continuity issues otherwise? Second, I make this joke because you too can probably pinpoint the wildly different characters you relate to. We’re all, readers and writers alike, many people in the guise of one person. For that reason, I think authors writing across genres is more natural and organic than the market would have us believe.

I’ve been a romance reader since childhood, when I used to steal my mother’s Danielle Steel novels while her back was turned, but I first started writing romance in the early days of the pandemic. Things were uncertain, it looked like my husband was going to be trapped outside the country as borders closed, and my inner Todd/thriller writer was doing a lot of paranoid readings of the future. I desperately needed to reframe my relationship to the world—to do a reparative reading, if you will—and there is no genre better at that than romance.

My fellow grad school nerds probably recognize paranoid and reparative readings from the work of esteemed queer theorist Eve Kosofsky Sedgwick, who articulated the two as different approaches one could take to being a literary critic. While paranoid readings, with their hermeneutics of suspicion, have long been the dominant mode of criticism, Sedgwick argued for the value of reparative reading, which doesn’t ignore critiques when approaching literary works, but also searches for what is ennobling, sustaining, and positive, especially by thinking about what that work might do out in the world.

I like to argue that romance offers some of the best reparative readings of the human condition available in literature. When people read contemporary romance, it’s not that they’re trying to escape to live in some unrealistic fantasy (not that there’s anything wrong with that!). Romance, and especially my version of it, doesn’t shy away from grief, pain, messiness, failure, even disaster. No, when readers open a romance novel, they’re doing something very specific and very brave: looking the hard parts of life square in the face and choosing to believe in hope, love, and connection anyway. (That, and looking for idealized significant others to hold over their partners’ heads.) I can tell you, as someone who writes in multiple genres, that it is much harder to look at the gutting things happening in the world and choose to give your energy to love instead of sinking into darkness. (And yes, I know there are people who experience catharsis solely by reading about gruesome things, and more power to these astoundingly metal human beings.)

Romance is a genre that engenders hope and resilience, so it makes sense that it was all I wanted to write in 2020 as the world shuttered, I counted down the days until my debut, and my anxiety and depression spiked.

It’s hard to express the sheer joy of spending every day with Fool Me Once’s main characters. Lee “Stoner” Stone and Ben Laderman are two feisty, competitive, flawed people who were once in love and are now forced to campaign together on a history-making green energy bill. Lee especially is one of my great loves, a woman who in the beginning rejects romantic love in favor of parties, friendships, and one-night stands, and who is, I will admit, very close to a person I used to be. Writing Lee helped me love and come to peace with that version of myself. And beyond the characters, I created a world in which people got second chances to fix what they broke and heal people they hurt, where love won, where politics wasn’t only a vehicle for fear and destruction but also for collective progress (and with the novel set in Texas, this was a very reparative reading). Getting to exist within this framing of positive possibility helped save my mental health.

The truth is, I don’t know if my thriller readers will follow me into romance, or if the romance community will be willing to take a chance on someone with a thriller under her belt, who writes slightly sharp love stories (no murders, though!). There was a solid week where my agent and I assumed that if I sold Fool Me Once, I would publish it under a pen name, and so I went name shopping. Fun but also illuminating: getting the chance to decide your own name tells you a lot about how you see yourself and sheds light on ingrained biases: for example, I found myself leaning toward masculine/androgynous names to be “cooler” and “edgier,” and then had to slap myself for the internalized misogyny. In the end, we decided I was going to remain Ashley Winstead, come what may.

I also don’t know if it was the right decision to debut twice in a row, starting from scratch building a readership, forging author connections, and introducing myself to romance community tastemakers. As any author will tell you, debuting is humbling and emotionally draining work. The whole point of building a brand is so readers know what to expect from you, and look forward to it. Here I’ve gone and blown that up.

While at this point my career does feel like a series of high-risk moves (good job, me), the one thing I am certain of is that I’m doing what feels right: This multi-genre person is who I’ve always been, I needed to write Fool Me Once when I did, and if it brings just one reader the same joy and catharsis it brought me, I will feel successful.

Eve Kosofsky Sedgwick. “Paranoid Reading and Reparative Reading; or, You’re So Paranoid, You Probably Think This Introduction is About You,” Novel Gazing: Queer Readings in Fiction, Duke University Press: 1997.

Fool Me Once by Ashley Winstead

In this fierce and funny battle of the exes, Ashley Winstead’s Fool Me Once explores the chaos of wanting something you used to have.

Lee Stone is a twenty-first-century woman: she kicks butt at her job as a communications director at a women-run electric car company (that’s better than Tesla, thank you), and after work she is “Stoner,” drinking guys under the table and never letting any of them get too comfortable in her bed…

That’s because Lee’s learned one big lesson: never trust love. Four major heartbreaks set her straight, from her father cheating on her mom all the way to Ben Laderman in grad school—who wasn’t actually cheating, but she could have sworn he was, so she reciprocated in kind.

Then Ben shows up five years later, working as a policy expert for the most liberal governor in Texas history, just as Lee is trying to get a clean energy bill rolling. Things get complicated—and competitive—as Lee and Ben are forced to work together. Tension builds just as old sparks reignite, fanning the flames for a romantic dustup the size of Texas.

Have you read In My Dreams I Hold a Knife? Are you going to switch lanes into romcom territory with us?! Let us know in the comments below!