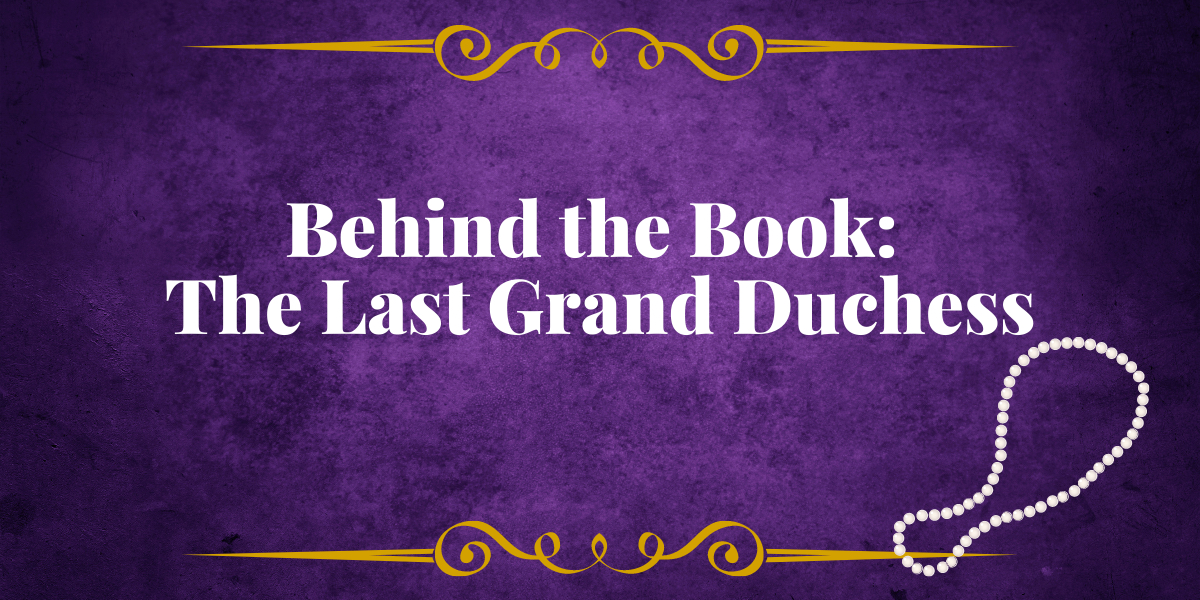 It started, as so many books do, at the end.

I knew the final scene of The Last Grand Duchess before I started writing it. The first words to flow from my pen became my final chapter, Olga’s last thoughts before she meets her tragic fate. It felt like the only way into a story about the Romanovs, really—how else could one approach it, without putting their lives in the context of their shared demise? It’s what has captivated audiences for decades, why their images are so well-known as to be seared on our collective memory: the reclusive monarch and his anxious wife; their sickly son and the mystical healer. Four grand duchesses led down dark cellar steps, their corsets lined with jewels.

That’s what makes it so easy to think of the last Romanovs as symbols: to forget, amidst the unforgettable circumstances of their deaths, the all-too-human realities that governed their lives.

The four daughters of the last Romanovs are most often written about as a collective, with special attention paid to the pretenders of Anastasia, the youngest. But while the girls themselves shared an uncommonly close bond—even referring to themselves as “OTMA,” an amalgamation of their first initials—it felt important, when I started thinking about a book centered on their last days, to consider the young women as individuals. (And lest there be any confusion, I use the term “young women” consciously: though they are often referred to as children, they were between the ages of twenty-three and seventeen at the time of their murder.)

My initial opinion of Olga was formed around images: Pathé newsreels and portrait photography showing a composed, even reserved, young woman who, beneath the heavy weight of ceremonial gowns, resembled her father. Knowing more about her parents—their secretive tendencies and their dependence on Father Grigori Rasputin, both born out of fear for their son and heir Alexei—I expected to find a character who was shy and immature, deferential and anxious about her invalid brother. I questioned, even, whether she had the ability to stand as the main character of the story. But there was something in her gaze that hinted at quiet determination, so I resolved to look past the trappings of her station and see what I could find.

Research forms the basis of my work, and I was lucky enough to find the translated diaries of the Romanov family—a treasure trove of dates, names and personal reminiscences. It’s fairly clear that the family as a whole knew that their words would be recorded for posterity, as few entries contain the sort of juicy detail that lights up a novelist’s eyes; however, Olga’s diaries offer tantalizing glimpses of the person behind the title. She makes note of her mother’s infirmities, her words revealing not only a daughter’s dutifulness but the weariness of a longtime caregiver; she writes of Rasputin’s visits to the palace and church prayers, noting the “papery skin” of the seer at Nizhny Novgorod who delivers the empress her final warning.

Most important, Olga’s diaries reveal the desires and preoccupations of a girl on the brink of womanhood, longing for a life outside the defined bounds set for her by her parents: she speaks of dancing on the deck of her father’s yacht with petty officers and wedging herself into wardrobes whilst playing hide-and-seek at her aunt’s tea parties; of listening to the balalaika on summer cruises in Finland and skinny-dipping (really!) in Crimea. She shares slivers of her romances, using code words and acronyms to refer to the objects of her affections: Alexander Konstantinovich Shvedov (“dear AKSH”) and Pavel Vronov (“Schaste”); Dmitri Shakh-Bagov, the dashing Georgian Grenadier she called “Mitya,” her darling.

Olga’s preoccupations shift drastically upon the outbreak of World War I, and except for her entries about Shakh-Bagov, her diary becomes a chronicle of days spent studying for her Red Cross nursing examinations, rolling bandages, and assisting in surgery under the careful tutelage of the inimitable Dr. Gedroits. Here, I admit that I expected to find evidence that Olga’s role as a Red Cross nurse was purely ceremonial, but, like her sister Tatiana and her mother, Alexandra, Olga took her job seriously, filling her days with committee work and hospital shifts, actively contributing to Russia’s war effort. Hardly the actions of a shrinking violet, Olga’s fierce devotion to her country became all-consuming: even when she was taken off surgical duty due to a combination of nerves and exhaustion, Olga lamented the limitations of her own body, wishing she could do more to support her country’s soldiers.

As her wartime committee work might suggest, Olga was also politically aware, taking seriously her military commissions and raising money for war refugees and the destitute, often contributing her own money to causes—and people—she felt deserving.

If this reads like a eulogy for Grand Duchess Olga, there’s reason for it—indeed, the book serves as a eulogy of sorts, not only for Olga and her family but for a way of life that had ended long before Grigori Rasputin stalked the halls of Alexander Palace. But whereas Olga herself deserves our sympathies, her family’s regime might more rightly be said to deserve our scrutiny: under Tsar Nicholas II, Russia had failed to progress as a modern nation. By 1914, the division between wealthy and poor had grown insurmountably vast, and the levers of power, pulled at unpredictable and often baffling moments, were shrouded in mystery. It’s perhaps not surprising that Russia descended into revolution in the final years of Olga’s life: as concerns over Alexei’s condition grew, the emperor and empress withdrew further from the public eye, hiding themselves and their children in the trappings of their position and placing their faith, tragically, in Grigori Rasputin—the one figure for whom Russian society, high and low, could find no sympathy.

Given that context, it’s easy to look at the posed portraits of the last Romanovs and see them not for who they were but as symbols: as icons of a decadent and bloated monarchy; as leaves on a dynastic family tree; as the first victims of the merciless regime that followed the monarchy; as martyrs. Indeed, had ordinary Russians been able to see the grand duchesses for who they really were, rather than as symbols, history might have played out quite differently. Even referring to Olga, Tatiana, Maria, Anastasia and Alexei as children is to reduce them to their symbolic value and deny them their legacies—for even the young can inspire legacies. To me, Olga’s legacy lies in the potential she had, as an individual, as a political figure—and yes, as a grand duchess. A woman I found to be passionate and devoted, dreaming of a world anchored by, but not dependent upon, the love of her family.

Join in on the conversation by picking up your copy!

And then check out the book club kit!

If you’ve already read this amazing title, share your favorite part in the comments!