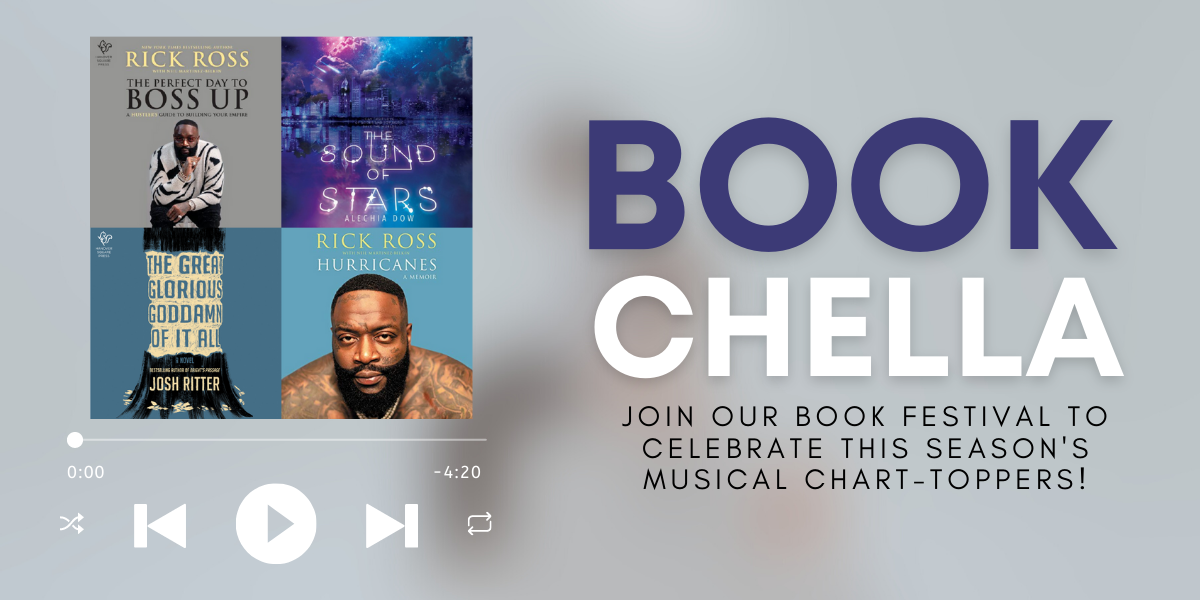 Move over Coachella—bookchella is here! The headliners? Books featuring music and, wait for it, books by musicians. If you’re someone who can’t be without their premium Spotify account, then this one’s for you.

In the tiny timber town of Cordelia, Idaho, ninety-nine year old Weldon Applegate recounts his life in all its glory, filled with tall tales writ large with murder, mayhem, avalanches and bootlegging. It’s the story of dark pine forests brewing with ancient magic, and Weldon’s struggle as a boy to keep his father’s inherited timber claim, the Lost Lot, from the ravenous clutches of Linden Laughlin.

Ever since young Weldon stepped foot in the deep Cordelia woods as a child, he dreamed of joining the rowdy ranks of his ancestors in their epic axe-swinging adventures. Local legend says their family line boasts some of the greatest lumberjacks to ever roam the American West, but at the beginning of the twentieth century, the jacks are dying out, and it’s up to Weldon to defend his family legacy.

Braided with haunting saloon tunes and just the right dose of magic, The Great Glorious Goddamn of It All is a novel bursting with heart, humor and an utterly transporting adventure that is sure to sweep you away into the beauty of the tall snowy mountain timber.

Intimate, insightful and brimming with no-nonsense advice, The Perfect Day to Boss Up is the ideal book for hustlers everywhere.

“A gripping journey.”—PeopleThe highly anticipated memoir from hip-hop icon Rick Ross chronicles his coming of age amid Miami’s crack epidemic, his star-studded controversies and his unstoppable rise to fame.

Rick Ross is an indomitable presence in the music industry, but few people know his full story. Now, for the first time, Ross offers a vivid, dramatic and unexpectedly candid account of his early childhood, his tumultuous adolescence and his dramatic ascendancy in the world of hip-hop.

Born William Leonard Roberts II, Ross grew up “across the bridge,” in a Miami at odds with the glitzy nightclubs and yachts of South Beach. In the aftermath of the 1980 race riots, he came of age at the height of the city’s crack epidemic. All the while he honed his musical talent, overcoming setback after setback until a song called “Hustlin’” changed his life forever.

From his first major label deal to the controversies, health scares, arrests and feuds he had to transcend along the way, Hurricanes is a revealing portrait of one of the biggest stars in the rap game and an intimate look at the birth of an artist.

The Sound of Stars by Alechia Dow

Can a girl who risks her life for books and an alien who loves pop music work together to save humanity? A beautiful and thrilling debut novel for fans of Marie Lu and Veronica Roth.

Two years ago, a misunderstanding between the leaders of Earth and the invading Ilori resulted in the deaths of one-third of the world’s population.

Today, seventeen-year-old Ellie Baker survives in an Ilori-controlled center in New York City. With humans deemed dangerously volatile because of their initial reaction to the invasion, emotional expression can be grounds for execution. Music, art and books are illegal, but Ellie still keeps a secret library.

When young Ilori commander M0Rr1S finds Ellie’s library, he’s duty-bound to deliver her for execution. The trouble is, he finds himself drawn to human music and in desperate need of more.

Humanity’s fate rests in the hands of an alien Ellie should fear, but M0Rr1S has a potential solution—thousands of miles away. The two embark on a wild and dangerous journey with a bag of books and their favorite albums, all the while creating a story and a song of their own that just might save them both.

Isda does not exist. At least not beyond the opulent walls of the opera house.

Cast into a well at birth for being one of the magical few who can manipulate memories when people sing, she was saved by Cyril, the opera house’s owner. Since that day, he has given her sanctuary from the murderous world outside. All he asks in return is that she use her power to keep ticket sales high—and that she stay out of sight. For if anyone discovers she survived, Isda and Cyril would pay with their lives.

But Isda breaks Cyril’s cardinal rule when she meets Emeric Rodin, a charming boy who throws her quiet, solitary life out of balance. His voice is unlike any she’s ever heard, but the real shock comes when she finds in his memories hints of a way to finally break free of her gilded prison.

Haunted by this possibility, Isda spends more and more time with Emeric, searching for answers in his music and his past. But the price of freedom is steeper than Isda could ever know. For even as she struggles with her growing feelings for Emeric, she learns that in order to take charge of her own destiny, she must become the monster the world tried to drown in the first place.

“Mayer lays bare the terrible destiny of a society obsessed with social media stalking and celebrity relationships.” —Julia Heaberlin, bestselling author of We Are All the Same in the Dark

In this raucous psychological thriller, a disillusioned millennial joins a cliquey fan club, only to discover that the group is bound together by something darker than devotion

Day after day our narrator searches for meaning beyond her vacuous job at a women’s lifestyle website—entering text into a computer system while she watches their beauty editor unwrap box after box of perfectly packaged bits of happiness. Then, one night at a dive bar, she hears a message in the newest single by international pop star Adriana Argento, and she is struck. Soon she loses herself to the online fandom, a community whose members feverishly track Adriana’s every move.

When a colleague notices her obsession, she’s invited to join an enigmatic group of adult Adriana superfans who call themselves the Ivies and worship her music in witchy candlelit listening parties. As the narrator becomes more entrenched in the group, she gets closer to uncovering the sinister secrets that bind them together—while simultaneously losing her grip on reality.

With caustic wit and hypnotic writing, this unsparingly critical thrill ride through millennial life examines all that is wrong in our celebrity-obsessed internet age, and how easy it is to lose yourself in it.

What’s your favorite book tied to music? Let us know in the comments below.