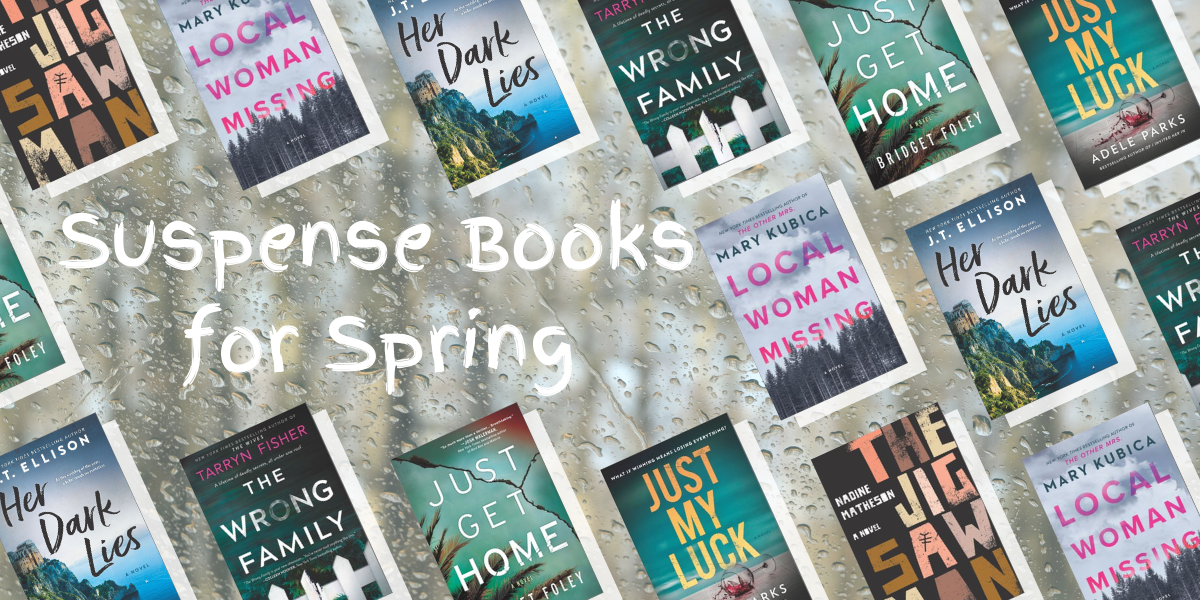 New season, new reads? We think so! Spring into a season of suspense with these thrilling books by J.T. Ellison, Tarryn Fisher, Mary Kubica, and more! These breathtaking, unpredictable, wild and sinister books all deserve a spot on your TBR list.

Her Dark Lies by J.T. Ellison

Fast-paced and brilliantly unpredictable, J.T. Ellison’s breathtaking new novel invites you to a wedding none will forget—and some won’t survive.

Jutting from sparkling turquoise waters off the Italian coast, Isle Isola is an idyllic setting for a wedding. In the majestic cliff-top villa owned by the wealthy Compton family, up-and-coming artist Claire Hunter will marry handsome, charming Jack Compton, surrounded by close family, intimate friends…and a host of dark secrets.

From the moment Claire sets foot on the island, something seems amiss. Skeletal remains have just been found. There are other, newer disturbances, too. Menacing texts. A ruined wedding dress. And one troubling shadow hanging over Claire’s otherwise blissful relationship—the strange mystery surrounding Jack’s first wife.

Then a raging storm descends, the power goes out—and the real terror begins…

The Favorite Daughter by Kaira Rouda

Jane Harris lives in a sparkling home in an oceanfront gated community in Orange County. It’s a place that seems too beautiful to be touched by sadness. But exactly one year ago, Jane’s oldest daughter, Mary, died in a tragic accident and Jane has been grief-stricken ever since. Lost in a haze of anti-depressants, she’s barely even left the house. Now that’s all about to change.

It’s time for Jane to reclaim her life and her family. Jane’s husband, David, has planned a memorial service for Mary and three days later, their youngest daughter, Betsy, graduates high school. Yet as Jane reemerges into the world, it’s clear her family has changed without her. Her husband has been working long days—and nights—at the office. Her daughter seems distant, even secretive. And her beloved Mary was always such a good girl—dutiful and loving. But does someone know more about Mary, and about her last day, than they’ve revealed?

The bonds between mothers and daughters, and husbands and wives should never be broken. But you never know how far someone will go to keep a family together…

Tell No Lies by Allison Brennan

The unsolved murder of a young activist leads to the discovery of much darker crimes in New York Times bestselling author Allison Brennan’s latest compelling thriller to feaure the young, edgy detective Kara Quinn and the loner FBI agent Matt Costa. This time they work to uncover possible ties to a high-stakes cartel in the Southwest desert.

Something mysterious is killing the wildlife in the mountains just south of Tucson. When a college intern turned activist sets out to collect her own evidence, she, too, ends up dead. Local law enforcement is slow to get involved. That’s when the mobile FBI unit goes undercover to infiltrate the town and its copper refinery in search of possible leads.

Quinn and Costa find themselves scouring the desolate landscape, which keeps revealing clues to something much darker—greed, child trafficking and more death. As the body count adds up, it’s clear they have stumbled onto much more than they bargained for. Now they must figure out who is at the heart of this mayhem and stop them before more innocent lives are lost.

Just My Luck by Adele Parks

New from the author of Lies, Lies, Lies and I Invited Her In!

For fifteen years, Lexi and Jake have played the same six numbers with their friends. Over drinks, dinner parties and summer barbecues, the three couples have discussed the important stuff—kids, marriages, careers—and they’ve laughed off their disappointment when they failed to win anything.

But then the unthinkable happens. There’s a rift in the group. Someone is caught in a lie. And soon after, six numbers come up that change everything forever.

Lexi and Jake have a ticket worth millions. And their friends are determined to claim a share.

#1 Sunday Times bestselling author Adele Parks returns with a riveting look at the dark side of wealth in this gripping tale of friendship, money, betrayal and good luck gone bad…

Just Get Home by Bridget Foley

When a devastating earthquake—the Big One—hits Los Angeles, two strangers are brought together by an act of violence and must help each other survive the wrecked city.

Beegie is riding the bus when the quake hits. The teenager was heading back to her unhappy foster home, but then she’s thrown into a broken world. Roads crumble, storefronts shatter and people run wild.

Dessa, a single mom, is enjoying a rare night out when it strikes. Cell towers are down, so without even knowing if her three-year-old daughter is dead or alive, she races to get back across town.

As danger escalates in the chaotic streets, Beegie and Dessa meet by a twist of fate. The two form a fragile partnership, relying on each other in ways they never thought possible, and learn who they really are when there’s only one goal: just get home.

A Good Mother by Lara Bazelon

A gripping debut thriller about two young mothers, one shocking murder and a court case that puts them both on trial.

When a soldier is found stabbed through the heart at a US Army base, there is no doubt that his wife, Luz, is to blame. But was it an act of self-defense? An attempt to save her infant daughter? Or the cold-blooded murder of an innocent man?

Ambitious public defender Abby is determined to win at all costs. As a new mother herself, she wants to keep Luz out of prison and with her daughter. But when the surprises stack up and shocking new evidence emerges, Abby realizes the task proves far more difficult than she suspected and will require a terrible sacrifice.

As the trial hurtles toward an outcome no one expects, Abby, Luz and a captivated jury are forced to answer the question that will decide everything—what does it mean to be a good mother?

In this smart and chilling thriller, master of suspense and New York Times bestselling author Mary Kubica takes domestic secrets to a whole new level, showing that some people will stop at nothing to keep the truth buried.

You Will Remember Me by Hannah Mary McKinnon

He wakes up on a deserted beach in Maryland with a gash on his head and wearing only swim trunks. He can’t remember who he is. Everything—his identity, his life, his loved ones—has been replaced by a dizzying fog of uncertainty. But returning to his Maine hometown in search of the truth uncovers more questions than answers.

Lily Reid thinks she knows her boyfriend, Jack. Until he goes missing one night, and her frantic search reveals that he’s been lying to her since they met, desperate to escape a dark past he’d purposely left behind.

Maya Scott has been trying to find her estranged stepbrother, Asher, since he disappeared without a trace. Having him back, missing memory and all, feels like a miracle. But with a mutual history full of devastating secrets, how far will Maya go to ensure she alone takes them to the grave?

Shared fates intertwine in a twisty, explosive novel of suspense, where unearthing the past might just mean being buried beneath it.

What suspense books are you looking forward to most this season? Let us know in the comments below!

10 thoughts on “Spring Into Suspense with These 10 Thrillers!”