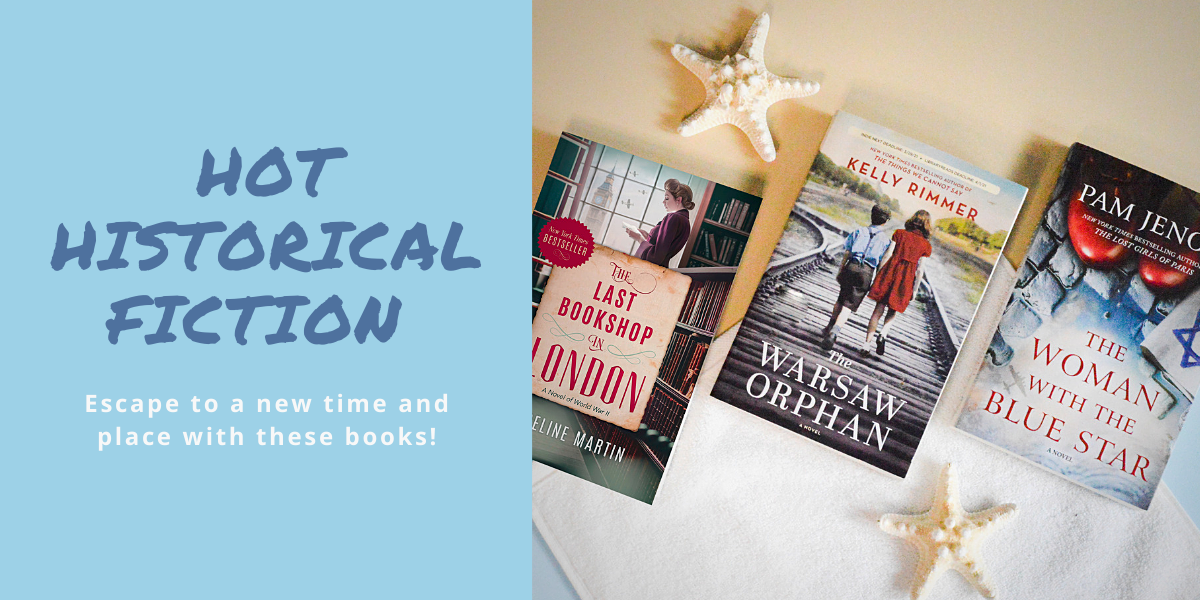 We’ve been sharing all of our favorite summer reads with you since the season arrived. Now, it’s time to get into the hot historical fiction books that have recently landed in our beach bags. From New York Times bestsellers to much-anticipated debuts, these all make for the perfect escape!

The Woman with the Blue Star by Pam Jenoff

Inspired by the true World War II history of the few bookshops to survive the Blitz, The Last Bookshop in London is a timeless story of wartime loss, love and the enduring power of literature.

Inspired by the real-life heroine who saved thousands of Jewish children during WWII, The Warsaw Orphan is Kelly Rimmer’s most anticipated novel since her bestselling sensation, The Things We Cannot Say.

In the spring of 1942, young Elzbieta Rabinek is aware of the swiftly growing discord just beyond the courtyard of her comfortable Warsaw home. She has no fondness for the Germans who patrol her streets and impose their curfews, but has never given much thought to what goes on behind the walls that contain her Jewish neighbors. She knows all too well about German brutality–and that it’s the reason she must conceal her true identity. But in befriending Sara, a nurse who shares her apartment floor, Elzbieta makes a discovery that propels her into a dangerous world of deception and heroism.

Using Sara’s credentials to smuggle children out of the ghetto brings Elzbieta face-to-face with the reality of the war behind its walls, and to the plight of the Gorka family, who must make the impossible decision to give up their newborn daughter or watch her starve. For Roman Gorka, this final injustice stirs him to rebellion with a zeal not even his newfound love for Elzbieta can suppress. But his recklessness brings unwanted attention to Sara’s cause, unwittingly putting Elzbieta and her family in harm’s way until one violent act threatens to destroy their chance at freedom forever.

“A fresh, delightful romp of a novel… this gang of irrepressible friends lives up to their name in sparkling fashion.”—Kate Quinn, New York Times bestselling author of The Rose Code

An extraordinary story inspired by the real Women’s Air Raid Defense, where an unlikely recruit and her sisters-in-arms forge their place in WWII history.

Daisy Wilder prefers the company of horses to people, bare feet and salt water to high heels and society parties. Then, in the dizzying aftermath of the attack on Pearl Harbor, Daisy enlists in a top secret program, replacing male soldiers in a war zone for the first time. Under fear of imminent invasion, the WARDs guide pilots into blacked-out airstrips and track unidentified planes across Pacific skies.

But not everyone thinks the women are up to the job, and the new recruits must rise above their differences and work side by side despite the resistance and heartache they meet along the way. With America’s future on the line, Daisy is determined to prove herself worthy. And with the man she’s falling for out on the front lines, she cannot fail. From radar towers on remote mountaintops to flooded bomb shelters, she’ll need her new team when the stakes are highest. Because the most important battles are fought—and won—together.

This inspiring and uplifting tale of pioneering, unsung heroines vividly transports the reader to wartime Hawaii, where one woman’s call to duty leads her to find courage, strength and sisterhood.

“The Bookseller’s Secret is a delight from start to finish. Michelle Gable skillfully twines the narratives of two effervescent heroines, a modern-day author with writer’s block and her literary icon Nancy Mitford who is struggling to pen a bestseller in the middle of the London Blitz. The result is a literary feast any booklover will savor!”—Kate Quinn, New York Times bestselling author of The Alice Network and The Rose Code

The Flight Girls by Noelle Salazar

Shining a light on a little-known piece of history The Flight Girls is a sweeping portrayal of women’s fearlessness, love, and the power of friendship to make us soar.

1941. Audrey Coltrane has always wanted to fly. It’s why she implored her father to teach her at the little airfield back home in Texas. It’s why she signed up to train military pilots in Hawaii when the war in Europe began. And it’s why she insists she is not interested in any dream-derailing romantic involvements, even with the disarming Lieutenant James Hart, who fast becomes a friend as treasured as the women she flies with. Then one fateful day, she gets caught in the air over Pearl Harbor just as the bombs begin to fall, and suddenly, nowhere feels safe.

To make everything she’s lost count for something, Audrey joins the Women Airforce Service Pilots program. The bonds she forms with her fellow pilots reignite a spark of hope in the face war, and—when James goes missing in action—give Audrey the strength to cross the front lines and fight not only for her country, but for the love she holds so dear.

Do you like historical fiction? Let us know in the comments below!