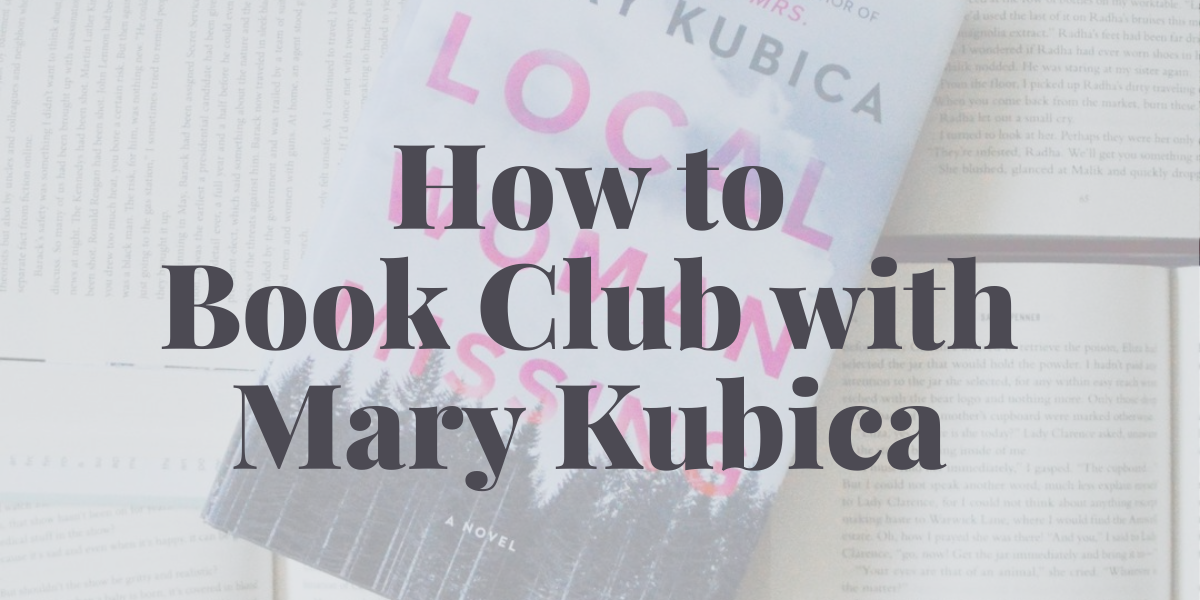 It’s always a challenge to put together a good book club meeting. Trust us, we know. We’ve consulted with master of suspense and New York Times bestselling author Mary Kubica to take the guesswork out of it!

So, book clubs who love thrillers, listen up! Here are three different ways Mary would host a book club with three of her amazing novels. Pick your poison below and make sure to comment which book sounds the best to you by December 31, 2021 for your chance to win a copy of Local Woman Missing!*

For Friends Who Love a Jaw-Dropping Ending

The Good Girl by Mary Kubica

You know it’s a good book club pick when over a million copies worldwide have been sold! The Good Girl reveals how even in the perfect family, nothing is as it seems.

One night, Mia Dennett enters a bar to meet her on-again, off-again boyfriend. But when he doesn’t show, she unwisely leaves with an enigmatic stranger. At first Colin Thatcher seems like a safe one-night stand. But following Colin home will turn out to be the worst mistake of Mia’s life.

Set the tone with some mulled wine and the songs of Skylar Grey’s Don’t Look Down album playing in the background. Trail mix also makes the perfect snack while discussing this rollercoaster of a book!

For Friends Who Crave a
Slow-Burn, Atmospheric Thriller

Did you know that The Other Mrs. is coming to Netflix? Yep! Why not you all read the book before it hits the small screen?

In this twisty whodunnit, Sadie and Will Foust have only just moved their family from bustling Chicago to a coastal island in Maine when their neighbor Morgan Baines is found dead in her home. The murder rocks their tiny coastal island, but no one is more shaken than Sadie.

But it’s not just Morgan’s death that has Sadie on edge. And as the eyes of suspicion turn toward the new family in town, Sadie is drawn deeper into the mystery of what really happened that dark and deadly night.

Take some inspiration from the setting and indulge in some mini lobster rolls and cabernet!Damien Rice’s 9 album will certainly add to the atmosphere.

For Friends Who Are Addicted to True Crime

In Mary Kubica’s latest novel, Local Woman Missing, she takes domestic secrets to a whole new level, showing that some people will stop at nothing to keep the truth buried.

Put on a James Blunt album (Back to Bedlam to be specific) and dig deep into this riveting story. Classic chocolate chip cookies can be washed down with Moscow mules (we promise, it’s a great combination!).

So, let us know…which book will your book club be reading?

*NO PURCHASE NECESSARY TO ENTER.  Purchase or acceptance of a product offer does not improve your chances of winning. Contest opens November 16, 2021 at 9:00 AM EST and closes December 31, 2021 at 11:59 PM EST. Open to legal residents of the U.S. and Canada, excluding Quebec, who have reached the age of majority in their state/territory of residence or older. Void where prohibited by law. One (1) prize available to be won, consisting of (1) copy of Local Woman Missing by Mary Kubica. Prize ARV: $16.99 USD. Odds of winning depend on the number of eligible entries received.  Maximum of one (1) entry allowed per person. Official Rules available online at http://www.bookclubbish.com/contest-rules. Sponsor: Harlequin Enterprises ULC.

87 thoughts on “How to Book Club with Mary Kubica + Giveaway!”